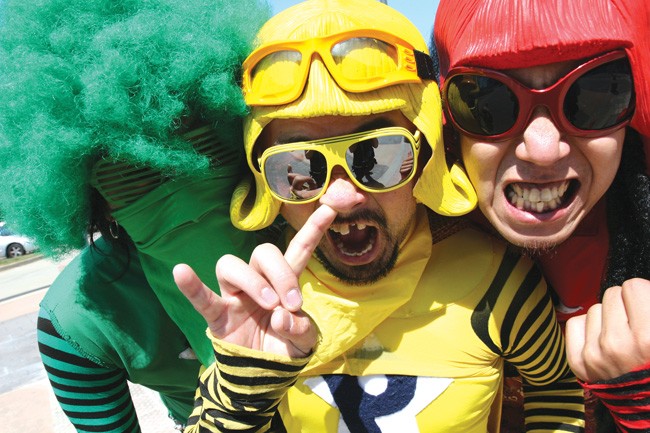 I honestly did want to take in the Downtown Throwdown (Oct. 1), the big downtown block party for Hard Rock’s 40th birthday. Hard Rock, your generosity in throwing the city such a huge free party is not lost on me. And it’s not your fault that I had a personal schedule conflict for the daytime action. But why all the bands that matter played before the dinner hour is a legitimate question.

In their live show, NYC supergroup Phenomenal Handclap Band (Back Booth, Sept. 28) kept almost exclusively to the kinetic side of their funky, postmodern scramble of disco, rock, soul and prog. And it was enough to close the gaps between a surprisingly thin audience, kicking up a real dance party that elevated some people to shit-losing levels. It ain’t deep, baby, and it’s a little goofy, but it’s built to move and groove. And it was decent of the drummer, an Orlando boy, to give a nice shout-out to the late Ralph Ameduri (a joyous “moment of nonsilence”).

But the night’s best news is that local A/V rhythm act Sloppy Disk, who opened, is still alive. They’ve been absent enough lately to warrant concern over their future, but they’re back. If you haven’t checked ’em out yet – and not nearly enough of you have – wait no longer. They’re one of the most original acts this scene has birthed, and they blow new minds with each performance. Sampling from music videos that span American pop, J-pop and rap genres, even commercials, their audio-visual performance manipulates the smallest yet most dynamic slivers of sight and sound, sets them to a live drummer and turns them into experimental, multi-sensory fireworks. Like a bangin’ cousin of the Books and Negativland, their mash of pop-cultural detritus is built of basic building blocks, but it’s very high-concept.Engaging, funny and inventive, their shows are truly a sight to see. And principal Jonathan Taylor tells me they’re recording soon, so stay tuned and keep an eye out for their shows.

Speaking of fantastical Japanese pop-cultural outlooks, New York’s Peelander-Z (Sept. 29, the Social) isn’t exactly my thing, but I had to go just to witness what kind of wild weirdness the action-comic punk band musters live. And this shit is like cartoons brought to life. With all its over-caffeinated pacing and wacky sensibility, their set is like a bizarre kid’s show blown out into a full rock concert. Like their occidental predecessors the Aquabats, only with better music, they involve costumes, characters, props, crowd participation, skits and, of course, maximum geekdom. At one point, they turned into huge animals and played baseball inside the club. With their elaborate and involved show, it’s obvious why they thrill fanboys and fangirls. They’re a must-see, at least once.

Over on Mills, Charlotte, N.C., band Matrimony (Will’s Pub, Sept. 29) impressed with an unusually sultry take on folk music. Placing rustic acoustic instruments (guitar, banjo, mandolin) alongside contemporary singing styles, vibe-rich keys and a rock rhythm section, they’re an indie-rock translation of American and Irish folk. Making them exceptional, however, is their polished and purposeful sense of melody and composition. Coming up with a refined, modern take on folk music without sounding sanitized and gutless isn’t the easiest thing to do, so credit is due them.

Melodically, I’ve never quite gotten on the wavelength of alt-folk headliner Langhorne Slim, but at least it can be said that it’s an identifiable and intriguing one. His music’s fiery, has legitimate soul and goes somewhere. And I think something clicked for me at this show.

All I could substantively glean from the xFalxcorex Festlineup (Oct. 1, Hoops) is that it mysteriously featured lots of bands from Palm Bay and lots of post-hardcore. Of the three or four I bands I caught, the one that really struck me was Gillian Carter. Like a swooning dance between Explosions In the Sky and At the Drive-In, their moody, heavy blend of post-rock and post-hardcore is massive, dramatic and well put-together. Even in the somewhat limited sonic capabilities of Hoops, they managed miles of expression.

Florida used to be reasonably fertile ground for post-rock. But aside from Bestiarii, it’s unfortunately become a fallow genre around here; all the more reason to welcome these guys warmly to Orlando. And start paying attention, because there’s something happening on our East Coast.