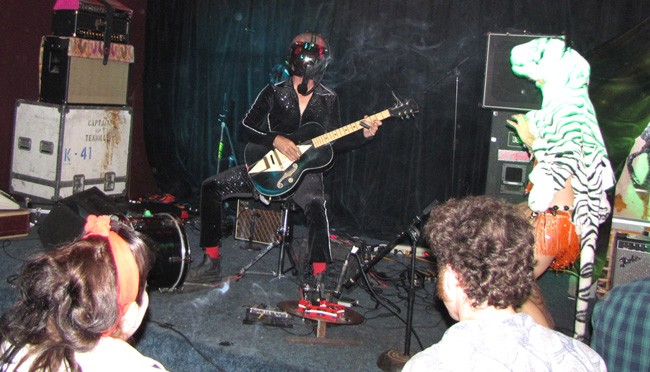 Take it from your city's music

Unsane's thuggish new record, Wreck, had me pretty amped to see them. I saw the noise-rock legends in 2010 at the big Amphetamine Reptile 25th Anniversary Bash in Minneapolis and was surprised by how thin they sounded. But after the show here (April 23, the Social), clearly the fault was in the sound at Grumpy's Bar, because they completely pulped my face. For some reason, their drummer was in the hospital, so rhythm duties were split between the two drummers of tourmates the Melvins, Dale Crover and Coady Willis. Yeah, not exactly a bummer, right? And when they both finally stepped out to play alongside one another to conclude the set, well, wow. This dynamic duo's side-by-side attack is a colossus.

Finally seeing Tim Barry perform solo (April 24, the Social) was a journey from skepticism to redemption. Although he's best known as the frontman for Avail, he's made inroads on his own as one of the luminaries of the folk-punk movement. I'm down with that whole scene but, musically, I just don't regard him as one of the genre's exemplars.

A little way into the performance, Barry's emotional authenticity and the connection it fosters with fans started to sink in. He drew practically the entire assembly down onto the floor without any of those awkward rock-guy entreaties, just his own natural gravity.And the kinship was such that both he and the gathered were most comfortable when he just took the show down to the floor in the middle of the audience, something he did twice.

The deeper Barry got into the show, the more he conversed between songs. He's one of those rare exceptions of the less-talk-more-rock rule, because that's when his real essence came out. His stories, perspective and sheer humanity lent the music bite and meaningful context, even sometimes making the good ol' boy openly emotional. And that's when it struck me - this is some real shit here. This guy opened a vein before my eyes, and now I get it. He's so astoundingly present and in the moment that, after seeing what he gives out, I understand why his fans respond so much in kind. What brings him and his believers together is the need to feel. It's something that cuts through fashion and faction. And that's something.

I went from “meh” to liking him to ultimately loving him. Gotta respect anyone who can turn you around like that.

But one dude I've never had a drop of uncertainty about is Bob Log III (April 26, Will's Pub), the first of this week's double heaping of the blues, this one with extra gravy. One of the most indisputably original artists working, the Arizona one-man band shreds madcap blues-punk that turns the Delta on its head. Beyond the schtick, he's a brilliant bluesman. And the best part is that he's completely unbeholden to the orthodoxy of the institution.

Still, his heroically ridiculous persona is a thing of transcendental inspiration. Imagine Mitch Hedberg reborn as a virtuosic but deranged Delta blues gunslinger with a sweet-ass wardrobe, and that's Bob Log. Southern culture on the skids? Nah, man, this is Southern culture in outer space. And he is very possibly the coolest motherfucker alive. Unless you've seen his insane show live, you can't possibly know how big a deal it is every single time he's in town.

Speaking of wicked slide guitar, Brooklyn two-piece Boom Chick swung through again (April 28, Will's Pub) and, hoo boy, can frontman Frank Hoier rev it up and down the strings like hot sizzling grease. With a more appropriate setting and lots of new material with redlining rock octane, both players looked more energized this time with a performance that sometimes even threw flames. You should consider yourself lucky any time a good band sets its sights on your city. Right now, Boom Chick is one of them. Most of you haven't seen 'em live yet, but know this: They have unanimously electrified the room every time I've seen them perform. So trust me on this one. This is one band we want here as often as possible.