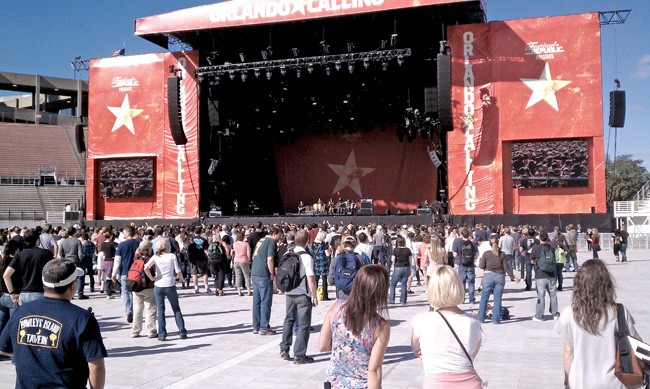 The ultimate depth of its footprint lies inwhether it becomes an annual affair, but history was made this past weekend with the debut of Orlando Calling (Nov. 12-13, Florida Citrus Bowl), the new go at an American music festival by U.K. mega-promoters Festival Republic (Reading, Leeds, etc.). According to organizer Melvin Benn, the weather here was a big factor in selecting our city. And, boy, did we deliver on that count with postcard-perfect conditions. Finally, someone was smart enough to capitalize on our gorgeous autumns.

As for the event itself, the logistics and infrastructure were first-rate. These guys know their shit when it comes to large-scale events. The Citrus Bowl grounds were alchemically morphed into a cohesive festival village that makes Warped Tour look like Bartertown. With easy wayfinding, ample amenities, immaculate groundskeeping, highly transformative gestures and decent food offerings that even incorporated some of our bustling food truck scene, Festival Republic harnessed the natural appeal of outdoor festivals without the off-putting grunginess that often accompanies them.

With the exception of the Art House stage, a tiny tent, all the other progressively larger stage setups were totally pro – nice, big video screens flanked the two largest stages. Most importantly, they achieved good outdoor sound quality – no small feat in itself – that even allowed Iron & Wine’s nuanced music to be captured robustly, with all of its details honored. Moreover, sound spillover was generally well managed.

Although the large bowl felt sparse, all the other stages looked reasonably populated. But then Benn told WFTV Channel 9 that the turnout was half what his target was, resulting in a loss of about a couple million. I suspect and pray that it’s due to the somewhat safe, half-stepped lineup. People can sense that and will respond accordingly. And when you charge almost $90 per day, people have a right to high expectations. (And charging $10 for laminates of basic informational tools like a map and schedule is just gross.) However, Benn also said it usually takes about three years for festivals like this to turn a profit, so there’s hope. And there’s plenty of reason I hold hope for this thing.

Sure, there’s much that music snobs could complain about (by definition, there always is). But to attempt something of this size, something that needs sheer volume to work, the fact that some taste was evident in the talent selection deserves credit. It could’ve been a thousand times worse. Yes, there were cornball American caricatures like Kid Rock and not enough representation of hip-hop and new blues. But the festival could easily have featured the dumb, sassy pop music that passes for country nowadays instead of the truer traditionalist (Dwight Yoakam, Del McCoury) and alternative country veins (Lucero, Drive-By Truckers).That demonstrates more authenticity of taste from a buncha Brits than much of Middle America right now. (Fuck, just look at today’s country charts.) Moreover, instead of honoring our indie rock (Pixies, Iron & Wine), the organizers also could’ve just stuffed the bill with today’s most soulless commercial pop just for a cash grab. But, for the most part, they didn’t. Also, I’m always going to advocate for our local musicians, and that, too, could’ve been better. But for an attraction-minded fest designed to draw traveling attendees, incorporating locals at all is fairly responsible.

It would be a great thing for the city if Orlando Calling eventually proved sustainable, if anything just for the boost of activity, culture and name recognition for us. The numbers weren’t what the organizers wanted, but they produced a legitimate music festival with a real festival atmosphere. Here’s hoping that they’ll commit to working to build this festival, because the people who attended this maiden one were enthusiastic. And it’s always nice to see that kind of energy and vibration. So, yeah, I’ll take primetime action like this for us. It’s not the end-all. But it is a nice, internationally iconic addition to our scene. Only good things can come from hordes of fans looking to Orlando for music. Believe it or not, that benefits even the most underground corridors of our scene. Like many of you, I always want things to be perfect. But I know when something pretty good is in front of me. And this is my bid for its return.