Our live music critic takes on Crocodiles, Pomegranates, Man or Astro-Man? and more. 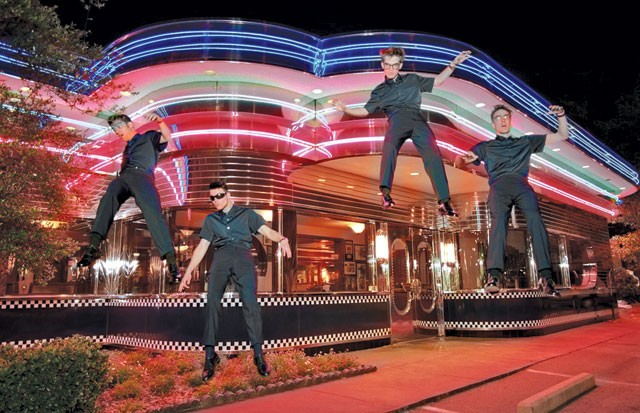 Nice job on the music voting in this year's Best of Orlando issue, people. Besides the bands that clearly placed through aggressive online campaigning, you guys voted for some really deserving acts this year. And, whoo, what a party – stormtroopers and all! (The Star Wars variety, not the German kind. That would've been a different and totally not fun kind of party altogether.) And DJ Diddles, who spun our event, kicked out some sweet old-school jams (Ghost Town DJ's, yuh!). So big ups to him.

But even with our own massive party going on next door at the Beacham, the one-two knockout bill of Crocodiles and Eternal Summers (July 18, the Social) was a big enough deal to look eagerly forward to even through all the insane OW pageantry.

I absolutely love Correct Behavior, the new album by Virginia's Eternal Summers. It's a real breakthrough in terms of quality. That said, they're still not quite equal to it live. They were, however, good enough to dig on, and the fact that they're now working from a legitimately strong songwriting base of greater dimension and hooks is significant. Although passably attractive, they were but a preciously fleeting jangle-pop diversion before this hotwired record. Now it's on.

San Diego headliner Crocodiles are also riding their best album yet with Endless Flowers. Despite that record's cleaner and brighter sound, however, their live show is still firmly on the Mary Chain gang – thick with noise and reverb. But like Eternal Summers, their songwriting foundation boasts newfound heft and color and finally matches the size of their sonics.

The reconstituted Man or Astro-Man? coming to town (July 19, the Social) was already a pretty big deal. But the opening addition of the Ultras S/C is what got me pumped. The band's got Be Your Own Pet's Jemina Pearl in it, though I think the groups that BYOP alums have formed afterward (JEFF the Brotherhood, Turbo Fruits) are far superior. The real pulse-kicker is that it also featured Chet Weise from the almighty Immortal Lee County Killers, one of my personal Hall of Fame bands and one that shook me to the core when I first experienced it. And turns out, the Ultras' star-studded lineup is completed by Ben Swank of the Soledad Brothers.

Their sound is a primal hash of punk, rock and shades of Weise's "fucked-up blues" aesthetic. And although they still sound developmental, their raw, frayed-nerve rock & roll positively sparks with exciting elements. And Weise and Pearl are gutsy performers.

As for the Astromen, it was actually my first time seeing the underground legends. Aside from all the showmanship of astronaut jumpsuits and campy space videos, they simply sounded great. Their raging, aggressive brand of full-throttle surf rock beamed with beautiful tone, tumble and energy. They somehow make the utterly vintage style feel fresh, throbbing and essential. Besides, having a theremin that bursts into flames and a Tesla coil as part of your act is some serious shit.

I'm not sure exactly what occurred during the bulk of L.A. band Kitten's set (July 21, Backbooth), but all I know is that I walked into a finale where teenage singer Chloe Chaidez was full-body rocking out with such forceful abandon that I found myself actually worried that some head-splitting event was gonna happen with all those sharp guitar headstocks and mic stands in her vicinity. Get it, girl.

Cincinnati headliner Pomegranates is the second band after Crocodiles this week to finally make it here after prior cancellations. Besides all being very, very blond, these guys also suited up in all-white clothes, giving them kind of an albino vibe. But unlike their look, their tight, crisp and shining indie-pop has an utterly natural way. It's a sharply etched sound that's lighthearted, high-spirited and effervescent.