Our live music columnist takes on El Ten Eleven, the Globes and Matt Butcher and and points out two ongoing events designed to get Orlando musicians' feet in the door 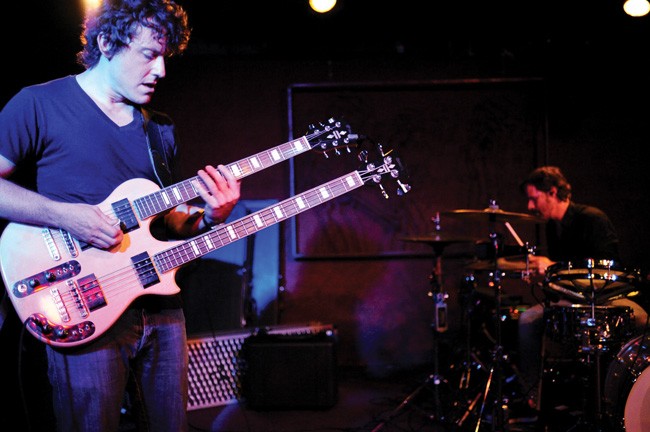 Lots of musicians want to break into the scene here. And there are almost as many people out there representing themselves as informed conduits to help you do that. But most of it’s bullshit.

However, local scene-movers Swamburger and Walt Breezy (Babyluv Productions) are behind some serial events representing two basic levels of effort. Please Listen to My Demo (Aug. 19, Blank Space) is the free, entry-level tryout where artists get face-to-face feedback from a handpicked panel of label owners, promoters and booking agents. The next tier, Freshman 15 (Sept. 1, Back Booth), is a test of actual hustle, where acts mobilize their fan base to attend a gig for a possible monetary payoff, just like in real life.

Normally, I’m suspicious of the motives behind such events. But one thing I know about Swamburger is that his grass-roots ethos and heart are both genuine and tested. Beyond fronting local-group-gone-national Solillaquists of Sound, he’s fiercely devoted to spreading street fundamentals and getting good talent noticed. To be considered, forget Facebook. Email Swam ([email protected]) or, better yet, approach him in person, out on the street.

Local twangster Matt Butcher is headed to Nashville. Even though it’s not the bastion of country legitimacy that it once was, it is on a notable upswing (albeit in other genres). As the earliest journalist to cover Butcher’s identity-defining voyage into country from his start with the Heathens, it fulfills me to see that this trip looks like it’s really going somewhere. He’s grown up before our eyes, and with his accomplished new album Ghostwriting, he has truly arrived as a marquee man.

Although the chatty crowd was a little too into the party aspect of the event and not enough into the performance, the city showed its love by stuffing the house for Butcher’s record release party and farewell show (Aug. 13, the Social). My preference is always that they stay and fuel our critical mass, but I’m OK with sending off good artists if we’ve groomed them well and they don’t forget their roots. Remember, kiddo, we gave you the springboard. The least you can do to ease the pain of brain drain is to be a good ambassador and spread the Orlando gospel. Now flex those wings and represent.

But the beat goes on, and now the Americana crown is up for grabs. The exciting question is, “Who’s gonna command it?” C’mon, step up.

Something happened between the last time El Ten Eleven played here and this time (Aug. 10, Back Booth) – something big – because attendance at this show was easily triple that of the last one. Good for them, good for us. Matching the turnout, they came with a notably bigger show, intensified with lights and video.

The duo’s loop construction uses technology and trickery with enough inspired technique to impress even hidebound live traditionalists. Their most winning quality, though, is that they never lose sight of the song and its connective, stirring purpose. As serious as their craftsmanship is, it’s built for joy. With groove rock that can please eggheads as much as plain revelers, El Ten Eleven is the rare kind of rock band that could even turn out a dance crowd. They break ground and max the possibilities of a two-piece band, all without taking themselves too seriously. Everything is there to serve the motion of the room. And everyone went nuts for it, to a point that seemed to surprise the band. So let this be the beginning of a long love affair with Orlando.

Opening were the Globes, a young Washington state band on the esteemed Barsuk Records label. Their spring debut LP, Future Self, is passably interesting, but not incisive. Although filled with instrumental angularity, their music tends to feel detached on record. This kind of brainy indie rock is tricky to capture effectively on tape. Oftentimes, a glass menagerie approach is taken because of all the little, meticulous details, but it can leech it of basic human energy.After seeing how gripping their quirky tension is live, there is something key in what they do that’s missing in their recordings. If they can’t bottle that essence of personality, they’ll always be rendered bookishly sleepy. That’s far less than what they conveyed live, and that’s a shame.