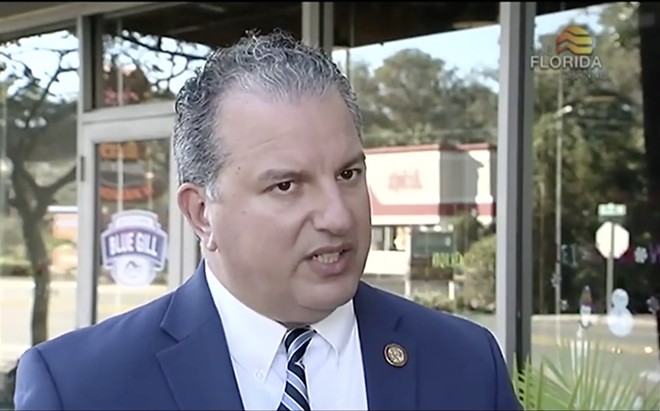 Florida will pull $2 billion from the largest asset-management firm in the world over ideological differences.

State Chief Financial Officer Jimmy Patronis announced Thursday that Florida will immediately freeze about $1.43 billion in long-term securities and about $600 million in short-term overnight investments managed by BlackRock because of the firm’s use of “Environmental, Social, and Governance” standards — known as ESG.

Patronis in a prepared statement said he doesn’t “trust BlackRock’s ability to deliver” and “BlackRock CEO Larry Fink is on a campaign to change the world.”

“Whether stakeholder capitalism, or ESG standards, are being pushed by BlackRock for ideological reasons, or to develop social credit ratings, the effect is to avoid dealing with the messiness of democracy,” Patronis said.

Republican leaders in Florida and across the country have targeted ESG ratings, which can involve considering a wide range of issues in investments, such as companies’ climate-change vulnerabilities; carbon emissions; racial inequality; product safety; supply-chain labor standards; privacy and data security; and executive compensation.

Patronis said the state Department of Financial Services oversees about $60 billion and that the money with BlackRock will be moved “elsewhere.”

“I think it’s undemocratic of major asset managers to use their power to influence societal outcomes,” Patronis said. “If Larry [Fink], or his friends on Wall Street, want to change the world — run for office. Start a non-profit. Donate to the causes you care about. Using our cash, however, to fund BlackRock’s social-engineering project isn’t something Florida ever signed up for.”

Fink is a leading proponent of ESG metrics. In a letter this year to corporate executives, Fink said companies using the standards are "performing better than their peers."

"Stakeholder capitalism is not about politics," Fink wrote. "It is not a social or ideological agenda. It is not 'woke.' It is capitalism, driven by mutually beneficial relationships between you and the employees, customers, suppliers, and communities your company relies on to prosper.”

As part of an October quarterly report, Fink said the New York-based BlackRock is built “to meet our clients’ needs across all market environments.”

“We continue to evolve our organization, think comprehensively about our clients’ portfolios and innovate ahead of their needs, all of which is deepening connectivity across our platform,” Fink said in the report. “We are uniquely positioned to serve our clients’ needs with integrated investment management, technology and advisory expertise. And we are relentlessly committed to bringing together the best of BlackRock in order to deliver better outcomes that will benefit our clients, employees and shareholders.”

The financial-advice firm Motley Fool noted in October that BlackRock manages nearly $8 trillion in assets and “keeps soaking up Wall Street's cash and saw strong demand for its investment offerings in the third quarter.”

Patronis’ announcement came a day after he participated in a panel discussion on the “efforts to combat Environmental, Social, and Governance policies” during an event held by the conservative American Legislative Exchange Council in Washington, D.C.

In August, Patronis, Gov. Ron DeSantis and Attorney General Ashley Moody, in their roles as trustees of the State Board of Administration, approved a resolution that directed pension-fund managers against using ESG ratings when investing state money.

During an address to the House during a Nov. 22 organization session, Renner called for investment changes by the state to move away from Wall Street companies that have adopted “radical environmental and diversity goals.”

Renner called the ESG practice an “ideological sham” that "increases our cost of living, undermines our national security, and bypasses the checks and balances of the democratic process.”