The Woman in Black

A horror outsider reinvigorates the genre with loving homage 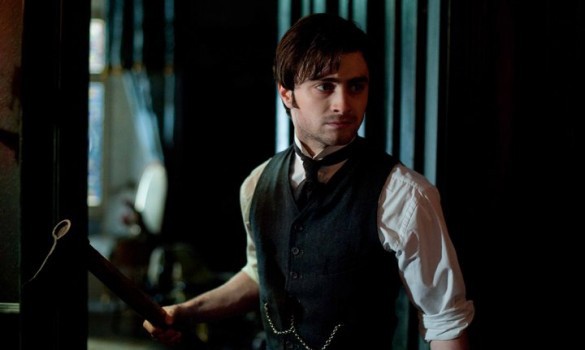 The Woman in Black

Forget Harry Potter. Forget even Daniel Radcliffe. Although he’s been the focus of the publicity for the new adaptation of **The Woman in Black**, he is not the star – the film is. And that’s how it should be, as director James Watkins allows the images and sounds to dominate this haunted-house horror, the scariest such film since Juan Antonio Bayona’s **El Orfanato** (**The Orphanage**) five years ago.

Based on the 1983 book by Susan Hill, the movie tells of a young lawyer sent to an isolated English village around the turn of the last century to organize the estate of a woman who has recently passed. What the solicitor hasn’t been told is that the house, and the family who lived and died there, have seemingly laid a curse on the town.

The book inspired not just an excellent 1989 British TV movie but also a successful London play that opened that same year – and is **still** running. (Only Agatha Christie’s **The Mousetrap** has run longer in the West End.) I saw it several years ago, and while it was certainly worthwhile, it didn’t seep into the brain the way a gothic ghost story should. Cinema, after all, is more suited to horror because the director and cinematographer can tell you where and how to look, whereas the theater director is powerless in that regard. The latter can direct his actors but not his audience.

Watkins clearly understands this power of manipulation and exercises it well, especially for a director with just one previous major credit to his name. (He helmed the well-received 2008 British horror **Eden Lake**, although that film was far bloodier and more modern.) Despite his inexperience with this genre, or maybe because of it, Watkins feels the need to lean on – superbly, if a tad too heavily – every classic horror-movie trick. He employs creepy siblings out of **The Shining**, jarring suicides inspired by **The Omen**, spooky mediums and self-moving doors from **The Others**, audio terror courtesy of Robert Wise’s **The Haunting** and even a surreal talking bird indebted to **The Third Man**. And let’s not leave out the creepiest mechanical toys this side of Joseph Mankiewicz’s **Sleuth**.

Surprisingly, the failings of **Woman**, which threaten to derail it in the third act, are ones of plot, not style. Departing unnecessarily from the previous versions, Jane Goldman’s screenplay takes a brief, odd turn, stretching believability and lessening the remarkable tension that Watkins has built. It’s not that the film has been realistic until that point – it is a ghost yarn, after all – but it’s at least been true to itself. Movies, after all, aren’t about creating realism; they are about making you believe the unrealistic is real.

“If we open the door to superstition, where does that lead?” asks a villager (an excellent Ciarán Hinds). Despite the failings of the script, in this case it clearly leads to terror.