THE VAST MATRIX!!! ... and other fun facts from this morning's "electronically challenged" hearing on TEXTGATE

This morning, the sleeping giant of inappropriate public-official fingerplay was reawakened when attorneys representing Citizens for a Greater Orange County and, well, Orange County matched wits in a case-management conference on the 18th floor of the Orange County Courthouse. At issue – at least for today – was the fact that the two requests for public records consisting of errant text messages ("girltalk") have yet to be fully realized, and there is a risk that the information (specifically the texts deleted from several commissioners' phones) could fall off the devices if they aren't properly secured soon. Surely you remember what we're talking about when we say "textgate," so we won't go into to detail further than this: Commissioners were allegedly (and actually) taking cues from iPhone chats with lobbyists when they basically (and maybe illegally) withheld the earned sick-time ordinance from this year's ballot back in September. Anyway, today's hearing was more of a procedural affair to set up a time-frame for an actual trial, but, in addition to reminding us what we did last summer, it provided it's share of bizarre revelations which we've archived for you below. 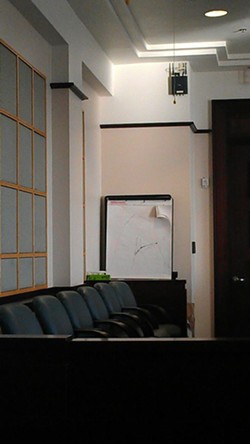