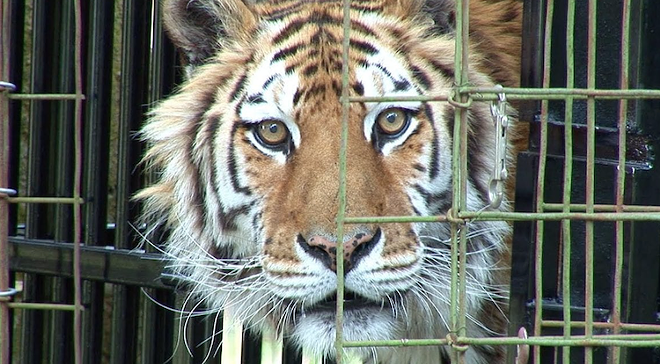 This morning a volunteer at Tampa’s Big Cat Rescue, nearly had her arm ripped off from the shoulder by a tiger.

The victim was Candy Couser, who has volunteered at the animal sanctuary for nearly five years. The tiger, Kimba, reportedly grabbed Couser's arm and nearly tore it off at the shoulder while she was feeding it. Staff members then rushed to her side, pulled her arm out of the cage and applied a tourniquet to stop the bleeding. They then placed "her arm in ice packs to try and save it."

Couser is now being treated at St. Joseph's Hospital in Tampa.

Kimba is now being placed in quarantine for 30 days, says the animal sanctuary. According to Big Cat Rescue’s website, Kimba has led a tortured life, and was among a group of tigers that coincidentally ate a guy’s arms in 2018 at the  Hermanos Ponce Circus in Guatemala.  The male tiger was born sometime in 2017, and arrived at Big Cat Rescue in 2019 from Guatemala – along with two other tigers, Max and Simba – after the country passed a law banning circuses.

Big Cat Rescue found out about the cats after a 2018 Daily Mail story highlighted starving tigers that ripped both arms off a 55-year-old man and ate the limbs, while villagers attempted to free him by throwing sticks and rocks.

According to the Daily Mail, the man’s arms were eaten while he was attempting to reach into the cage to give the tigers a water pail. It’s unclear exactly which tigers ate the man’s arms.

After the circus was ordered to be shut down, the owners reportedly went on the run with the tigers and were eventually tracked down in June of 2018. Local authorities and activists with the Animal Defenders International implemented a rescue mission. During which, Kimba was beaten with an iron bar; the tiger bled until ADI officials intervened.

A statement released Dec. 3 by the ADI says that Kimba was one of the 15 tigers removed from the circus, but was not directly responsible for eating the man's arms. "The tiger involved in that incident was another male, Itza, who now lives at the ADI Wildlife Sanctuary in South Africa," says the ADI. "Itza was identified to ADI as the tiger responsible by the government officials who had investigated the incident, as well as the circus owner and staff. Itza was living with a group of tigers in a different cage to Kimba, who was living alone in a cage on a different trailer alongside male tigers Max and Simba, who now also live at BCR. Kimba and the other two cats were then flown to Miami and driven to Tampa on Nov. 25, 2019, where they've remained for the last year."

Big Cat Rescue CEO Carole Baskin responded to today's incident by stating that the partial limb removal happened because Couser did not follow safety protocols. "Kimba had been locked away from that section for several days as cameras were being installed there," said Baskin. "She opened a guillotine tunnel door at one end of the tunnel, and when she went to raise the second door she saw it was clipped shut. This is our universal signal NOT to open a gate without the coordinator coming to assist, but Candy said she just wasn't thinking when she reached in to un clip it. It is against our protocols for anyone to stick any part of their body into a cage with a cat in it. Kimba grabbed her arm and nearly tore it off at the shoulder."

The Florida Fish and Wildlife Conservation Commission’s Division of Law Enforcement is investigating the incident.

This isn't the first time a volunteer at Big Cat Rescue has been mauled. In 1998, Mindy Harrell of Odessa received 451 stitches on her right arm after a leopard named Jamongee removed the skin from her elbow to her wrist after she was petting its paws through the cage.

Big Cat Rescue was featured in last summer’s Netflix hit documentary Tiger King: Murder, Mayhem and Madness, which starred Baskin and her nemesis Oklahoma zookeeper Joseph Maldonado-Passage, aka Joe Exotic. In the documentary, one of Exotic's staff members, Kelci "Saff" Saffery, also had his arm ripped off by a tiger, which prompted the infamous line, "I'm never going to financially recover from this."

*The original version of this article had Saffery's pronouns as they/them, we apologize for that error.