The November election is a test. If we fail, we might not get another chance 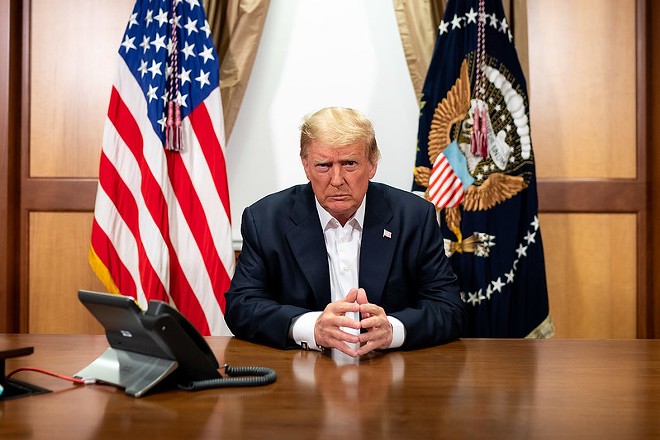 This election is a test.

If we pass, this will be the first of many such tests in the years to come.

If we fail, I’m not sure we’ll get another chance.

Failure probably means that our institutions and media weren’t robust enough to prevent a conspiratorial authoritarian and his cadre of goons and lackeys from perverting an election. Failure almost certainly means that anachronistic, anti-democratic compromises forged 233 summers ago in Philadelphia have again handed undeserved power to the white conservative ruling class. But most of all, failure means that enough of us looked Donald Trump in the eyes for four years and decided that his America – corrupt, incompetent, racist, angry, mendacious, cruel, vain – was what our country should be.

I can think of no more damning an indictment.

There is more than sufficient evidence of the president’s unfitness for the job he holds. Consider his first 44 months in office empirically, through the prism of key data points.

● 3.9 million: lost jobs, the most of any presidential term, as of September.

● 69,550: migrant children the Trump administration held in custody, separated from their parents, in 2019.

● 15,000: refugees the Trump administration will admit into the United States next year, a record low.

● 20,000-plus: lies and false statements as of July 9, according to the Washington Post.

● 23,039: presidential tweets through Sept. 29, according to the Trump Twitter Archive.

● 3: American presidents who have been impeached, including Donald Trump.

Qualitatively, however, the events of last week should shred any lingering doubt.

Begin with the New York Times’ blockbuster investigation into Trump’s tax returns, which was at once revelatory yet told us little we shouldn’t have already surmised. The salient points: Despite his incessant self-promotion, he’s a shitty businessman who, despite being bailed out by proceeds from The Apprentice, is in hock up to his neck, with more than $300 million in debt about to come due. He’s probably a tax cheat. He’s definitely a tax avoider. He’s been under audit for a decade after claiming a dubious $73 million tax refund. And, naturally, he’s a walking conflict of interest.

Move to Tuesday night’s debate, where he spent 90 minutes behaving like a toddler who found his uncle’s meth stash. Alongside the petulance and perpetual interruptions, Trump refused to condemn white supremacy, told the Proud Boys to “stand back and stand by,” encouraged his supporters to engage in voter intimidation, insisted (falsely) that the November election would be marred by fraud, and mocked Joe Biden for wearing a mask and not holding huge rallies.

The next night, while the White House furiously denied that Trump was a racist, Trump held a rally in Minnesota, where he attacked Democratic congresswoman Ilhan Omar, who immigrated to the U.S. as a Somali refugee in 1995, when she was 12. “How the hell did Minnesota elect her?” Trump asked. “What the hell is wrong with you people – right? What the hell happened?”

Then Trump cranked up the xenophobia: “Another massive issue for Minnesota is the election of Joe Biden’s plan to inundate your state with a historic flood of refugees. Seven hundred percent increase, refugees, coming from the most dangerous places in the world, including Yemen, Syria and your favorite country, Somalia, right? Biden will turn Minnesota into a refugee camp.”

Meanwhile, the president’s allies in the swing states of Wisconsin, Texas and North Carolina have rallied to his voter-suppression calls, making it more difficult to vote by mail with dubious claims of fraud as more Democrats choose that option.

But, of course, the week’s biggest news came early Friday morning, when Trump confirmed that he and the First Lady had tested positive for COVID-19, having apparently contracted the virus from adviser Hope Hicks.


I don’t wish the president ill. But the diagnosis was karmic retribution, not just for spending months downplaying the disease while thousands died, or for demanding that states recklessly reopen their economies, or for refusing to wear a mask in an arrogant display of toughness, but also for mocking Hillary Clinton precisely four years earlier, after she came down with pneumonia.

Here again, though, Trump’s comeuppance is less a cause for sympathy than a demonstration of his ineptitude. It’s not merely that his inaction allowed the virus to spread beyond control. It’s that, despite the enormous weight of his office, he and his coterie refused to take even the most basic precautions. His family refused to wear masks at Tuesday’s debate. Even after learning of Hicks’ diagnosis, Trump attended a fundraiser on Thursday night, sans mask or social distancing, putting his own donors at risk.

Time and time again, through word and deed, Trump has shown us that he has neither the temperament nor the capacity to handle the presidency. He has proven incapable of rising to the moment, of seeing the world beyond himself, his need for adulation, and his own petty grievances.

This election is a test. If we fail – if those who champion or even acquiesce to corruption and vindictiveness and bigotry aren’t just defeated but crushed into powder – I fear the republic soon won’t be worth keeping anymore.


—
Please follow CDC guidelines and Orange County advisories to stay safe, and consider supporting this free publication. Our small but mighty team is working tirelessly to bring you news on how coronavirus is affecting Central Florida. Every little bit helps.