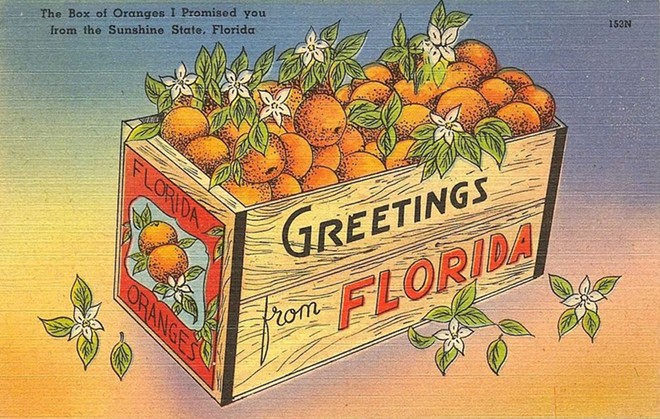 Vintage postcard via Florida Memory
Travelers might again get a free cup of Florida’s homegrown beverage when they cross the state line, through funding tucked in the Senate’s proposed budget.

But helping the Department of Citrus bring back free orange juice could hinge on a bigger debate, as the operations of state welcome centers remain locked in a legislative battle about the fate of the tourism-marketing agency Visit Florida.

The Department of Citrus last July eliminated free juice offerings at welcome centers along Interstate 10 west of Pensacola, Interstate 75 near Lake City and Interstate 95 near Jacksonville, as a $4.1 million cut in state promotional funding went into effect.

Shelley Rossetter, the department’s assistant director of global marketing, said in an email Friday that stopping the flow of free juice “was hard to let go of.”

“The department and growers are very clear that our visitors miss their juice,” Rossetter said.

The free juice accounted for about $250,000 a year from the department’s promotional spending.

"The department and growers are very clear that our visitors miss their juice."

In its proposed $92.83 billion budget for the upcoming fiscal year, the Senate is seeking to restore promotional funding to $5 million, an amount annually offered prior to the current year.

Katie Betta, a spokeswoman for Senate President Bill Galvano, R-Bradenton, said in an email Friday that the department gave assurances to a Senate budget panel that if the $5 million is restored, it “would have sufficient resources overall to restore orange juice service at welcome centers.”

House leaders have long questioned some high-profile spending by Visit Florida and the correlation of state marketing and tourism numbers.

The Senate is seeking to spend $50 million on Visit Florida during the fiscal year that starts July 1, which would be the same amount as this year. The Senate also is expected next week to vote on a measure (SB 362) that would authorize Visit Florida to continue operating until 2028.

After a Visit Florida Board meeting last month in Tallahassee, agency President and CEO Dana Young noted that a casualty of shuttering the agency would be the welcome centers.

“It’s an unfortunate fact, but it is reality,” Young said.

Last year, operations of a welcome center along U.S. 231 in Jackson County was turned over from Visit Florida to eight Panhandle counties, as Visit Florida was hit with a 34 percent budget cut.