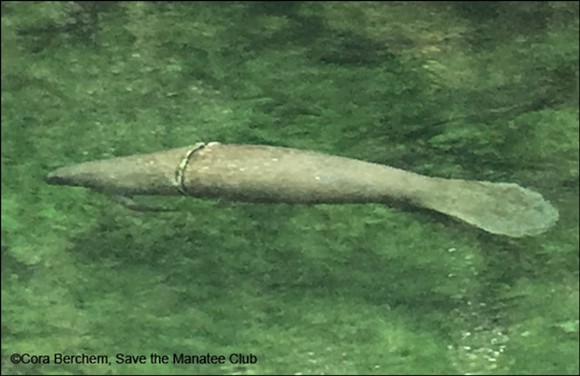 Photo via Cora Berchem/Save the Manatee Club
The manatee nicknamed Wheelie
A manatee with a bicycle tire wrapped around its belly was spotted again at Blue Spring State Park in Orange City.

According to WKMG, a camera captured an image of the manatee people have dubbed “Wheelie” on Thursday.

The garbage-entangled Sirenia was originally spotted last December, and all attempts to capture it with a net by the Florida Fish and Wildlife Conservation Commission, SeaWorld and the Save the Manatee Club in Volusia County have so far failed.

Officials believe the manatee got stuck in the tire as a calf, and it has since tightened around its body as it grew. Though the manatee does not appear to be ill, the tire could lead to infection and will most likely need to be surgically removed.

Officials believe the manatee got stuck in the tire as a calf, and it has since tightened around its body as it grew.

In the cooler winter months, thousands of manatees head inland to Florida’s natural springs, like Blue Spring, which provide a constant 78 degrees temperature. On Jan. 30, volunteers with Save the Manatee counted 421 manatees at the park.
Officials have been notified and are monitoring the manatee. To report an injured manatee in Florida, call 1-888-404-3922.