Enemy of the people 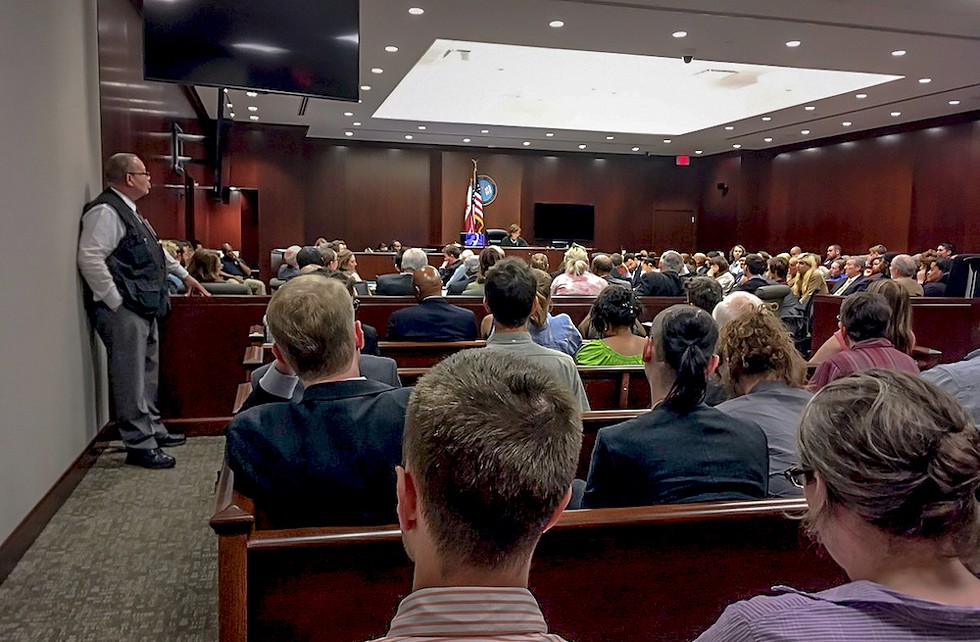 Photo by George Joseph
Dozens of J20 defendants and their supporters pack into D.C. Superior Court for a preliminary hearing on June 9, 2017.

All this reaching by the prosecutor's office turned out to be for naught. Although Assistant U.S. Attorney Rizwan Qureshi mumbled to an unbelieving D.C. jury at the second and only other trial of defendants that there had been a conspiracy to "destroy your city," this was never proven. That trial in May ended in acquittals and mistrials, after the first resulted in total acquittals last December. That pair of failures set the stage for the eventual collapse of the case in its entirety, letting the few dozen remaining defendants go free.

The second trial took place at the D.C. Superior Court where, in another room, a chief judge determined that Assistant U.S. Attorney Jennifer Kerkhoff had intentionally misled the court about the existence of nearly 70 videos recorded by Project Veritas operatives at protest-planning meetings ahead of the inauguration. The operatives handed over the surreptitiously recorded videos to a D.C. police detective, Greggory Pemberton, who would spend an entire year investigating the J20 case. Defense counsel later discovered personal tweets sent out by Pemberton indicating his sympathies with the racist pro-Trump digital underbelly, and used them to undermine his testimony at trial.

According to a recent filing from former defendants, the withheld videos "cut against the theory that the ... meeting was an exclusive, secretive meeting to plan unlawful conduct." The '60s-era stereotype of violent leftists whispering clandestine plans was part of the narrative prosecutors tried to create, and they went as far as lying in open court to preserve it.

This isn't the first time that authorities in D.C. have hunted for clues of a conspiracy post-riot. After the city's black residents rose up following the murder of Dr. Martin Luther King Jr. in April 1968, resulting in $27 million ($193.4 million today) in damages, the feds wanted to know who, if anybody, had orchestrated the chaos, and whether similar uprisings in more than 100 cities had been part of a revolutionary conspiracy to overthrow the white American system.

Stokely Carmichael, then the leader of the Student Nonviolent Coordinating Committee, emerged as a primary suspect. Shortly after King's murder, Carmichael told a radio host from Havana, Cuba, that it was "crystal clear [that] the United States of America must fall in order for humanity to live, and we are going to give our lives for that cause." But no conspiracy indictment was ever filed against Carmichael or anybody else. The fact that conspiracy charges were filed for so many in the J20 case after a mere $100,000 in damage illustrates how much prosecutorial aggression has advanced the last half-century.

Some in radical circles have called attention to the white privilege of the J20 defendants, arguing that by virtue of their whiteness (or, for the minority of nonwhite defendants, their proximity to that pool of privilege), defendants had access to platforms, sympathy, support networks and resources that most low-income and nonwhite defendants lack, and that these advantages were hugely responsible for our success. I mostly agree with this analysis.