The exact number of Florida teachers with guns remains under wraps 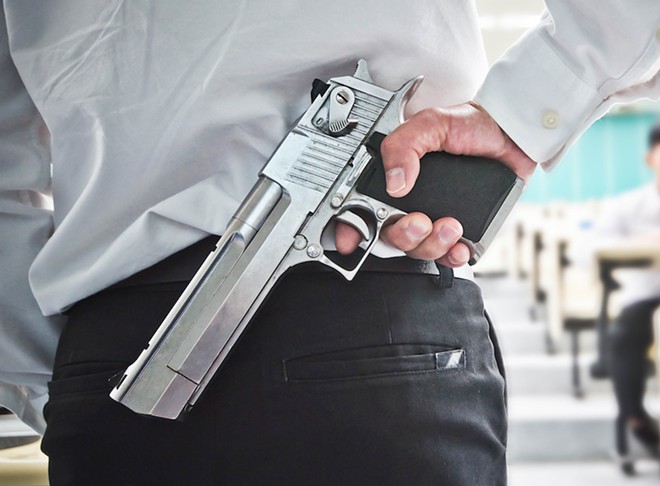 Photo via Adobe Stock
Republican lawmakers who pushed to allow teachers to carry guns in schools say they do not need to know how many Florida teachers are armed and participating in the so-called guardian program.

After weeks of emotional debate in the state Capitol this spring, the Republican-dominated Legislature and Gov. Ron DeSantis approved a bill that allowed teachers to get voluntary training and be armed to act as a first line of defense against school shootings.

Educators who solely performed classroom duties were initially excluded from the guardian program, which was created in response to the 2018 mass shooting at Marjory Stoneman Douglas High School in Broward County.

Republican lawmakers who backed expanding the program said this week they do not need to know the statewide number of classroom teachers who have signed up to carry weapons.

“I am not worried if they are a classroom teacher or not … in fact, I think the more anonymous the better,” Sen. Kelli Stargel, chairwoman of the Senate’s education budget-writing committee, told The News Service of Florida.

“Not having that number is not a bad thing.” – Hialeah Republican Sen. Manny Diaz Jr.

Stargel, R-Lakeland, said she doesn't know the number of teachers participating in the program and that it is not “something that concerns” her. The information should be confidential because it acts as a deterrent to school shooters, she added.

Sen. Manny Diaz Jr., a Hialeah Republican who chairs the Senate Education Committee, agreed. He said it is more important to know the number of school districts who have opted into the program, and not the “actual position” held by a school guardian.

“Not having that number is not a bad thing,” Diaz said.

But Sen. Janet Cruz, D-Tampa, said she thinks Republican leaders want to keep the number under wraps because it points to the controversial program’s “failure.” Many Democratic lawmakers fought the idea of allowing teachers to have guns in classrooms.

“Leadership wants to make sure that they don’t have to admit that this program is a failure,” Cruz said in an interview.

Senate President Bill Galvano, however, said senators do not need to know whether school security is offered by teachers if schools meet a mandate to have armed security at all times.

Public schools – including charter schools – have the option to hire school resource officers, employ law enforcement officers or use school guardians or security guards to meet the mandate. The guardian program is the cheapest option.

The Florida Department of Education’s website said 38 of Florida’s 67 school districts participate in the guardian program. But not all of them want to arm classroom teachers. Damien Kelly, director of the state’s Office of Safe Schools, told the Senate Education Committee in September that 11 districts were open to that idea.

Sen. Lori Berman, D-Lantana, said at the meeting it was hard to defend the expansion of the program without seeing its results. Kelly said he would provide the information to senators later.

“Leadership wants to make sure that they don’t have to admit that this program is a failure.” – Democratic Tampa Sen. Janet Cruz

Berman’s office told the News Service this week the education department followed up to answer her questions.

“However, we cannot disclose the details of that report as they are confidential and exempt from public record,” Berman legislative aide Daniel Delagrange said in an email Tuesday.

Cruz said the department also provided her office with the information, but she thought the details were “intentionally vague” and that the statewide number of teachers participating in the program was “not exactly” provided.

“It is disappointing that as a sitting senator someone has chosen not to share the information in detail,” Cruz said.

Officials with the education department told the News Service the statewide number of teachers participating in the program is confidential per a law that says “security and fire safety system plans” are exempt from public record.

“This information is confidential because it could reveal or identify the scope of the security plans of the district,” Cheryl Etters, a spokeswoman for the education department, said.

Barbara Petersen, an attorney with the First Amendment Foundation, said she does not believe the law applies when information is sought about the statewide number of teachers who are guardians. It would be different if the request was for details about individual schools or districts, she said. (Disclosure: The News Service of Florida is a member of the First Amendment Foundation.)

When the guardian program was created in 2018, the Legislature set aside $67 million for sheriff’s offices to train and arm guardians, and $16.1 million was spent. The unspent $52.3 million was rolled over to be spent in the current fiscal year.

DeSantis’ proposed budget for next year recommends funding the guardian program with whatever money is left from this year. The education department does not know how much money will be left over because the school year is still underway, Etters said.

Helen Ferre, a spokeswoman for the governor, said the guardian program is still a “new program” and his administration wants to offer time to “best accommodate school districts and sheriff offices” to participate in the program.

“The guardian funds are not sitting idle, applications continue to roll in and are being processed,” Ferre said.

Stay on top of Orlando news and views. Sign up for our weekly Headlines newsletter.
Scroll to read more Orlando Area News articles