The Center prepares for growth 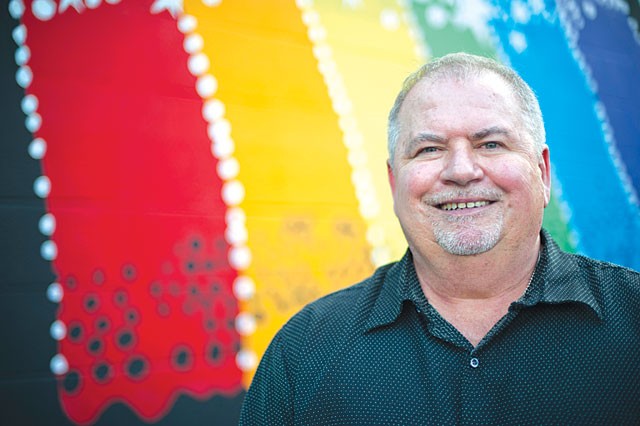 Just after midnight on Sept. 26, Randy Stephens, executive director of the Center, received an unexpected phone call from the Orlando Police Department. Three young men – aged 21 through 22, two of them University of Central Florida students – wandered out from a night of hopped-up bacchanalia at nearby Will's Pub, only to climb just past the odd art installation of two mannequin legs atop the LGBT community center's Mills Avenue location and onto its roof. The cops asked Stephens if he wanted to press charges – after all, the Center was vandalized with "Die fags" and "Go to hell" graffiti in 2009. Instead, Stephens decided to throw on some clothes and go down to assess the situation.

"It's not going to look very good if you have a police record that says you climbed on top of the gay community center," he says he told the kids before letting them off the hook. Stephens says they had no idea it was a gay center, especially considering that the building's sign was down.

"Not everything is a hate crime," Stephens laughs.

It may seem like a strange entry point to a story about the nearly 35-year-old Orlando institution that ranks as the oldest continuous LGBT community organization in the state of Florida, but it's a fitting one given the varying perceptions of the Center's place in Orlando. Since taking his post in 2010, Stephens has been banging the drums of inclusiveness and outreach, shuffling the Center's board of directors to bring a much-needed new dynamism to a place frequently associated with the gloom and doom of HIV testing and substance-abuse counseling. These days, Stephens says, the Center can't just be a place for "middle-aged gay men to hang out," but should be a place for everyone, including straight people. Naturally, that doesn't go over well with all of the old guard.

"I've caught abuse for that," he says. "That may have been the way of the world 10 years ago, but if we're asking people to be inclusive of us, we've got to offer them a seat at the table, too."

The Center came to its current location in the ViMi area in 2000 following a couple of storefront stints along Colonial Drive. At that time, Stephens says, the leadership wisely decided to financially diversify in order to keep itself afloat. In addition to the community center, the for-profit incorporated business arm of the organization took ownership of the retail spaces on both of its sides, the restaurant on its north side and the shop space on its south (now the Funky Monkey Vault). Stephens estimates that the combined property, which was worth nearly $1 million when it was purchased, is probably worth closer to $750,000 now. Regardless, a balloon payment of $340,000 is due next year, meaning that the Center is presently contending with just about every other nonprofit and political group for donations.

Stephens heads the nonprofit operations of the Center, which runs on a budget of "less than $130,000" annually, he says, an amount that includes his salary and some part-time salaries. The funding comes from a mix of donations, contributions from business members, some state funding and grants from national organizations. For the last two years, the Center has shared an annual $25,000 grant with Planned Parenthood of Greater Orlando from the Elton John AIDS Foundation in an effort to reduce HIV/AIDS among the youth population. Stephens says that the Center performed 3,494 HIV tests last year, with more than 1,000 people coming through the door monthly to attend various local business, social and therapy groups. In other words, it's come a long way from being the social group for college-educated men that it began as more than three decades ago. Today, women and transgendered residents factor more heavily into the Center's day-to-day operations, bringing with them a broadened focus evidenced in the updated design of the Center's main gallery room, its library and its cyber center.

In order to facilitate its growth and fiscal sustenance, the Center has rejuvenated its volunteer board with input from seasoned event planners, community leaders and tech-savvy new blood. According to Russell Walker, who joined the board two months ago and is now in charge of new board membership, the effect of the changes has been "massive."

"We actually have a full plan of attack here, not just some half-assed 'Let's just do this and see what happens,'" he says. "Because that's what's happened before."

That plan includes a proposed Kickstarter fundraising web page to address roofing problems; more social networking; and the Black and White Gala, an upscale fundraiser at The Abbey on Nov. 16. The goal: to raise the profile of a community service that's had many different profiles in the past, and to do so in a way that meets the needs of the times.

"It's not just a gay thing. We've gone beyond that," says Stephens. "We have one function and that's to serve the community."