The best decisions you can make in Orlando this year

New Year, new all of us 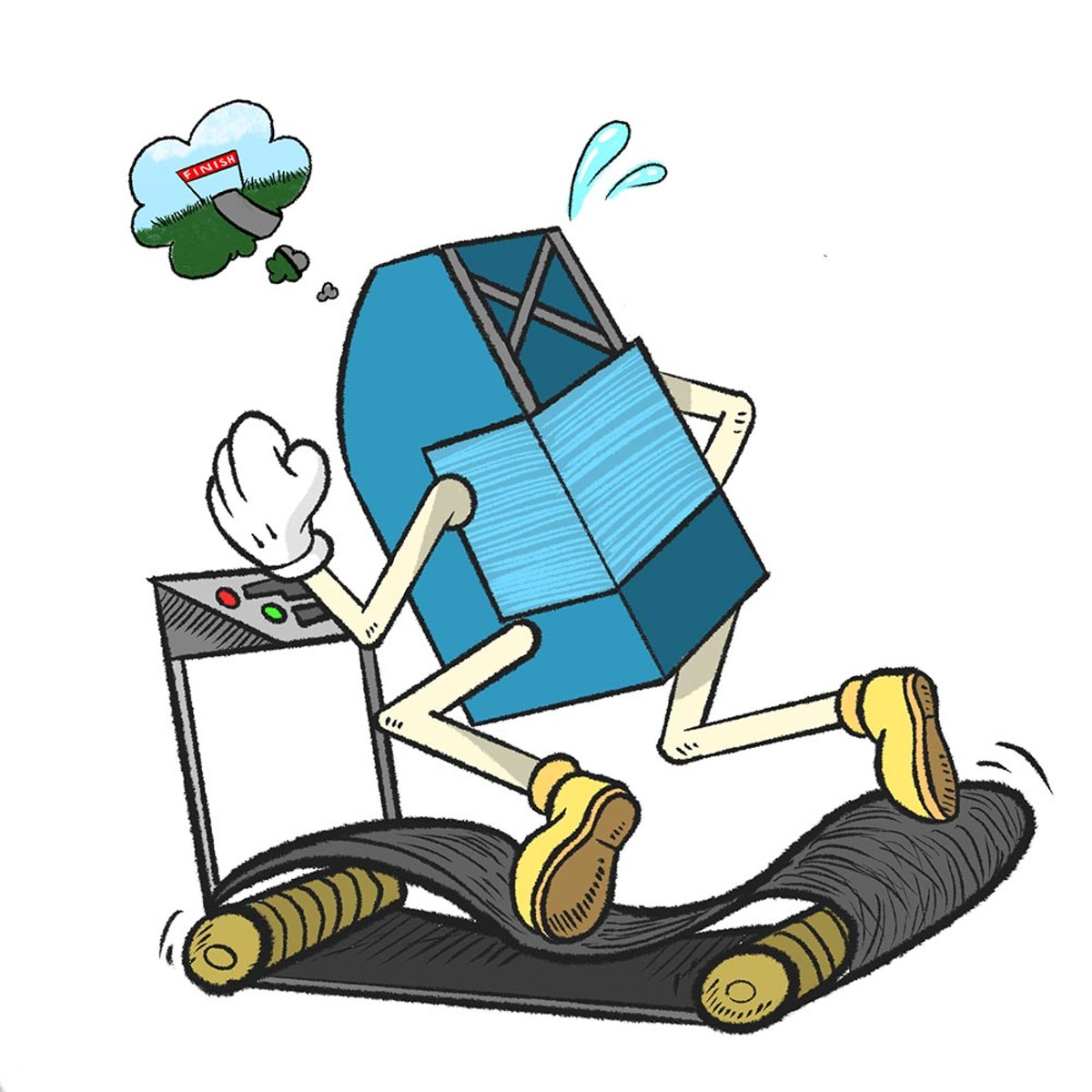 If your vote didn't matter, do you think out-of-touch politicians would be working this hard to take your freedom to vote away? Registering to vote and updating your voter registration address is a first and critical step to making our civic life better.

Don't you want to know how your elected officials are spending your tax dollars? Learn who they are, what they stand for, and how you can be part of the process. Follow them on social media, reach out to their offices, and attend a meeting. They are here to serve you.

Find a local cause you care about and volunteer

If you're not sure where, check out Florida Rising (@flrising), Second Harvest Food Bank of Central Florida (@feedhopenow), People Power (@peoplepowerfla) or the Bros in Convo Initiative (@brosinconvo) on Instagram for suggestions.

Pause Netflix for a trip to Enzian Theater, central Florida's independent single-screen cinema and home to the Florida Film Festival. Visit Eden Bar for a cocktail before enjoying independent and foreign films on the big screen, or show your support by becoming a member. Don't forget Freaky Fridays for late-night underground and experimental film screenings.

Learn more about what you're drinking and broaden your horizons. Wine sellers at Golden Hour, Eola General, Digress Wine are among the best in town at demystifying and de-snobbing the experience of choosing a wine based on more than its price.

And speaking of coffee ... put your bucks in some local stars' pockets instead of a multinational corporation. Whatever your caffeinated preference, there's a local coffee joint that can fulfill it. Need a drive-thru? Foxtail and Drunken Monkey have you covered. Single-origin bean snob? Shop the shelves at Easy Luck. Want those beans locally roasted? Coterie Coffee and Lineage Coffee Roasting can set you up. Need a new twist? Try the always-creative seasonal menus at Deeply Coffee or Craft & Common, or savor the surprisingly tasty Vietnamese egg coffee at Gà Ta. And we haven't even scratched the surface of Orlando's teahouses ...

Stock up on new music

Get physical and buy some new tunes on vinyl, CD or cassette. Up there with Park Ave CDs, East West Records and Rock n Roll Heaven as venerable local record stores that are still around (and even thriving) during the digital-music tsunami, Re-Runz recently relocated to a new spot at 6325 N. Orange Blossom Trail. Give them a housewarming gift of your dollars after you scour overflowing racks of the best hip-hop, soul, R&B and more in all formats, stretching from the 1960s to the present.

Protest is not only our fundamental right; it's a critical tool to securing the American dream for all. Orlando knows how to take to the streets demanding change and demonstrating solidarity. From marching alongside workers on the picket line to standing shoulder-to-shoulder with Iranian women to protecting LGBTQ+ kids and demands for racial justice, you'll find opportunities to attend throughout the year.

Abortion is a decision that should be made between a patient and their family and doctors, not politicians. Unfortunately, Gov. Ron DeSantis and conservative state lawmakers want to pass even more extreme abortion bans than Florida's current 15-week limit. Abortion bans disproportionately impact working-class people and people of color, and funds like Florida Access Network help close the financial and logistical gap.

Marking 50 years since the landmark Roe v. Wade decision, join Florida Rep. Anna V. Eskamani and reproductive rights storytellers at the March for Reproductive Rights, an expert-led rally followed by a march in Orlando, while thousands of others hit the streets in their cities, unified in the demand to make abortion legal and accessible. It's happening at City Hall on Sunday, Jan. 22, at noon.

Get a library card

We hope you're sensing a theme here. Knowledge is power, and for centuries libraries have served as a hub of information and the exchange of ideas. Our Orange County library system offers not only books (of the physical, e- and audio- varieties), but movies, magazines, comics, classes, events and meeting spaces — often for free, sometimes for a nominal fee.

Defend the freedom to read

So you've got your library card. Are you ready to fight for it? Parents across the state are organizing and rising up against the far-right assault on public education and information. One of the most active groups on the frontlines is right here in Central Florida: The Florida Freedom to Read Project connects parent organizations across the state of Florida and defends students' right to access information while at school.

We ain't gonna sugarcoat this. There is a concentrated assault on the free press happening, and the victims of dis-and misinformation are all around you. Support local papers with your readership and, if you can afford it, your money.

Touch some grass and kick some balls during OUT Sports League's (outsportsleague.com) winter season. Or if you want to go a little farther off the beaten path, coat your body in sunscreen and explore our local natural wonders, like manatee-friendly Blue Springs, Budweiser-friendly Wekiva Springs or hiker-happy Orlando Wetlands. Or enjoy the simple pleasure of a bike ride: Cruise around town on the Orlando Urban Trail or join a Critical Mass ride on the First Friday of every month. Make sure to wear your helmet.

But here's a tip: Don't swim in Lake Eola

You'll get ringworm or worse, an amoebic infection. (Naegleria fowleri is no joke, and it has been found in some local lakes.) Besides, you'll annoy the swans.

Go to a live NXT taping

Though spots are coveted — follow NXT on social media to find out the details on snagging your seat; it might take a few tries — you can't beat the price: free. Every week, a crowd of a few hundred cheers on the stars of tomorrow at a television taping of WWE's NXT developmental league at the WWE Performance Center. We're particularly fond of glammy heel tag-team Pretty Deadly, as of this writing. Yes boy!

Check out some new nightlife destinations

Venture outside the downtown core to support Orlando artists and touring acts at freshly christened independent venues like Conduit (@conduit_fl) and Soundbar at Level 13 (@soundbar.orl). Variety is the spice of life!

Honor them with action

Never forget Pulse nightclub and the 49 precious lives lost to a man armed with an assault weapon on June 12, 2016. As the LGBTQ+ community faces attacks from far right politicians, commit (or recommit) to creating a community that welcomes all. Honor the victims by investing in and supporting LGBTQ+ initiatives and businesses.

For over 10 years, the Pride Chamber has held its January Business Connect networking event highlighting the work of LGBTQ+ nonprofits in the community. It's a great event with wonderful food, a cash bar and a fun environment. Learn about volunteering opportunities and other ways to get involved with Central Florida's incredible nonprofits. It's happening TODAY, Jan. 11. (thepridechamber.org)

The Renaissance Theatre Co. is a great place to start. Try Musical Mondays (like a piano bar, but with better sheet music), Black Haus Creature Feature drag shows or one of their original, sometimes interactive shows (Nosferatu, Lennox Ave.). The open-air and indoor Candlelight Orchestra Tributes are affordable and entertaining classical pops concerts covering artists ranging from Hans Zimmer to Beyoncé (candlelightexperience.com). Check out some bleeding-edge theater at the new Fringe ArtSpace — like this week's Fringe Winter Mini-Fest (see page 15) — or if you want to veer wayyyyy off the beaten sonic path, house venue the Dining Room regularly presents challenging jazz and experimental performers in an informal and way-intimate setting (@atthediningroom).

There are great one-stops for local food and local vendors all over the city, but they've gotten notably better curated in recent years. At local brick-and-mortar mainstays like Clemons Produce, Freshfields Farm, Lake Meadow Naturals and Fancy Fruit and Produce, you'll find choices and community connections way beyond big-box boredom.

Get tested for STDs

Support housing for all

Housing is essential. Orange County voters made history last year as the first county in the state's history to get rent control on the ballot, and pass it. (Unfortunately, the state stepped in and squashed it.) Locally, grass-roots groups like the Orlando Tenants Power and Florida Rising are leading the fight, and you can take part.

Forward this article to five friends

Every friend group needs that friend. You know the one: the friend who organizes the election day carpool, gets everyone making signs for the protest, volunteers regularly and believes in the power of community. If you've read this far along, that's you, babe. Forward this article to five of your friends and ask them to do the same. Keep building together toward something that serves us all.

For the love of all that is holy, don't try to turn left going north on Mills at Colonial

Though, admittedly, honking at the fools who attempt this is the one thing that unites all Orlandoans.