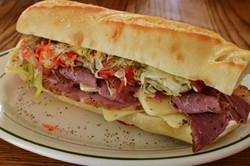 What can you do with less than two-and-a-half minutes?

Or, if you're from Florida, you can have sex. According to a study by the app Spreadsheets, which uses information about your sexual activities using your phone – seriously, when you're about to have sex, you turn on your phone, then open the app, which uses your phone's microphone and accelerometer to measure things like moans, calories burned and duration – Floridians only last on average 2:29 minutes between the sheets. Or on top of the sheets or in the kitchen. We're not judging! Even more creepy? When you have sex while using this app, you can earn achievements, like "data virgin" or "Hello Sunshine!" The app estimates that the average person burns between 150 - 200 calories per half-hour of sex. So, if you're having Florida sex? You'd only burn about 16.65 calories. And that's being generous.

Out of the 51 states (plus District of Columbia) ranked, Florida ranks 34, besting number 51, Alaska, by over a full minute. On the other end of the spectrum, there's New Mexico, where people average 7:01 minutes – almost five minutes longer than Florida. Now, according to the app, foreplay doesn't count in these numbers. One has to wonder, how does the app decide what's considered foreplay and what's considered sex? Does it listen for thrusting?

If you need me, I'll be in New Mexico ... without a creepy sex app.