The agony of the ecstacy

Orlando police swarmed The Club at Firestone on Orange Avenue. Capt. Ronald Rauth turned up the lights and switched off the music, and as TV news cameras rolled, he told the crowd to stand still while police arrested the drug dealers among them.

What happened next was predictable. "I got a thunderous response from the crowd," says Rauth, "of ‘Fuck you.'"

It would have been unrealistic for him to expect cheers. But expectations -- what is reasonable, what is good faith -- are the fulcrum of this latest downtown battle.

On the one hand it seems clear that city officials want The Club and its owner, Jan Harrold, to fade away or at least transform into something more befitting Mayor Hood's sensible-shoes ideal. Last week's three drug busts -- two on warrants for previous buys, one for a drug purchase made just before the raid -- put The Club into the red zone triggering the nuisance abatement ordinance, which could result in the city seizing the property or, more likely, the Bridgestone/ Firestone corporation evicting the club. On the other hand, hey, it's just business, says Rauth: "It's part of an effort to arrest drug dealers. Our focus has never been to close the club, nor should it be."

Meanwhile, Harrold continues to flit between defiance and legal hair-splitting in defense of his club. He says the nuisance ordinance cannot reach him because he has an option to buy the property, which he is exercising in conjunction with a lease that forbids the Bridgestone/Firestone company to evict him unless he or one of his managers is involved in illegal activities on the property, Harrold says: "Has anyone accused me or my employees of illegal activities? No."

(Rauth acknowledges that, but refers to a March 7 burglary arrest of a man who he says is assistant manager at Firestone. Police found three pills on the man, Rauth says, and while it didn't happen at the club, "it's just more smoke coming from the gun.")

Moreover, Harrold insists Mayor Hood has apologized to him and that Police Chief Jerry Demmings has launched an investigation of Rauth. Both claims are untrue, say police and Jim DeSimone, Hood's spokesman: "The mayor told him we're quite happy to have him talk to the police chief, city staff and anyone else. The city is resolute in combating organized drug activity downtown. If he wants to help, fine. Essentially she said actions speak louder than words."

Last month Rauth sent Harrold a 14-point list of recommendations to eliminate drug activity ["Sweeping out The Club," March 4]. "I did everything he asked me to do," Harrold says. "I am in the process of remodeling the club. Totally upgrading." There will be a new dance floor, new patio, brighter lighting and several other improvements to bring a more upscale clientele. But the music will stay the same.

Rauth says Harrold has been selective in his changes. Rauth's first suggestion, for example, was "Stop catering to the ‘Rave' clientele." Harrold has long maintained that his is not a rave club, despite its reputation. Harrold did crack down on backpacks, blow-pops and inhalers, Rauth says, but would not ban glow sticks, institute "pat-down" searches of patrons, or close the chill rooms or the patio.

What is undisputed is this: Undercover OPD and Orange County sheriff's agents made 34 drug buys inside The Club, from 24 different people, in recent months. The raid was meant to capture these people. Rauth says 24 is a lot of drug dealers. Harrold says it's a miniscule percentage of the "64,000" people who have visited his club so far this year.

What really upset Harrold was the release, by Rauth, of state Division of Alcoholic Beverages and Tobacco documents detailing an investigation into a Miami club Harrold ran in the late 1980s and early '90s. Harrold lost his liquor license because undercover investigators found drugs and drug dealers in the club; Harrold notes the law has changed since then, requiring direct involvement or overt tolerance of the dealing. His original 10-year license forfeiture was reduced to five years.

Rauth says he sees parallels with a drug bust at a club in Jacksonville last Saturday. "The operator of that club was applauding police efforts...," he says. "[T]he stark contrast obviously struck me."

But there may be closer parallels to the New York case of Peter Gatien, owner of Limelight and The Tunnel. Gatien was arrested and charged in 1996 with numerous drug offenses, conspiracy and racketeering. The case boiled down to the accusation that Gatien attracted business to his clubs by tolerating drug use and sales -- that he profited indirectly by creating a haven for the rave counter-culture.

Like Harrold, Gatien argued that his security force did all it could to solve the problem. A jury agreed.

For Harrold, enough is enough. "We're supposed to be doing this operation together," he says. "Up until two weeks ago we were all on the same page. We busted undercover officers in here -- our security -- for trying to buy drugs."

On Tuesday Harrold said he met with city administrator Richard Levy and city attorney Scott Gabrielson to work out their differences. "The city has kind of changed their tune," Harrold said afterwards. "Everything is fine." Gabrielson and Levy could not be reached for comment at press time. 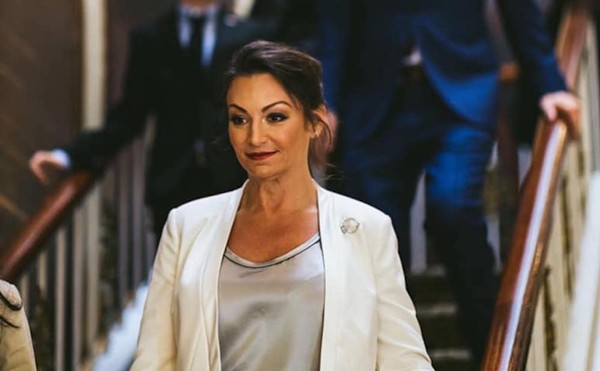