Mary O'Connor was caught on bodycam using her badge to avoid a traffic citation. 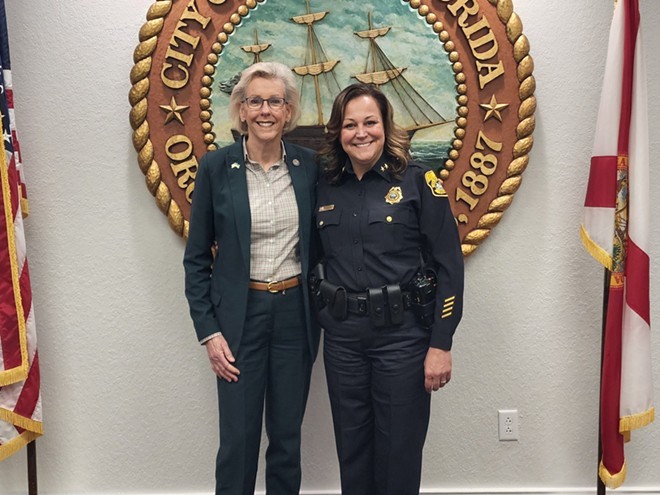 Photo via Tampa PD/Twitter
Mayor Jane Castor with Mary O'Connor on May 17, the day she was confirmed as the new chief.

Tampa Police Chief Mary O’Connor has resigned after less than a year on the job.

O’Connor submitted her resignation less than a week after public records requests by Creative Loafing Tampa Bay unearthed body cam video showing her flashing her badge to get out of a traffic violation on a golf cart.


A press release says Tampa Mayor Jane Castor — who appointed O’Connor just nine months ago despite a contentious search and pushback from the community — requested and accepted O’Connor’s resignation.

Assistant Chief Lee Bercaw, a 25-year veteran of the department, will serve as acting chief while a comprehensive national search is conducted.

Last week, Castor announced that O’Connor would be put on administrative leave, while an internal investigation was launched into the golf cart incident on Nov. 12. The release added that the investigation conducted in part by Captain Patrick Messmer has concluded.

O'Connor and her husband Keith were pulled over in Oldsmar by a Pinellas County Sheriff’s Office deputy for operating a golf cart on a public road without a license plate. In the video, O’Connor can be seen flashing her TPD badge and telling Pinellas County Sheriff Deputy Larry Jacoby that she is the police chief in Tampa. She then asks if he is recording the stop and says, "I'm really hoping that you'll just let us go tonight."

After receiving her business card and thanking each other for their service, Deputy Jacoby let the couple go.

Mayor Castor — who is running for re-election in March — said in the press release that TPD has a code of conduct that includes high standards for ethical and professional behavior that apply to every member of our police force.

"As the Chief of Police, you are not only to abide by and enforce those standards but to also lead by example. That clearly did not happen in this case," Castor said. "It is unacceptable for any public employee, and especially the city's top law enforcement leader, to ask for special treatment because of their position. Public trust in Tampa's police department is paramount to our success as a city and community."

O’Connor was confirmed as chief last May in a 4–2 vote by City Council, with the two No votes coming from councilmen Bill Carlson and Orlando Gudes.

Her confirmation followed heavy criticism regarding the lack of transparency by the mayor in the selection process and concerns over a 1995 incident in which O’Connor assaulted a Hillsborough County Sheriff’s deputy during a DUI stop.

During the incident, O’Connor, who at the time was an officer with TPD, was riding in the passenger seat of a car when her then-fiancé (now husband) was pulled over on suspicion of DUI by a Hillsborough County Sheriff deputy. Keith — at the wheel again during this latest incident — was charged with drunk driving, and deputies claimed O'Connor kicked the windows and punched a deputy when she was put in the back seat of a patrol car.

The future police chief was charged with assault on an officer, obstruction and disorderly intoxication.

"This is especially disappointing because I gave Mary O’Connor a second chance, as I believe in second chances for people," Castor continued in the release. "Which is one of the reasons that the disappointment today runs so deep. I had high hope for Chief O’Connor, as she was off to such a strong start by reducing violent gun crime, proactively engaging with our community and focusing on officer wellness. But these accomplishments pale in comparison to the priority I place on integrity.”

The disposition letter from the TPD Professional Standards Bureau investigation says that O’Connor compromised her and the city’s professionalism and ethics, adding that the evidence found the chief in violation of TPD policies.

The findings show that O’Connor called Castor to make the mayor aware of the incident on Nov. 30 — that’s 18 days after the traffic stop and over a week after Creative Loafing first submitted a public records request for the video. It was also the same day that CL was informed by PCSO that the public records team was preparing the video for release the next day. Castor did not see the video until Dec. 1, the same day the bodycam footage was released to CL.

The investigation does not say what compelled O’Connor to tell Castor about the incident. It also does not say if or how O’Connor was made aware that the video, but in a lengthy email to TPD sent around the same time the video was released to CL, the chief told officers, “I want you to hear it from me first prior to news stories circulating."

In her resignation letter, O'Connor said that she became the chief "against all odds," adding that she promised to serve the community she loves to the best of her abilities. "I feel like I've done just that," she wrote.

She listed off some of her accomplishments, like taking over the community forums started by her predecessor, Butch Delgado, who was acting chief following the retirement of Brian Dugan. She also touted her own efforts to focus on the wellness of officers through the chaplaincy program and the introduction of a therapy dog.

"I would never want my personal mistake to stand in the way of the progress I have made in mending relationships between the police department and the community, so for that reason, I am resigning," O'Connor added. "I plan to use this time to reflect and spend time with my family and children before moving on to any future endeavors."

This is a developing story at Creative Loafing Tampa. Keep an eye on their site for updates as they happen.