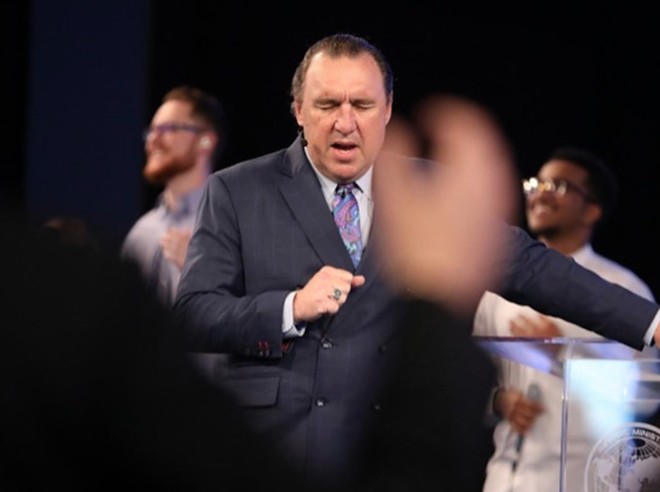 Photo Rodney Howard-Browne/Instagram
Rodney Howard-Browne — a conservative preacher, peddler of absolute insane conspiracy theories, and an evangelical leader who prayed over Trump in the Oval Office — claims that he cleansed Florida of Zika and says he now plans to do the same with the coronavirus.

In a video first noticed by Right Wing Watch, Howard-Browne says that he “cursed” Zika in the name of Jesus, and this is something he has the power to do in regards to the coronavirus, but just for Florida and nowhere else on Earth.

“We are doing the same thing with the coronavirus,” says Howard-Browne.” We do not need it on these shores, and somebody said ‘Well, what about the rest of the world?’ I mean, I can’t be responsible for every city, or whatever.”

Right-wing pastor Rodney Howard-Browne cleansed Florida of the Zika Virus and now intends to do the same for the coronavirus ... but only for America because obviously he can't be responsible for the entire world. pic.twitter.com/unlu3y0lkq
— Right Wing Watch (@RightWingWatch) February 26, 2020

The video was first posted to the pastor’s Periscope account on Feb. 24.

This isn’t the first time Howard-Brown, who says his congregation at The River Tampa Bay Church is “supernatural,” has claimed to have saved mankind. At a revival event in Washington D.C. in July of 2018, Howard-Brown said he “saved” America by issuing a “restraining order on the Antichrist.”

He also made headlines in 2017 when he posted signs at his church saying the congregation is heavily-armed.

But Howard-Brown is also known for saying things like the Vegas shooting of 2017 that killed 58 people was a false flag operation, chemtrails and weather manipulation are real, and the people that rule the planet are Satanists who perform human sacrifices and drink blood.