SUNDAY NYT REPORT: Full Sail, Sunk. It's not an Italian cruise ship, but... 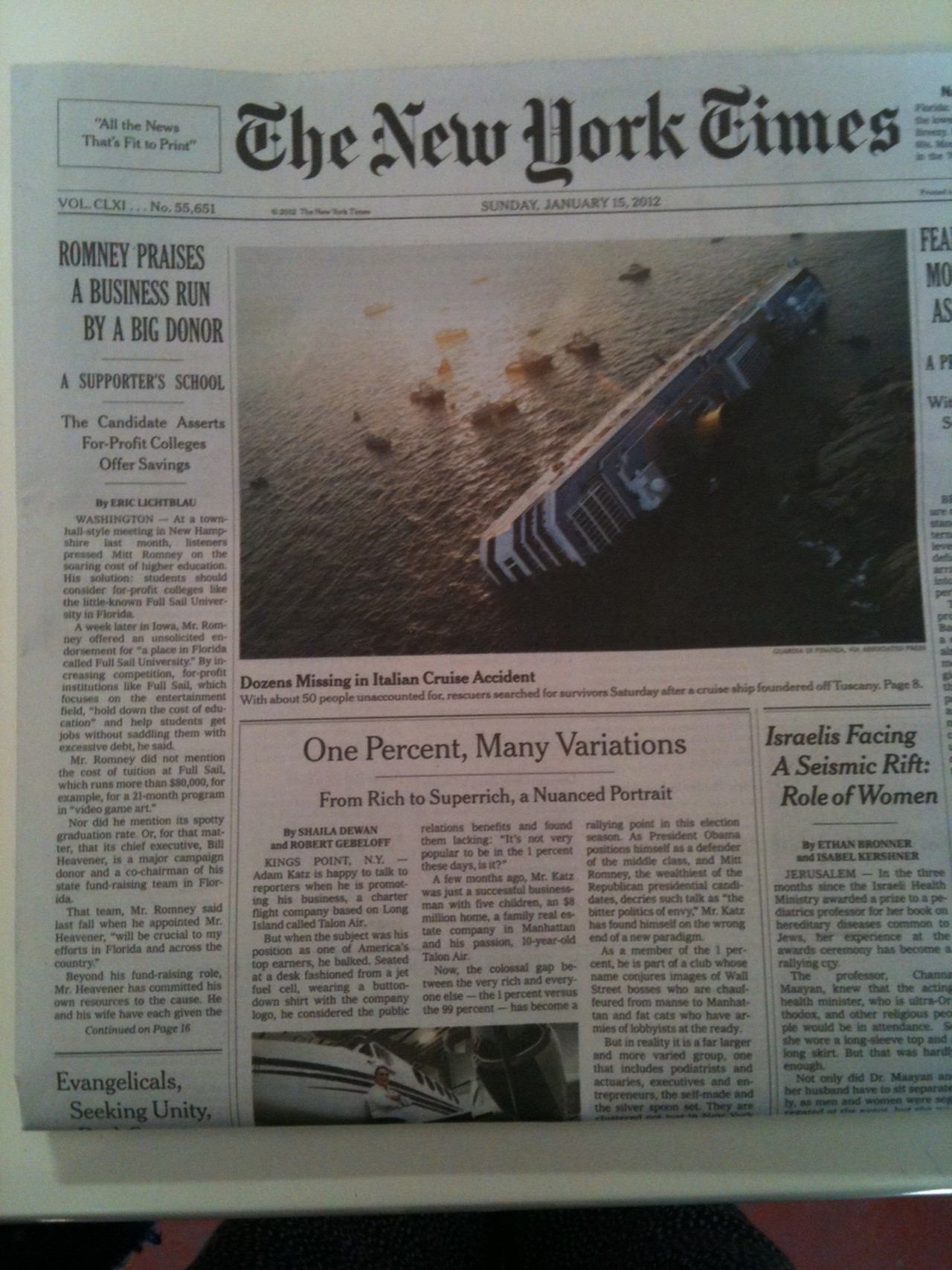 Hey, look! You see that sideways picture of cruise ship on its side up there? Well, that's probably just about how the folks at Full Sail feel this morning after picking up their Sunday Times. If you look to the left side of the page (or bottom, in this case ... or the link we just posted), you'll see a fairly scathing story called "Mitt Romney praises a business run by a big donor." Not much news there, right? He ties dogs to the top of his car, so what could possibly go wrong? Well, howzabout this?

The $81,000 video game art program, for instance, graduated just 14 percent of its 272 students on time and only 38 percent at all, while the students carried a median debt load of nearly $59,000 in federal and private loans in 2008, according to data that the federal Education Department now requires for-profit colleges to disclose in response to criticism of their academic records.

The story basically puts Romney's ties to Full Sail chief executive Bill Heavener, who has in the past been a supporter of some Democratic candidates, into question. The guy is money with shoes on it (well, both of them are). But given the New Republican push to privatize everything in avoidance of pesky regulation, especially education, this is a bit of a bombshell. Also, Orlando is front page news again! Heavener wasn't available for comment in the story, obviously, but the quotes from the YOUNG PEOPLE who are (or whose parents are) responsible for paying ridiculous amounts of money for private colleges specializing in dude-dom are noteworthy.

At Mr. Romney’s town-hall-style appearance in New Hampshire last month, Kallie Durkit, a junior at Bowling Green State University in Ohio, pressed the candidate on his views on college tuition. She said she was troubled by his suggestion that students look to Full Sail University and for-profit colleges in general as an affordable alternative to traditional schools.

“When he said that, I was just like, ‘You’re kidding,’ ” Ms. Durkit, 21, who described herself as an independent, said in an interview.

After the encounter, she looked up Full Sail’s tuition rate — $40,000 a year for some programs. She said Mr. Romney’s claims about the school’s affordability reinforced her impression that he was out of touch with the realities students face.

When told that Full Sail’s chief executive was a Romney fund-raiser, Ms. Durkit laughed, saying she wished she had known that during her exchange with the candidate.

“I guess it just goes to show that money impresses people,” she said.

So do sinking ships.