A goodbye from our departing film and music editor 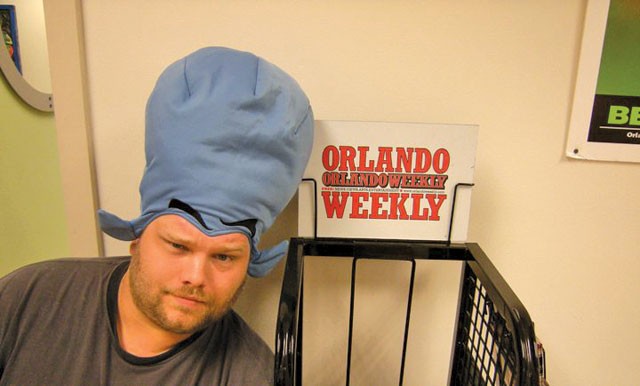 Justin Strout during a poignant moment

Five years ago, I worked at a FedEx call center fielding complaints about late fees. What very few of the folks I sat beside knew about me is that I was also moonlighting as a music writer for hip-hop magazines and blogs. A couple years prior, then-Orlando Weekly editor Jason Ferguson had told me I was "raw but promising," and helped develop my writing as a freelancer. Five years ago, he offered me his job. My life hasn't been the same ever since.

At the time of the offer, he'd been filling the music/film editor chair for five years. Now, after my own five years of getting to know the Orlando music and film scene for what it truly is – a binding community of diverse, yet equally celebratory talent – I feel I've reached my term limit. I'm married now, with two kids. Where does one go from here? For me, it's moving toward creating art rather than critiquing it. To that end, and with the support of my family both at home and at OW, I'm leaving my post to pursue an entirely different kind of writing career, taking inspiration from the countless musicians, rappers, bands, filmmakers, screenwriters and craftsmen I've had the pleasure of covering in these pages.

To the Orlando Weekly's monumental credit, they've embraced my decision, transforming the creative energy they surrounded me with for so long into a springboard. I can never give enough thanks to the Weekly crew, past, present and near-future, freelancers, friends and the city in general who have shaped my imaginative and professional worldview. I will never forget you, and I can never repay you. (I might owe Bao Le-Huu, who will return to this space next week, my firstborn son, but we're checking legalities.)

Now, a new era begins for the position I inherited. Although a focus on local music remains the goal, my successor will hold the new title of Associate Editor and will further define, reflect back and take part in the scene that's been such a joy in my life all these years. I don't know what the future looks like, but I think it will be a fruitful one for the City Beautiful.

Writing headlines isn't easy, but Justin made it fun.
Here's a list of OW staff favorites from his tenure.