Seminole not out of woods yet 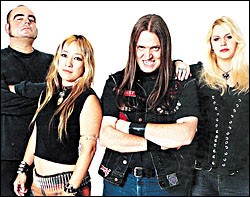 FIREBALL MINISTRY Oh, how we hate ourselves for loving Fireball Ministry. We know they must be some sort of Frankenstein-metal band, crafted out of the best bits of the last 30 years of heavy music. Ozzy-like vocals, Priest-like riffs, Slayer-like drums … mmmm, we're getting hot just thinking about it. But, oh, the shame. We know other people love 'em, and they're getting videos played and stuff, but we really don't want to be the ones left holding the bag when it turns out that FM was just some huge experiment in mind control. So, we'll have to suffice with a public service announcement: Stay away from this show. We know you're tempted by the awesome power of Fireball Ministry, a truly impressive band with one of the most "fuck you, we're metal" looks ever and the sound to back it up. Don't be. It's all a trap. Men with black suits will be there to do bad things to you. (with Dio, Anthrax; 8 p.m. at House of Blues, 407-934-2583; $25-$55) 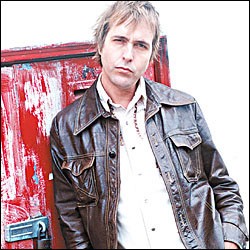 CHUCK PROPHET Overseas, Chuck Prophet reportedly enjoys gobs of notoriety. In fact, he's lauded as something of an alt-country Clapton over there. And well he should be – his deft guitar work and austere melodies evoke an enunciating Bob Dylan or a lucid Lucero. On his newest record (Age of Miracles), Prophet pushes the envelope of his Americana labeling by incorporating less-than-authentic beats and loops into time-tested roots-rock structures. But what's missing from his compositions – and what causes stateside audiences to balk at buying into Prophet – is drama. In his songs, Prophet eschews denouement in favor of stringing subtle finales together in a cynical singer/songwriter way. And to Americans, that usually translates to boring. But that's not to say Prophet isn't quality; rather, it's just another example of how impatient Americans are. (with Kingsbury; 8 p.m. at Will's Pub, 407-898-5070; $7)

INDIGENOUS FESTIVAL Thanks to the hurricanes, the Indigenous Festival we wrote about a month or so ago (Selections, Sept. 2) was rescheduled as the finale for UCF's 12th annual Diversity Week (www.diversity.ucf.edu). Organized by Tony Coolidge of Atayal (www.atayal.org, "the worldwide voice of the indigenous tribes of Taiwan"), this free event is intended to be both entertaining and productive; many of the indigenous tribe members are here for networking, including a hopeful field trip to the Seminole reservation by the Taiwanese contingent. But Coolidge does say that the 10 a.m. opening ceremony will be particularly spectacular, with a parade of cultures' native dress, music and other cultural splashes from Taiwanese, Africans and Native Americans. After that, there will be film screenings and performances of dance and music by special guests throughout the three levels of the Student Union. (10 a.m.-7 p.m. at Student Union, University of Central Florida; www.indigenousfestival.org; free) 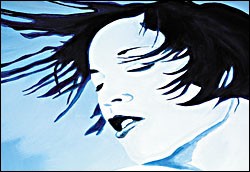 MADONNA IN ART So artist Holly Picano found her lucky star – no wonder she wants to celebrate. (We couldn't help ourselves.) The new coffee-table art book Madonna in Art (192 pages, Chaucer Press) was compiled by material-girl junkie Mem Mehmet of England and sports four of Picano's poppy portraits that Mehmet spied on a tour of the local artist's website (www.hollypicano.com). In the book, first released in the U.K. and now making its stateside debut, Picano's visions join drawings, graphics and portraits by 115 other artists from a total of 23 countries for a 20-year overview of the mother of reinvention's myriad "looks." Picano, who studied at the Art Institute of Fort Lauderdale, says she's been painting faces for about three years and though not all the faces she paints are celebrities, she did contribute some pop divas to a collection at the Hard Rock Hotel. The Madonna vibe will hang over the book-signing event with videos and such, and Picano will unveil some all-new Esther-special originals not included in the book. (2 p.m.-6 p.m. at Urban Think Bookstore, 407-650-8004; free)

MOUSE ON MARS/JUNIOR BOYS/RATATAT This should be an interesting show, because this three-fer bill highlights well-defined and different points on a similar spectrum. The long-term fallout of the electronic/dance revolution of the late '80s and early '90s has been a willingness for indie artists – who, as a rule, shunned the polished synthesis "electronic music" implied – to explore the sonic palettes afforded by samples and sequences. Here, we've got one of the earliest (and most experimental) groups to present blips and bleeps in a way that Pavement fans could respond to, Mouse on Mars, who, despite being German, have always managed to invest a substantial amount of ethereal emotion into their music. Junior Boys, however, slather on the prettiness and sensitivity so thickly that it's hard to believe that anyone who owns a record with a guitar on it could like them. But, of course, the indie kids love 'em. Why? Because they sound like a cross between the Pet Shop Boys and Simply Red … two bands no cool kid would ever be caught dead listening to. This isn't to minimize the pleasure to be found in Junior Boys' tunes; to the contrary, Last Exit is a refreshing and forward-looking record, but one that just happens to sound totally gay. With New York's Ratatat on the bill, you'll notice the sonics coming full circle. Ridiculously catchy songs with guitar riffs piled high atop multiple layers of electro-goodness, Ratatat most closely resembles what most of us imagine when we think "indie band." Except, just like every other "band" on this bill, they're a duo. (8 p.m. at The Social, 407-246-1419; $12)

SECRET LIVES Among the many people around the world who suffer as a result of tyranny in its many incarnations, women and children, in particular, never fare well. The documentary Secret Lives: Hidden Children and Their Rescuers During World War II kicks off the Holocaust Memorial Resource and Education Center's annual film series, and is presented by the Holocaust Center as a complement to Her Story Must Be Told, a traveling exhibition from Cincinnati's Hebrew Union College-Jewish Institute of Religion. Her Story Must Be Told represents more than a dozen personal recollections – memories, stories and photos – by female survivors of the Holocaust. The center added its own touch to the exhibition, bringing together similar histories of local survivors to share the lingering impact on their lives and loved ones. Secret Lives further zeroes in, by telling the desperate stories of Jewish children hidden from the Germans by non-Jewish families. The film was produced and directed by Aviva Slesin, herself a hidden child who went on to win an Academy Award in 1987 for another documentary, The Ten Year Lunch, about Dorothy Parker and her free-thinking cohorts who frequented the Algonquin Hotel in 1920s New York. (film screening, 7 p.m. at the Holocaust Memorial Resource and Education Center of Central Florida, Maitland, 407-628-0555; exhibit continues through Dec. 17; both events are free)

ART CHANTRY Though a trip to Disney World is likely Art Chantry's main enticement to visit Orlando in hurricane season, the legendary graphic artist will have some interesting stuff to say at his AIGA-hosted lecture. Still rebellious, outspoken and prolific, Chantry now resides in St. Louis, away from Seattle and the grunge scene he helped to visually define with record sleeves and poster art. His history is rich and his art influential, but we wanted to know Chantry's takes on graphic arts and social/political advocacy in the here and now. "Basically," he says, "graphic arts have always been very much a part of the popular voice, and the political use has finally been recognized by the design elite as a viable source of exploration and recognition. Seems too little, too late to me. The visual graphic language of popular culture just keeps plowing ahead in spite of 'design culture's' scant approval." Coming from a speaker hosted by the American Institute of Graphic Arts, we're guessing that Chantry's still not afraid to take on the establishment … even the one that's paying for his Disney trip. (6:30 p.m. at Valencia Community College East Campus, Room 5-112; free to AIGA members and Valencia students; nonmembers $20, student nonmembers $10; RSVP via orlando.aiga.org)

LAW IN WARTIME Ever since Guantanamo Bay began rivaling Holiday Inn as America's busiest hostelry, the average U.S. citizen has heard the phrase "military tribunal" only slightly less often than his or her own name. But for all the media play that tribunals get as a concept, who can say what really goes on at one? Well, James Smith III can: A former military attorney turned professor at Florida Atlantic Metropolitan University, Smith will discuss the procedural ins and outs of tribunals in an educational session designed to enhance the knowledge of law students and laymen alike. Joining Smith will be Col. Wayne E. Dillingham of the U.S. Air Force, who assists military prosecutors in pursuing tribunal cases. While the focus of their lecture is showing how tribunals are convened and conducted, the legal and ethical ramifications of detention are bound to come up as well, say the event's organizers at FAMU. That integration of professional concerns and public interest has been a hallmark of the school's "Law in America" lecture series, which most recently presented a discussion of same-sex marriage. Now, if the school could find some experts willing to propound the importance of awarding civil unions to Gitmo detainees … let's just say we'd be lining up for that one. (6 p.m. at Orlando Public Library; 407-254-3265; free)