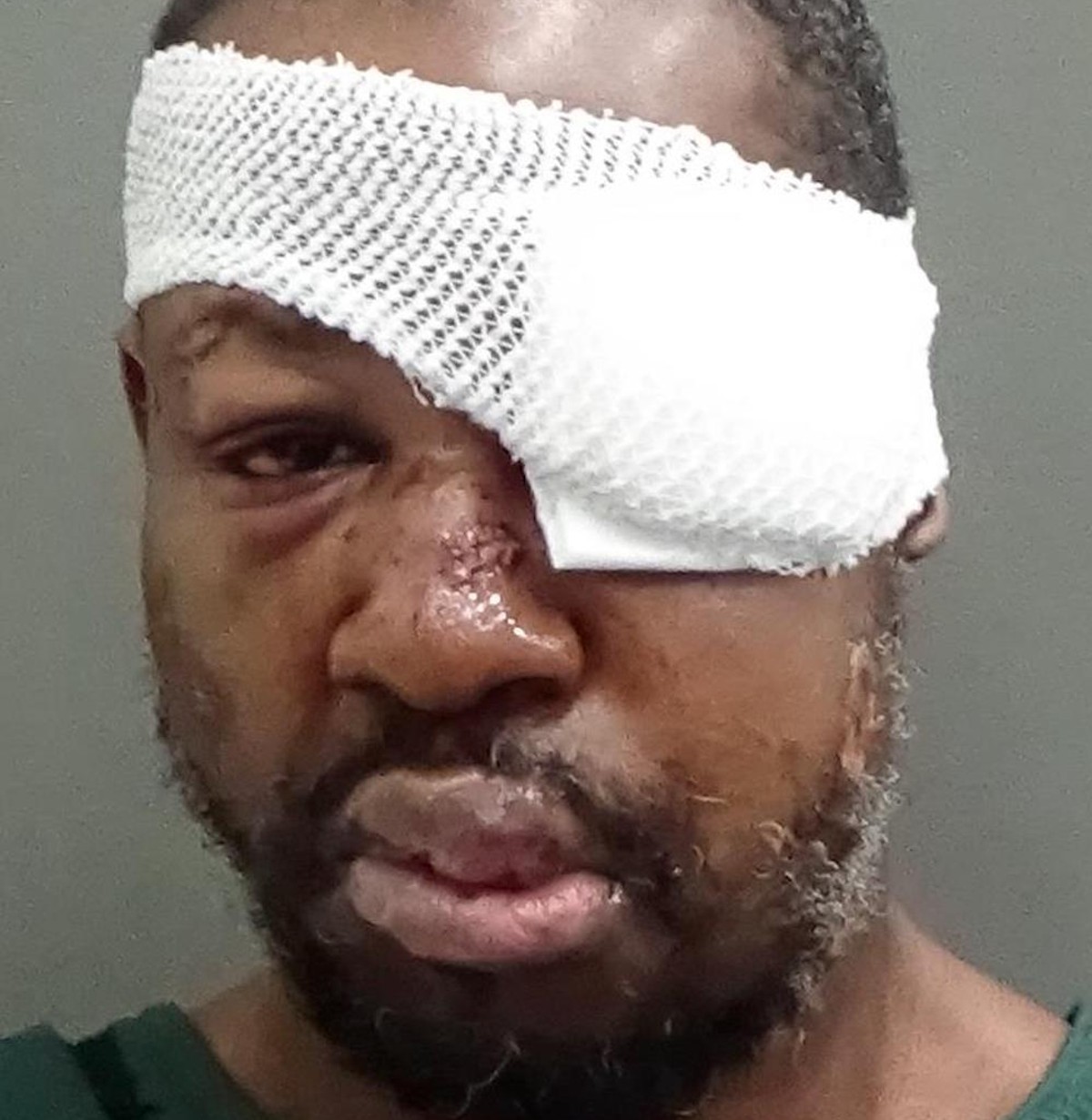 Markeith Loyd after his arrest Photo via Orlando Police Department

For nine tense days in January 2017, Orlando Police searched for double murder suspect Markeith Loyd, accused of killing a cop days earlier and killing his pregnant ex-girlfriend the month before. The reward for information leading to his capture steadily rose, from $60,000 to $100,000 to $125,000.

Police finally tracked him down. On Jan. 17, the night he surrendered himself, he was repeatedly kicked in the face as he lay on his stomach among police officers, according to a report from Seminole County State Attorney Phil Archer. Loyd lost his eye in the process.

Since that night, questions have arisen as to whether Orlando Police used excessive force when they took Loyd in. While one officer allegedly told Jeff Deal of WFTV 9 that Loyd "cowered and gave up like a little girl," the official police line is that he resisted.

Archer's report has determined that police did use deadly force when they took Loyd in.

But, the report says, it was justified.

That's thanks to the Stand Your Ground Law. The Seminole County state attorney cited it in his decision, asserting that officers "reasonably believed that their force was necessary to prevent Mr. Loyd from either killing or inflicting bodily injury upon them."

This justified fear, according to Archer's report, was based on the accumulation of Loyd's criminal history, his previous statements and his behavior the night of his arrest. But, at the risk of an oversimplification, it appears the report suggests that the swift kicks to the face Loyd received while lying on his stomach were mainly set off because he didn't heed commands to stop looking at the officers.

Going back to his criminal history: The arrest came at the end of a nine-day manhunt for Loyd, who is accused of killing his pregnant ex-girlfriend Sade Dixon on Dec. 13 and Orlando Police Lt. Debra Clayton on Jan. 9. (Clayton was posthumously promoted to Master Sergeant.)

Police say Loyd had an athletic build and showed enough "proficiency with firearms" to allegedly shoot Clayton with a concealed gun while running away from her, along with shooting the front wheel of an Orange County Sheriff's vehicle.

As for his previous statements, Archer's report says police thought that Loyd felt he "had nothing to lose" because Loyd had told others he wanted to "trigger a suicide by cop scenario," and had set his sights on being on "America's Most Wanted list."

That night in January, it appeared Loyd was turning himself in. He opened the front door, threw out a "dark piece of clothing" and then threw out what appeared to be two handguns, one at a time. He followed officers' instructions to get on the ground and crawl toward the officers. That's when officers' suspicions were aroused.

First problem: He kept his bulletproof vest on. That made officers believe Loyd still expected more action, the report stated.

Then there were some parts of his compliance that were suspicious to officers, according to the report.

Loyd crawled toward officers past the guns he dropped, making no effort to pick them up. But, the report flips that seemingly obedient action around: "This fact was understandably alarming in itself, because it gave officers pause to consider that if Mr. Loyd had not elected to retrieve one of the guns, perhaps that was because he was still armed and had not divested himself of all his weapons."

Next problem: his eyes. Loyd was looking all around as he crawled toward officers, which made them fear he was trying to come up with a "tactical advantage" over the crowd of law enforcement. As a group of four officers approached him, authorities told Loyd to look away, but he didn't.

"I recognize that Mr. Loyd was surrounded at the time of his apprehension, and an argument could be made that anywhere he looked, he would inevitably be looking in the direction of an officer, but this argument fails to take into consideration the one place Mr. Loyd could have looked: the ground. Doing so would have complied with the officers' commands, and it would have put his face in a position that it would have been protected by a kick or strike from the officers," Archer's report states.

"I wouldn't believe anything Markeith Loyd says," Mina said. "We are talking about a cold-blooded, ruthless killer who then took off and committed more crimes, attempted to kill a sheriff's deputy and also carjacked somebody."

Orlando Police does have a record of very high use of force, which even prompted Mina to ask officers across the department to minimize use of force in an April 2016 directive. (Use of force includes hitting, kicking, use of pepper spray or stun gun, or loosing of a police dog.) That directive was issued after an Orlando Sentinel investigation in fall 2016 found OPD had used force on 3,100 people, leading to 1,900 injuries between Jan. 1, 2010, and Dec. 31, 2014.