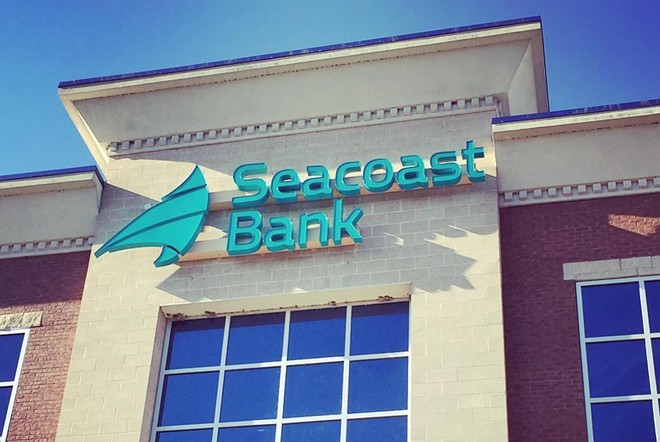 Photo via Seacoast Bank/Instagram
One Florida Bank is being sued by Seacoast Bank following the mass resignation of 12 commercial banking executives just hours after Christmas, on Dec. 26.

The at-will employees, who began working at the newly established One Florida Bank the very next day, did not give any prior notice. Florida follows the at-will employment law, which allows either the employee or employer to terminate employment at any time without any advance warning.

The lawsuit, filed Jan. 10 in federal court against One Florida and five ex-Seacoast executives, says that Diemer told Cross that "One Florida Bank wanted to take a one-time expense hit" that would have totaled $1.4 million (an average of $116,666 per employee) to cash the executives out of their Seacoast end-of-the-year bonuses and stock options if they had stayed.

According to One Florida Bank spokesperson Robert Thompson, the employees will retain the same job titles they had with Seacoast.

"We are focused on ... bringing on experienced community bankers who understand the importance of relationship banking," One Florida Bank president Rick Pullum said in a story published Dec. 27 by the Orlando Business Journal.

Before the executives left Seacoast for One Florida, some, including Diemer, allegedly accessed Seacoast’s confidential information, in an attempt to lure some customers to the new bank.

The lawsuit says that Diemer is one of the only employees to have had full access to a Seacoast database with customer information such as deposits, loan values, and habits and preferences. He had printed out the data from a local printer in the Lake Mary office on the day he resigned, according to the lawsuit.

Seacoast investigated its networks and technology systems following the mass resignation. Not only did they find a suspicious spike of users accessing the information, but an IP address that matched Diemer’s company laptop. The investigation confirmed that Diemer reviewed confidential trade secret customer information on Dec. 20 and 26, the lawsuit said.

We spoke to Kenneth LaRoe, the founder and former CEO of the socially conscious First Green Bank, which was sold to Seacoast Bank in 2018.

LaRoe is not affiliated with the employees who moved from Seacoast Bank to One Florida Bank, and said that the extent of his knowledge on the lawsuit is limited to the same Orlando Business Journal article – but he did have some thoughts about possible reasons behind the resignations.

"These people were high up at Seacoast," LaRoe told Orlando Weekly. "I mean, they were respected employees and to my understanding, they were all happy." LaRoe said that he didn’t think any changes made after First Green Bank and Seacoast Bank’s $115 million merger had anything to do with Seacoast’s mass resignation.

"It may just be a matter of opportunity to make more money," he said. "I don’t know any of the details about how much they were paid, but [One Florida’s $1.4 million expense] is pretty substantial divided by 12 people."

The break won't be easy, and legal expenses from the move will likely add up. Claims are being made against defendants Matthew Diemer, Joseph DeSousa, John Casebier, Brian Wickman and Garry Littler for "breach of the duty of loyalty that they owed to Seacoast during their employment." Additional claims are being made against Diemer, DeSousa, Casebier and Wickman for "misappropriation of trade secrets under the Florida Uniform Trade Secrets Act" and the federal Defend Trade Secrets Act. Diemer is also facing allegations that he violated the Computer Fraud and Abuse Act.

Further claims against One Florida Bank say they are "vicariously liable for the individual defendants’ misappropriation." One Florida Bank is also facing claims "for conspiring with the Individual Defendants to engage in the above-described wrongful and unlawful activities."

Mass corporate defections are already intriguing enough, and this story will likely continue to accrue interest from regulators.