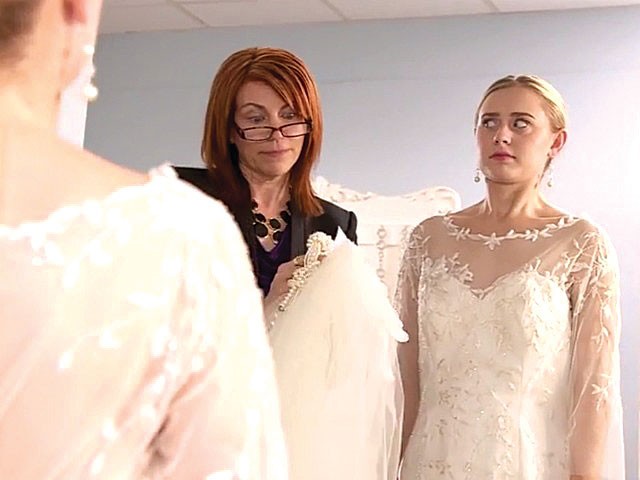 You know it’s a bad day when even lonely old doctor’s office magazine Time chimes in to tell you that your current campaign ad is a little worse for the wear, but last week, with its “Say Yes to the Candidate” ad – an all too obvious spoof on cultural candy crush Say Yes to the Dress, which you probably watched during your last NyQuil bedbound blackout – the College Republican National Congress received the distinction of creating what Time called “The Most Sexist Republican Ad of the Year.”

It was just the latest display of boxers and briefs in the conservative war on women (sometimes brought to you by Republican women; hello, Attorney General Pam Bondi and Orange County Mayor Teresa Jacobs) and, with all the transvaginal ultrasounds and other rapey legislation flying through the legislative air, likely not the last.

The Florida iteration of the ad – there are several, which are airing in different states – makes your candidates Charlie Crist and Gov. Rick Scott into brand names – you know, like Vera Wang – and proceeds to pat the heads of college-aged girls who like nice Republican things while their moms fumble with hard Democratic candies and demand the ugly, Crist-ian dress despite its flounciness. Guess who wins? Scott does, of course, though that’s not what polling is saying!

So many offensive responses from the right have clogged our social media feeds that we can’t really pay attention anymore – example: “glad Democrats won’t be considered the ‘woman’s party’ anymore”; seriously – so we’ll just let this one lie there in infamy.

You know who won’t though? Its subject and transitory funder Gov. Scott. We told you recently about how Planned Parenthood of Greater Orlando has had to fight to offer its full line of health services in Kissimmee – yes, it is having a vasectomy promotion in November, thank you – to the point of having to take it to court. Planned Parenthood prevailed in the end, but that’s not enough to settle the people who like to scream from sidewalks while holding doctored pictures of dismemberment happy.

Dr. John Littel, one of the more vocal pro-lifers (he even reached out to us when the clinic opened), was part of a little-reported meeting in Kissimmee last week at what appears to be a church in Buenaventura Lakes, according to our lousy attempts at deciphering Univision broadcasts. Also there, even applauding Littel (who regularly takes part in protests outside Planned Parenthood clinics, protests that have been known to turn violent), was Gov. Rick Scott. Scott told the Hispanic news outlet that he was indeed “pro-life” and that he believed in the “sanctity” of whatever happens after the Spanish voices overpower his languorous drawl.

Interesting in all of this is the fact that Littel, according to documents from the Kissimmee Police Department obtained by Happytown, has been trespassed as of May 14 from the Oak Commons property that houses Planned Parenthood and other medical offices. Trespassed! So somebody with a trespass from city government is being applauded by the governor. What message does that send? Not a good one, according to Florida Planned Parenthood PAC regional director Jenna Tosh, who suspects that Littel and Co. are using the governor to help circumvent a court ruling allowing abortions at the new Kissimmee office.

“In his first term, Rick Scott signed five pieces of anti-women’s health legislation,” she says in an email. “Now he’s working with groups and individuals who have been known to harass and intimidate women seeking life-saving care at Planned Parenthood health centers. It’s pretty clear that our governor is not looking out for the interests of women.”