Savage Love: ‘Am I ever allowed to retire from my husband’s kink?’ 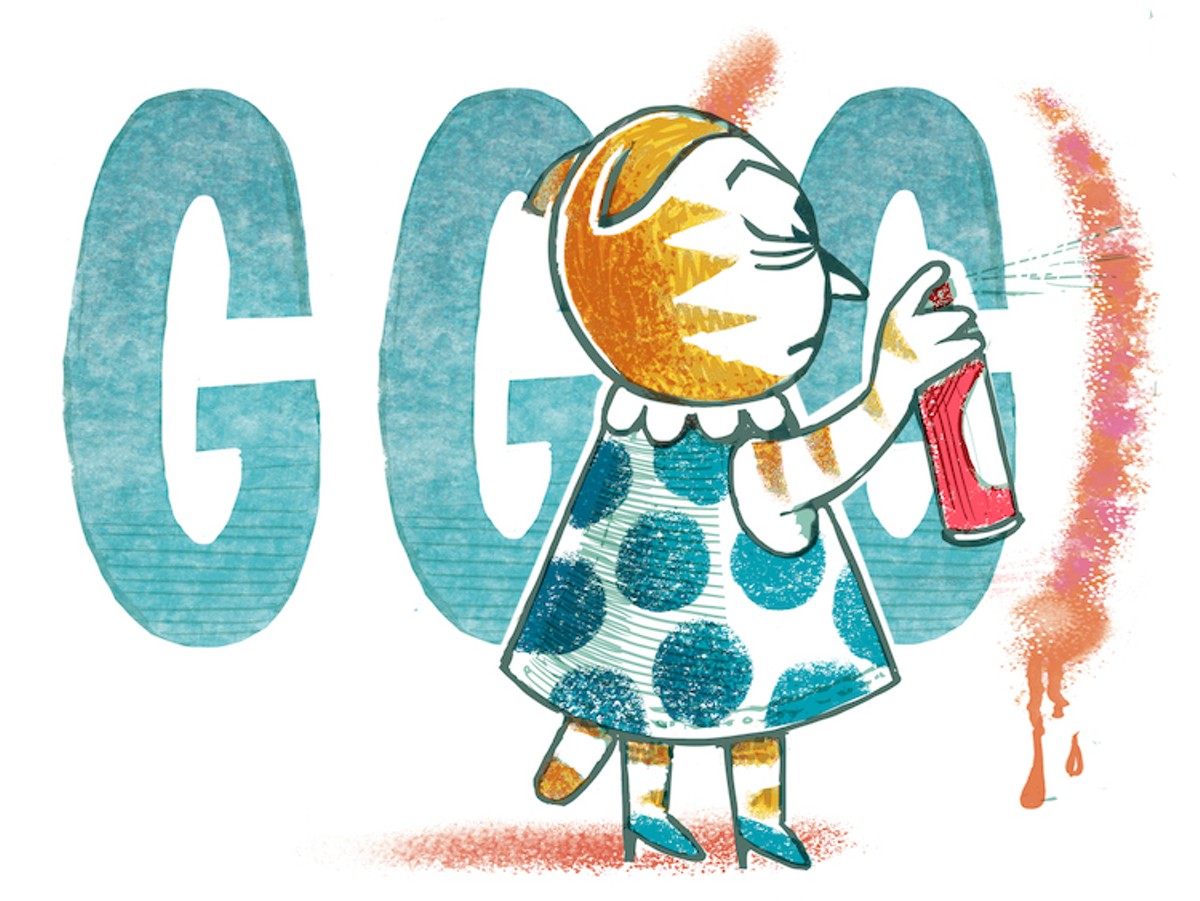 'Game Over' illustration by Joe Newton

Dear Dan: Is it ever OK to stop being GGG?

I've been with my husband for 26 years. Shortly after we got together, my husband disclosed a major kink: MFM threesomes. I was young and a virgin and up for anything then, but we didn't start hooking up with other men until around year six of our relationship.

Over the last 20 years we've been on-and-off with this. We had children, we took a break, and we found the time to go wild now and then. My husband's interests expanded into dominance play — owning me and sharing me — but I'm in my late 40s now and my husband is in his 50s. I'm approaching menopause and my sex drive has decreased. There were also instances where I was basically sexually assaulted — or at the very least, my boundaries were not respected on more than one occasion.

Long story short, I want to be done being kinky. I want my body to be mine. My husband and I have been having other marital problems, and he thinks my rejection of his kinkiness is a rejection of him. I've told him I'm still interested in sex, I'm just tired of being GGG. He says he isn't interested in vanilla sex with me because he is "disappointed." When I told him to outsource his kink, he said, "Good luck finding that as a married man."

Am I ever allowed to retire from his kink? Am I the asshole here? — My Years Being Obedient Done

Dear MYBOD: First and most importantly, if your husband stood by and did nothing while your boundaries were violated in front of him — or if he violated your boundaries himself — then there's an asshole in this marriage, MYBOD, and it ain't you. But seeing as you're still with your husband and still interested in having vanilla sex with him, I'm gonna assume your husband recognized how he failed you on those occasions when you were violated and that he's shown remorse, apologized specifically and profusely, and made whatever changes he needed to make for you to feel safe with him. If he's done none of those things — if he hasn't done all of those things — you should leave him.

Zooming out for new readers: GGG stands for "good, giving, game." As in, "good in bed, giving of pleasure, and game for anything — within reason." I believe we should be GGG for our partners and that our partners should be GGG for us. Being GGG, however, does not mean doing whatever your partner wants. That's why the final G has always come with that qualifier: "game for anything — within reason." Being game means recognizing your partner will have sexual interests that you don't share and being up for giving those things a try — so long as they're reasonable. "Reasonable" is a subjective standard, of course, and we all get to decide for ourselves what may or may not be reasonable.

Back to you, MYBOD. A kink for MMF threesomes is not a thing for feet or light spanking. It's a big ask. And if your husband knew he needed MMF threesomes to feel sexually fulfilled, sharing that when he did — early in the relationship — was the right thing for him to do. He laid his kink cards on the table before you got married, before you had kids, and when you could easily walk away.

You didn't walk away. You told him you were open to the idea — you told him you were one of those rare "up for anything" virgins — and he didn't rush you into anything. Six years went by before you had your first threesome. And while MMF threesomes probably aren't something you would've sought out on your own, MYBOD, I'm hoping you enjoyed some of them — you know, the ones that didn't involve boundary violations so egregious that you experienced them not as sexual adventures you were having with your husband, but as sexual assaults your husband participated in and Jesus Fucking Christ on the Cross.

In all honesty, MYBOD, I'm having a hard time getting past those boundary violations. But seeing as you got past them — seeing as you're still interested in being with your husband — I'm going to continue to assume he somehow made things right and advise you accordingly. If he didn't make things right, disregard my advice and divorce the motherfucker already.

All right, you asked me if you can stop being GGG, MYBOD, and my answer is no. I think you should continue being GGG. That doesn't mean you have to continue having MMF threesomes with your husband. You can decide you're done with that — you can take them off the menu permanently — while still being GGG in other ways. You're also allowed to be done with Dom/sub play. (Your husband never owned you and your body was never his to share. That was naughty dirty talk you indulged in, not a deed of sale you have to honor.) And doing what you're doing — giving your partner permission to get a specific sexual need met elsewhere — is one way a person can be GGG. There's this need, this kink of his, that's important to him — so important he brought up early on — and you met that need for a long time but can't meet it anymore. But you're good enough, giving enough, and game enough to give him your blessing to get his kink on with other people. So you haven't stopped being GGG. You're being GGG in a different way now.

And just as you're not obligated to have kinky sex with your husband, MYBOD, your husband is not obligated to have vanilla sex with you. If you think he's withholding sex right now because he's disappointed, well, maybe you can see how it might be disappointing and give him a little time to get over it. But if, on the other hand, you think he's withholding sex to manipulate you into having threesomes again, MYBOD, that's a deeply shitty thing to do and you should leave him.

P.S. Please show this to your husband, MYBOD: Dude. GET OVER YOUR DISAPPOINTMENT ALREADY. You had a good run. I hope you're grateful and I hope you found some way to make up for boundary violations. Assuming you did: The sooner you stop fucking sulking and start fucking looking, the sooner you'll find couples seeking male thirds. And you know those couples are out there, because you and your wife used to be one of those couples. Far from being a stumbling block, the fact that you're married is a selling point for many couples seeking thirds. (A married or partnered man is seen as less threatening for obvious reasons.) And I don't know if you've been online recently, but hot daddies are very much in demand these days, and dominant daddies get a lot of play. Your wife isn't taking your kink from you. She's telling you to get this need met elsewhere. You are not being wronged. Stop being a baby and an ingrate. Jesus!

Dear Dan: I’m freshly out of a relationship and new to Grindr and I’m realizing that for me to get hard, I need slow kissing, I need to vibe to music, and especially need a soft touch on my dick. Too many guys pull on it with no lube and that makes me go soft. Slowly kissing to a chill song is my jam. Also, my dick is sensitive near the bottom of the shaft and I need wet fingers to go all the way down to the base of my dick in order to come. Is there a quicker way to describe this? Is low-on-the-shaft stimulation called something? Is there a term for this or a name for me? Or do I need to send a paragraph to all the tricks I message? — Very Into Being Erect

Dear VIBE: That’s called "the way you like it." Alternately, it’s called what works for you, what makes your dick hard, and what gets you off. The precise way you like it — the kissing that works for you, the music that puts you in the mood, the spot on your dick that puts you over the edge — doesn’t have name, VIBE, and it doesn’t need one. But who knows? By this time next week, the way you like it could have a name and a pride flag and a bunch of online cis het allies ready to shout down anyone who isn’t convinced the slow-kiss-me-vibe-to-chill-music-touch-the-base-of-my-lubed-up-cock community needed a name and its own float in the pride parade.

But just as you don’t really need a pride flag, VIBE, you don’t need to send a FAQ and an NDA to each potential trick you message on Grindr. All you gotta do is tell the guy who shows up at your apartment that you’re into soft kissing — the music you like can already be playing — and then show him how you like your dick stroked. The guys yanking your dick without lube aren’t trying to make you go soft. They’re making their best guess about what might work you, a guess most likely informed by what works for them and other guys. I promise you, VIBE, the guys from Grindr aren’t pulling on your dick maliciously. Quite to the contrary, VIBE, your gentleman callers are pulling on you dick with the best of intentions. Offer those gentlemen some cheerful, constructive feedback in the moment, VIBE, and most will start stroking your dick just the way you like it.