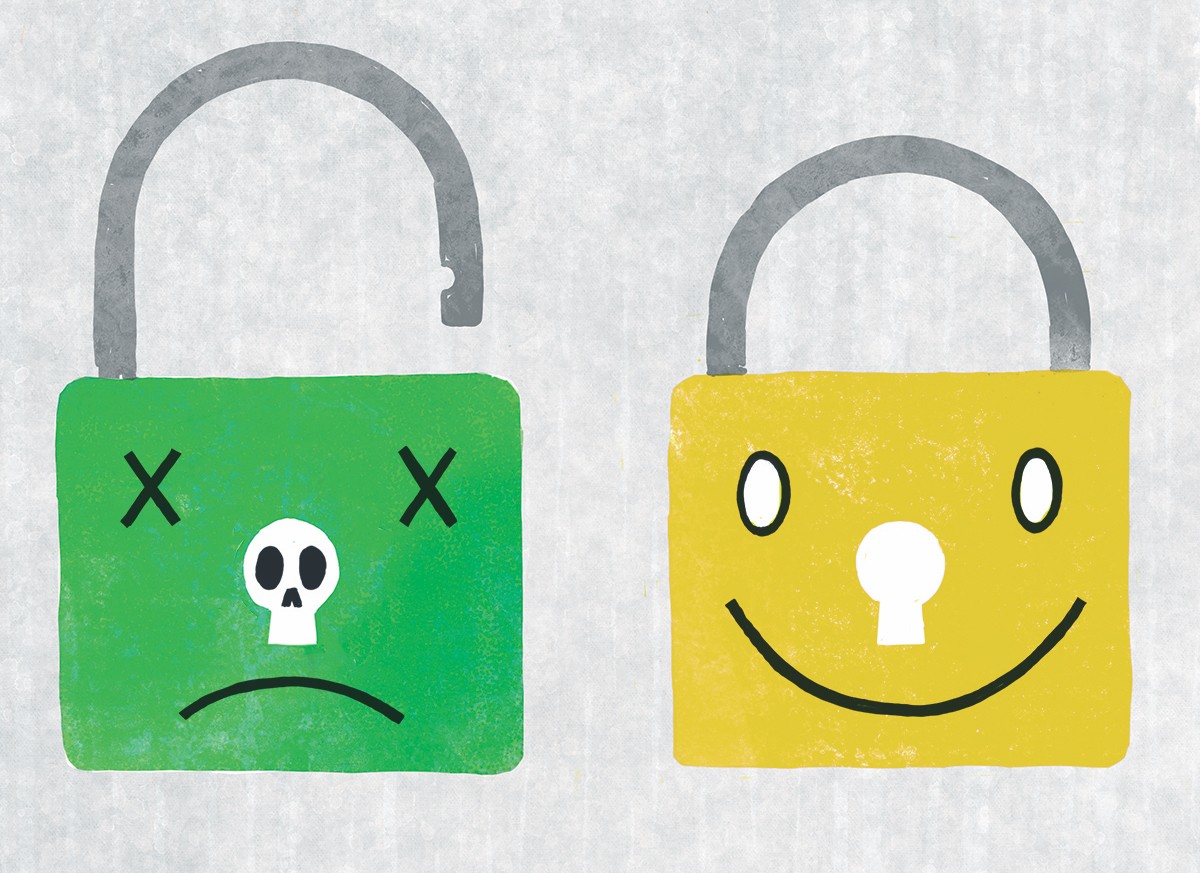 My husband and I got married in August of 2019 and we were together for over five years before getting married. I'm very happy and love him with all my heart. I want to have his kids and support his entrepreneurial efforts as he supports mine. We don't fight, we just have some tiffs here and there. The kicker is that I have a tough time feeling him during sex and he doesn't last as long as I would like him to. We're adventurous enough to try different things, i.e. toys and different positions, but I find myself sexually unfulfilled. He also isn't very willing/interested in going down on me; in fact, he has not once gone down on me. I'm also finding myself attracted to and fantasizing about other men. I don't know what the solution is. I'm not opposed to opening up a marriage but I worry that I'm just being selfish and that it's too soon to try or even discuss it at any length. I did bring up a crush I have on a co-worker and my husband said, "There's nothing wrong with having a snack." What did he mean by that? Do you have any other insights or suggestions on what to do?

I shared your letter with Tristan Taormino, author of Opening Up: A Guide to Creating and Sustaining Open Relationships. Through her books, lectures and podcasts, Taormino has helped countless couples navigate the transition from monogamy to non-monogamy. But before we dive into the specifics of your situation, MND, there's something Taormino and I want to make clear to all.

"In this time of a global pandemic, thinking and talking about non-monogamy is all you can do right now," Taormino says. "This goes for everyone: No new sex partners until public health experts say we can go back to standing closer than six feet apart. Even then, we're going to have to proceed with caution."

Listen up, people: The woman who literally wrote the book on open relationships says open and poly relationships are canceled for the time being. "Yup, canceled," Taormino says, "unless every one of your partners lives with you."

While COVID-19 isn't classified as a sexually transmitted infection, having sex with someone who has coronavirus would almost certainly result in transmission. And since people who get infected typically don't show symptoms for up to two weeks, the fact that someone appears to be healthy doesn't mean they are corona-free. Someone can look and feel great and be both infected and infectious.

So for the time being we should only be having sex with a sex partner we live with. If you have more than one sex partner and you're all staying in the same place, great! Poly isn't canceled for you and your partners. But we shouldn't be hooking up with new partners in person or going to see established partners we don't live with. That goes double for meeting up with non-cohabitating partners who have other partners and whose other partners have other partners of their own. The good news is that sexting and dirty video chats are both allowed and encouraged, kids, so we can get off online with new people as well as established partners who live on the other side of town or the other side of the world. Hell, get the whole polycule together on Zoom – just don't actually get together (or get under) anyone you don't live with.

OK! With that out of the way, MND, we're going to answer your question.

During the pandemic, we shouldn’t be hooking up with new partners in person.

"I'm glad MND is being honest with her husband about her desires, but let's take that further with even more specific talk about what's missing in her sex life," Taormino says. "In her letter, I heard: pussy-eating, intense enough sensation from intercourse and longer sex sessions. I'll translate that: She's missing pleasure, reciprocation and orgasms for her. She is NOT being selfish for wanting these things. They are pretty fundamental aspects of a sexual relationship, and she needs to address them with her husband first."

Backing way the hell up: Assuming you knew about my column five years ago, MND, it's telling you didn't ask for my advice back when you realized your new boyfriend was never going to eat your pussy. (Spoiler: I would've told you to dump him.) Since you chose not to break up with your boyfriend over the lack of cunnilingus back then and you don't want to divorce your husband over it now, MND, it would seem that going without oral – at least going without at home – is the price of admission you're willing to pay to be with this guy.

As for your other issues about your sex life with your husband – you don't "feel him" during penis-in-vagina intercourse and it's over too quickly – the right toys could certainly help. But if your husband ruled out penetration toys that were bigger than his cock, or if you didn't order any that were bigger than his cock to avoid hurting his feelings, you're gonna have to broach the subject of buying some toys you can really feel. And since experimenting with new positions didn't help your husband last longer, you should try alternating between toys and his cock during PIV, which will make both the sex (and the husband) last longer.

"If MND's husband is really in this relationship, he should be open and willing to give most anything a try," says Taormino. "MND really needs to see that he's as interested in her pleasure and satisfaction as he is in his own. And if there's something she wants to try or something that really turns her on and gets her off that her husband doesn't know about, now is the time to share the juicy details."

As for opening up the relationship, I wouldn't advise most people to initiate that convo at this moment. Because if the conversation goes badly – and they often do at first – that could mean sheltering in place with an angry person. But based on your husband's reaction when you confessed having a crush on a co-worker, I think you could risk discussing opening up while you're locked down. Your husband didn't say there was nothing wrong with fantasizing about a snack, MND, he said there's nothing wrong with having a snack. That's not a green light to immediately outsource getting your pussy eaten. But his calm reaction when you confided in him is a good sign.

First things first: you need to work with your husband on improving your sex life at home and you should have a convo about that – and a convo about ordering some new sex toys – before you make plans to open up the relationship and start getting your pussy eaten elsewhere.

"Exploring non-monogamy is one way to address sexual incompatibilities and expand our capacity for love and intimacy," Taormino says. "But the stuff between the two of them needs to gets talked about first. Otherwise, you're glossing over the issues with something new and shiny."

I've been in love with a close friend for years. Social distancing has thrown major life "regrets" into high relief and I would be crushed if something happened to him. We've both been distancing for two weeks and neither of us have symptoms. Can I have him come over to hang out? What if we ended up making out or hooking up? He has housemates and I don't, so he's around more people than I am, but everyone at his house has been distancing too. I see so many questions about hooking up with randos and that seems like a clear no-no. But what about hooking up with someone you know?

Also a no-no, NR. We're not supposed to come within six feet of anyone we don't live with, which means you can't invite this guy over to play cribbage and/or fuck you senseless. If you wanted to invite him over to stay, you could shack up and wait out the lockdown together. But you can't invite him over just to play. Instead of inviting him over and hoping for something to happen, NR, you should give this guy a call and tell him how you feel. He might feel the same way and want to be your quarantine buddy. But if he doesn't feel the same way, at least you'll know. Rejections we can get over, NR, but regrets are for life.

– This story appears in the April 1, 2020, print issue of Orlando Weekly. Stay on top of Central Florida news and views with our weekly newsletters.