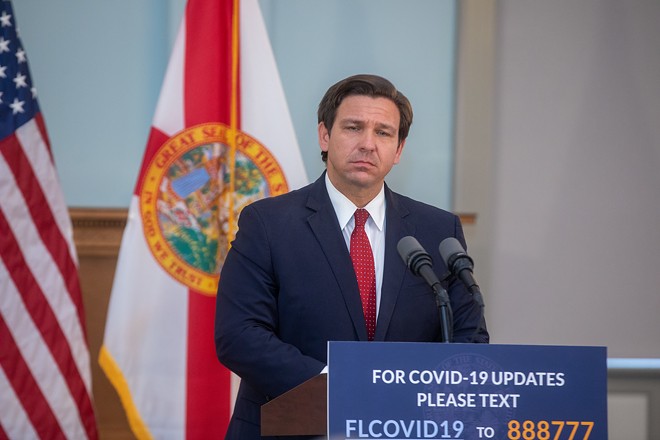 Gov. Ron DeSantis was noncommittal Wednesday about whether he will ask lawmakers to further restrict abortion in Florida, as the nation awaits a U.S. Supreme Court ruling that could overturn the landmark Roe v. Wade abortion-rights decision.

A leaked draft opinion published Monday by Politico would rescind Roe v. Wade, leaving abortion decisions to states. The draft opinion was authored by Justice Samuel Alito, Jr. and backed by members of the court’s conservative majority. Chief Justice John Roberts on Tuesday confirmed the document’s authenticity, but a news release accompanying Roberts’ statement said the draft “does not represent a decision” by the court or any justice’s final position.

Since the Politico report, speculation has swirled about whether Florida will limit abortion access beyond a new state law that will prohibit abortions past 15 weeks of pregnancy. DeSantis signed the measure last month, and it is set to go into effect July 1.

Asked by reporters Wednesday about whether an upcoming special legislative session could be expanded to address abortion, DeSantis appeared hesitant absent a final Supreme Court ruling.

“I would just caution people, you know, you can leak stuff out of a court, which is really unprecedented. But let’s see when you actually have something (a ruling) rendered. Because, how they negotiate these things, I don’t think any of us really know,” DeSantis said during an appearance in Clearwater. “They keep it all very secretive.”

DeSantis called a special session to start May 23 to address the state’s troubled property-insurance system. At his Clearwater appearance, the governor described tackling the insurance issue as a necessity. The governor, who went to law school at Harvard, said he expects a Supreme Court ruling on the abortion issue in the coming weeks.

“I would imagine we’d probably get something (at the) end of this month, and into June. And we will take a look at it at that time,” DeSantis said.