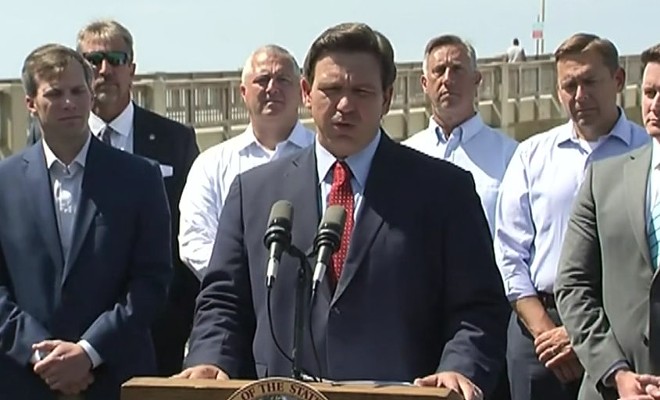 After getting caught last week in an easily disprovable lie about a fake “Fox News exclusive,” Florida Gov. Ron DeSantis will now give a real exclusive, but to a much, much worse television network.

On Wednesday, May 12, DeSantis, who seems to be eyeing a presidential run in 2024, will join former Trump Administration spokesman and Dancing With The Stars contestant Sean Spicer for a town hall discussion on Newsmax.

The far-right network has become a home for Capitol rioters, QAnon quacks, election truthers, and run-of-the-mill racists. To top off this conservative game of Mad Libs, the DeSantis event will be filmed in the massive retirement community, and Trump stronghold, The Villages.

"Governor DeSantis has proved his resolve and confounded his skeptics over the past year, leading his state to excellence in fostering a thriving economy, rolling out the COVID vaccine, and guarding religious liberty," Spicer wrote in a statement. "This Town Hall will give Newsmax viewers deeper insight into the reasons why DeSantis is a true governor of the people."

It’s unclear exactly what will be discussed, though it’s safe to assume they won’t be talking about how the 2020 election was rigged, repeated claims Newsmax literally had to withdraw and follow with an apology to Dominion Voting Systems.

The Spicer/DeSantis event will air at 6 p.m. ET.