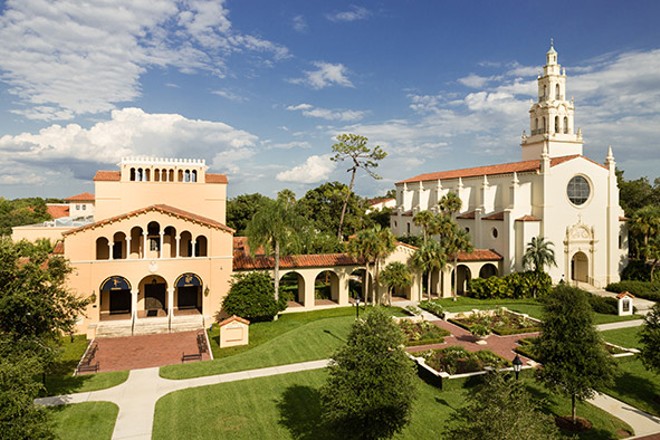 Photo via Rollins College
Students and faculty at Rollins College in Winter Park have been told to "go to the nearest room and lock the door," over a shooting in the nearby area.

The private college sent out an alert at around 3:45 p.m., saying "We have been instructed by Winter Park Police to shelter in place. If you are on campus, take shelter in the nearest available room and lock the door (if possible). Remain in place until the police, or a campus administrator known to you, gives the ‘all clear’. Call 911 if you have information. Standby for further information."

The college also tweeted out a warning:

According to Winter Park police, the shooting occurred in the 900 block of Orange Avenue, and they're currently advising the public to stay out of the area.


The Winter Park Police Department is working a shooting in the 900 block of Orange Avenue. Please stay out of the area.

Valencia College, which also has a campus in the area, said officials are "monitoring the situation."

A video surfaced from inside Spatz Bar, located at 1025 W Fairbanks Ave, showing police officers with their guns drawn at nearby Martin Luther King Jr. Park. A police helicopter and officers armed with long rifles have also been spotted in the area.


Video from inside Spatz of police with guns drawn at Martin Luther King Jr. Park. Rollins College is still on lockdown. pic.twitter.com/85AaPQOgNC

Details surrounding the shooting are unknown at the moment, however Winter Park police say the suspect is a white male in his 20s, armed with a handgun, who was last seen wearing a gray shirt and long black shorts. The suspect is considered armed and dangerous.

The suspect we are looking for is a white male armed with a handgun. He was last seen wearing a gray shirt and long black shorts. Please do not approach the suspect. Call 911/407-644-1313


UPDATE: Rollins College has lifted the lockdown, but still advises to stay away from Orange and Denning.


Per @WinterParkPD, Rollins lockdown has been lifted.
Please avoid the area around Orange and Denning until further notice. If you see any suspicious activity, call 911.

UPDATE: While the lockdown at Rollins has been lifted, Winter Park Police Department says they're are still searching for the suspect.

The scene around Orange Avenue and the surrounding areas is still active. Please stay out of the area. We are still looking for the suspect (White male, gray shirt, black long shorts). Please do not approach the suspect. If in contact, immediately call 911.

UPDATE: Officers with the Winter Park Police Department have now identified the shooting suspect as Jared Christopher Vasquez. The image on the left shows the appearance and the clothing worn at the time of the incident, police say. Vasquez is still at large, and considered armed and dangerous.


We have identified the subject as Jared Christopher Vasquez. The photograph on the left is his appearance and clothing worn at the time of the incident. If you see him, please do not approach the suspect. Immediately call local authorities at 911. Suspect is armed & dangerous. pic.twitter.com/D55IJkanDd


UPDATE: Officers arrested Vazquez after they found him hiding by a trailer near the 900 block of Orange Avenue, the area where callers reported a man had been shot and injured Monday afternoon. Police say they exchanged gunfire with Vazquez, though no one was hurt. More here.