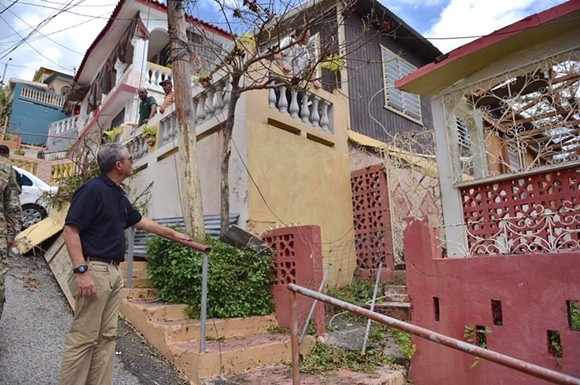 Scott says he notified the Florida National Guard and the Florida Fish and Wildlife Commission to be on standby for deployment to Puerto Rico if the U.S. territory makes an official request for assistance. The governor is also asking Florida state colleges and universities to allow Puerto Rican students displaced by Maria to pay in-state tuition.

Puerto Rico Gov. Ricardo Rosselló has said the island is on the brink of a humanitarian crisis as they wait for help from federal officials.

"The heartbreak that our friends in Puerto Rico are enduring following this devastating storm is unimaginable and our prayers are with every family who calls this beautiful island their home," Scott said in a statement. "We know how important it is to share resources with our friends and neighbors during these times, and I was able to speak with Governor Rosselló last week to tell him that Florida will provide whatever resources are needed to help families in Puerto Rico rebuild."

"Hurricane Maria decimated Puerto Rico and the US Virgin Islands as people lost their homes and property, their schools, and their businesses. They’ve suffered catastrophic loss," said Rep. Robert Asencio in a statement. "Many in the region have family in our state, and with the possibility of no power for months, Florida may see a large arrival of refugees. It’s imperative that Florida is prepared accordingly to ensure that people have access to schools, housing, jobs, and the public health services they desperately need."

Republican Central Florida lawmakers Rep. Rene Plasencia, R-Orlando, and Rep. Bob Cortes, R-Altamonte Springs, have also started a bipartisan group of Puerto Rican and Latino legislators to help the island called "FL2PR." The organization plans to work with the private and public sector to coordinate disaster supplies to Puerto Rico and help evacuees who may leave the island.