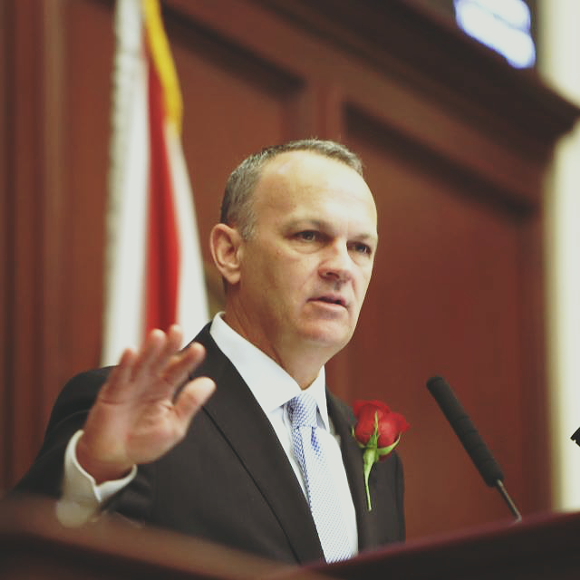 Photo via Richard Corcoran/Facebook
House Speaker Richard Corcoran wants a dozen local tourist-development councils that have broken ties with Visit Florida —- over new state rules Corcoran helped impose —- to outline how they spend tax dollars. Corcoran, R-Land O' Lakes, sent a sharply worded letter Friday to 12 regional tourism councils, saying the House still has the authority to review their books when it comes to taxpayer money. “This attempt to shield financial information from public scrutiny required by the transparency and accountability provisions of House Bill 1A is not acceptable,” Corcoran said in his letter, referring to a bill that passed during a special legislative session in June. In the bill, lawmakers established new rules for the state public-private agencies Visit Florida and Enterprise Florida. The rules included disclosure requirements for regional tourism boards participating in a state program known as the “Targeted Marketing Assistance Program.” The boards would have to make public local operating budgets and travel and entertainment expenses and provide details of salaries and benefits of staff and board members tied to public and private funds. The change resulted in 12 agencies cutting ties with Visit Florida: Visit Tampa Bay, Visit South Walton, Visit Orlando, the Amelia Island CVB, the Brevard County Tourism Office, Discover The Palm Beaches, Experience Kissimmee, the Florida Keys & Key West Tourist Development Council, the Franklin County TDC, the Greater Miami Convention & Visitors Bureau, Orlando North Seminole County Tourism and the Santa Rosa County Tourist Development Office.

The Florida Association of Destination Marketing Organizations, which represents local tourism-promotion agencies, said Friday evening that information about expenditures is publicly available, regardless of whether the agencies are affiliated with Visit Florida.

“Local tourism marketing organizations already operate under multiple layers of transparency and accountability and are happy to comply with these measures,” Robert Skrob, the association’s executive director, said in a prepared statement. “As responsible stewards of local tax dollars, every destination marketing organization has the obligation to ensure any dollars spent on tourism promotion will yield the best return on investment for their community.”

Senate Appropriations Chairman Jack Latvala, R-Clearwater, has said lawmakers will need to review the changes that created fissures between the state tourism-marketing agency and regional tourism groups. Latvala has also alleged that the changes were more about scoring political headlines than effective legislation. “In the case of that bill, and the House of Representatives' efforts in the whole economic-development and tourism area, it was all about making political points, all about trying to make headlines, trying to raise your name identification, whatever,” Latvala said during an appearance Aug. 4 in Blountstown. “And what we've done is make a product that is going to be very hard to implement.” “And I'm sure we're going to have to come back next year and work on it a little bit,” Latvala continued. “I don't know the House speaker understands that or frankly cared. That's the same House speaker who introduced a bill that would have eliminated Visit Florida, eliminated Enterprise Florida, eliminated every other economic, 18 other economic-development programs we have in Florida. And I'm not sure he cares.” Latvala is running for governor in 2018, while Corcoran is considering a run. Corcoran estimated the 12 local agencies collect about $585 million a year in bed tax dollars, about 62 percent of money collected from tourists in the state. Corcoran said in his letter the new requirements are “not onerous.” In a statement accompanying the letter, Corcoran added that the tourist development councils are “sadly mistaken” if they think they can “hide from transparency.”