Blood and oil: The remix 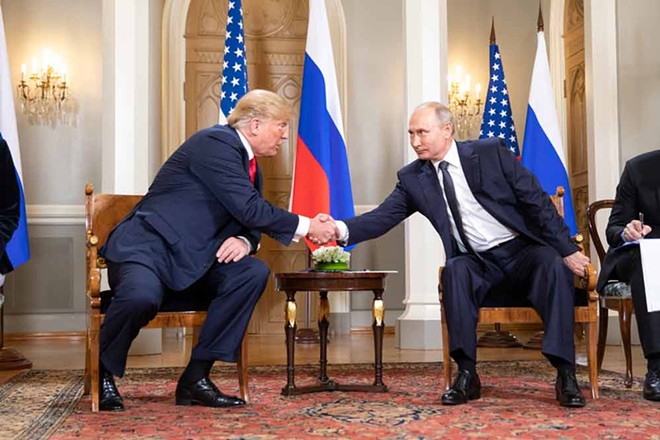 Having spent the last week earning my Ph.D. in Kremlinology from the University of Google, I’ll now explain how to quickly remove Russia from Ukraine without escalating the war into a continental or global or nuclear fight.

OK, I won’t. I’m not sure there is a good solution, let alone a quick one. If Russia didn’t have a nuclear arsenal that could wipe out life on Earth, Vladimir Putin wouldn’t have dared thumb his nose at NATO. If the West hadn’t pressured Ukraine into giving up its nuclear weapons in the 1990s, Russian forces wouldn’t be (slowly) trudging their way toward Kyiv. Then again, if an unstable, often corrupt breakaway Soviet republic had kept its nukes back then, who knows what might have happened?

The experts I read and follow seem to think that Putin has already lost, at least in terms of long-term geopolitical goals. The economic sanctions — which this weekend he likened to an act of war — will devastate Russia’s economy. The Russian military has proven to be both inept — bogging down before reaching Kyiv, its supply lines running thin — and brutal, committing war crimes streamed live on the internet. “Winning” Ukraine will commit the Russians to fighting a years-long insurgency backed by Western money and guns (and covert operatives) while leaving the country isolated — except, perhaps, from China.

To understand how badly things are going for the Kremlin, you need only see the country’s devolution from authoritarianism to totalitarianism in a week, with dissent made illegal, protesters arrested and subjected to lengthy prison terms, and independent media banned. That’s not the sort of thing countries waging righteous, victorious campaigns do.

For the first time since Sept. 12, 2001, the West is unified against a common foe in a conflict with little moral gray area.

This wasn’t the plan.

Putin’s investment in Donald Trump was designed to weaken NATO, softening the ground for an expansion of Russian power into Ukraine. Had Trump been re-elected, according to former national security adviser John Bolton, he would have abandoned the alliance. And it’s worth noting that Trump was first impeached for threatening to withhold defensive weapons from Ukraine unless Ukraine’s president ginned up dirt on Trump’s political adversary.

Trump didn’t just spend his presidency disrupting Western alliances. He also acted as Putin’s propagandist: lobbying for Russia to rejoin the G-8, defending Putin’s invasion and annexation of Crimea, and praising him as strong. Trump’s supporters likewise found a fellow traveler in the ex-KGB man. “Christian” leader Franklin Graham applauded Putin’s crackdown on the LGBTQ community, and Tucker Carlson accused Ukraine of being a “pure client state of the United States State Department.”

But Trump is now reduced to discussing global affairs with an aging golf pro and musing about framing China for attacks on Russia — which is, to be fair, the kind of strategy I might have conceived in sixth grade. While the West has good reasons not to give Ukrainian president Volodymyr Zelenskyy the no-fly zone he wants — an actual act of war against an increasingly desperate nuclear enemy might not end well — the two other requests he made to Congress in a Zoom call last week have merit.

First: Give them jets — specifically, surplus Russian-made Warsaw Pact jets. There’s no reason not to.

That, as Oleg Ustenko explains in Project Syndicate, would doom Putin’s military adventurism, and quite possibly the regime itself.

Ustenko writes: “Russia continues to export oil and gas. Indeed, the war has boosted the price for these products, benefiting the most important sector of the Russian economy. So, a week after it began, Western energy consumption is still financing Russia’s invasion of Ukraine, and the Russian elite is doing better than ever. There is no way around it: The only way to stop Russian President Vladimir Putin’s aggression is to impose a comprehensive boycott on all Russian energy products.”

In January, oil and gas tariffs accounted for nearly half of Russia’s budget. If they go away, the government will collapse.

That seems like a no-brainer. The U.S. could impose a sanctions scheme that, if fully enforced, would prevent Russian oil producers from profiting off of supply shortages. The problem: price. The price of oil, which has been spiking since the Ukraine crisis began, would soar, raising prices at the pump. The Biden administration, which has been trying to tamp down concerns about inflation, would suddenly have to contend with $4.50-a-gallon gas until production elsewhere kicked in. And, of course, the most hawkish Republican today will blame Biden for his F-450’s gas bill tomorrow.

A real embargo would also require the European Union to play ball, and the EU is very dependent on Russian natural gas. There are ways to accomplish this goal, especially in the short term. But they won’t be easy or cheap, and sacrifice in the name of far-away humanitarianism isn’t an easy political sell, no matter the cause.

Were we — as a country, as a civilization — able to take the longer view, this would be yet another lesson in the dire need to abandon fossil fuels. Beyond the fact that burning them is literally killing our planet, their production tends to enrich and empower the worst people. (It’s hard to imagine a war for solar panels.) So long as there is oil, blood will be spilled to keep it flowing, whether in the Middle East or Eastern Europe.