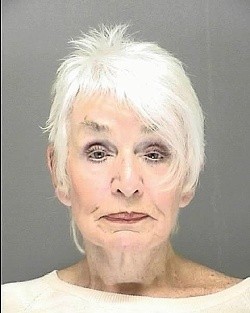 An arrest has finally been made in the case of Dumpling, the golden retriever from Port Orange who went missing February 5. Celeste Neese, 75, was booked into Daytona Beach's Volusia County Branch Jail on charges of grand theft, dealing in stolen property, and providing false information to investigating law enforcement after surveillance video surfaced of Neese passing Dumpling off to an unknown couple at an Ormond Beach Wal-Mart.

Neese, who previously dog-sat Dumpling for owner Wayne Dreier, initially denied to investigators that she was involved in the dog's disappearance, although she probably didn't help her case by stating that "even if she knew where the dog was, she wouldn't tell." Neese made it clear to sheriffs that she disproved of Dreier's care methods for two year old Dumpling and the pooch would be "better off with another family."

The couple who received Dumpling in that Wal-Mart parking lot had no idea the dog was hot. Upon finding out, they passed the canine off to the Flagler Humane Society.  Not to worry, though: Dumpling is now back with his owner Wayne Dreier, licking stuff and generally being happy. Meanwhile, Celeste Neese will have to spend the rest of her life dealing with Cruella de Vil jokes, and not just because she bears passing resemblance to the classic cartoon villain.