Today, Orlando Police were called to attend to what they're saying was a "large, disorderly crowd" forming outside of a beauty supply store in Orlando's Pine Hills neighborhood. According to news reports, the Beauty Exchange on Pine Hills Road was holding a grand opening sale for its new location. They were offering deals on hair extensions and other beauty supplies to the first 50 and 100 customers in the door. Apparently, people began lining up before the store opened, and people began pushing and shoving when the doors opened. In the video above, from WKMG Local 6, police attempt to get people to move away from the doors. When that doesn't work, they use pepper spray to get them to disperse.

According to OPD public information officer Sgt. Lovetta Quinn-Henry, officers were "unsuccessful" at gaining control fo the crowed, "therefore they sprayed over the heads of the crowd to gain control."

She says that peace was restored and no one was injured or arrested. "The incident is being reviewed to make sure everything was within OPD policy," she says. "When officers spray into large crowds, not directed at a specific individuals, its typically to gain control of a large group people who has failed to disperse or move from a specific location." 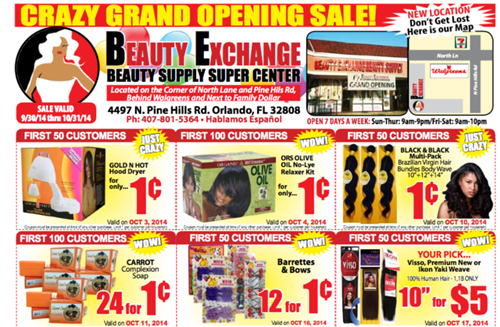