Pink bunny statue in Lake Como park is being relocated 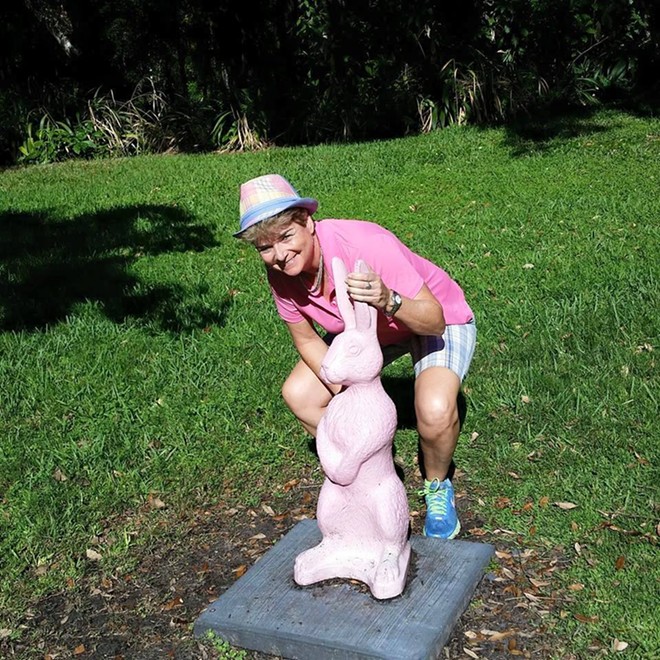 via Facebook
It appeared in Lake Como park in spring 2014 – a statue of a pink bunny perched on its haunches was suddenly peering out at traffic that drove around the east side of the traffic circle. Another bunny statue just like it appeared in Langford Park, as well.

The statues were erected by City Commissioner Patty Sheehan, who applied to have them installed in honor of her former aide, Chase Smith, who died of cancer in 2013. Smith played the Easter bunny for Easter egg hunts in both Como and Langford parks, and Sheehan thought it would be a nice way to honor his memory and his contributions to Orlando.

However, it seems some residents of Lake Como Park had recently begun complaining about the statue by Lake Como, and today Sheehan announced on her Facebook page that she's going to relocate it to a spot in Colonialtown:

The pink bunny will be moving from Lake Como Park. A neighbor there has been accusing me of violating monuments and memorials policies at the city. I did not, but I do not want my dear Chase ' s memory to be violated by mean spirited people. To his numerous friends who donated, fear not! The Colonialtown Neighborhood Association voted unanimously last night to put the statue in the playground in their park. To my many dear friends in Lake Como, I am not upset with you. I did get angry at the mean things people said about the statue. Sometimes people forget that I am human, and was grieving the loss of someone I loved very much. Some people had no respect. But that is their problem.
Chase's, memory will live on in the giddy laughter of children searching for Easter eggs in the shadow of the pink bunny.


The bunny statues were the subject of a video report put together by Sentinel reporter Jon Busdeker last year. You can watch the video below.

About your Pink Bunny article, it was one mean resident who didn’t like the bunny and then harassed the commissioner. Most, if not all of the rest of us have grown to love the Pink Bunny. Our kids stop by and visit him every time we go to the lake. It’s a real shame one mean-spirited jerk has ruined it for the rest of us, and it is also a real shame your article makes our neighborhood out to be a shitty place full of assholes like that guy. When in reality, it is a wonderful neighborhood filled with kind, truly neighborly people who look out for one and other. I find it disturbing one man’s complaints overrule everyone else’s opinion on it. Why don’t the rest of us have a say in this? Anyway, there are a bunch of Lake Comoans who are sad/disappointed/pissed about the bunny being taken from our community with no say from residents at all.

The pink bunny is not the only piece of public art that's endangered this week. Check out this story about how the FDOT told the city it had to take down a pole that had been turned into a sculpture.