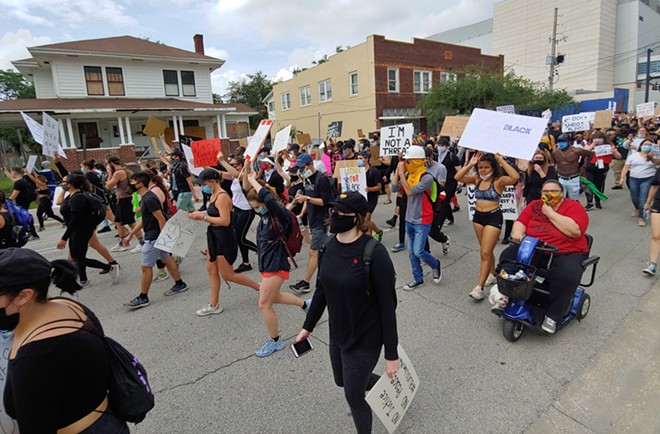 Photo by Dave Plotkin
A very large and impassioned crowd gathered in downtown Orlando for a peaceful rally and march on Tuesday afternoon. This fourth day of protest stretched long into the evening, and was unfortunately marred at the end by the police deploying tear gas yet again to disperse protesters.

The Justice for George protest kicked off around 3 p.m. yesterday in front of Orlando City Hall. The rally's guest speakers included Tamika Lyles, president of Osceola County Black Caucus, addressing a crowd that was tightly packed into the plaza in front of City Hall and spilling out onto a closed Orange Avenue. The crowd listened attentively as possible solutions for the long game were offered to begin systemic change and police accountability.

After the speakers finished, the crowd joined as one for chants of "George Floyd" and "No Justice, No Peace" before setting off to march through Parramore to OPD headquarters. We were absolutely floored by the size and numbers of the crowd, estimated by WESH at around 2,000 strong. Watching the huge throng of bodies move through downtown in wave after wave was an amazing sight. This was a group that was diverse, determined and, for the most part, very young. (Many were masked, too, given concerns over coronavirus.)

At varying points along the marching route, organizers had volunteers posted up, dispensing water and oranges to protesters, and we spotted at least one designated cleanup person collecting trash. The level of organization and focus was high. Residents along the marching route came out to watch, wave and offer support. It should be noted as well that police presence along the route was very heavy, and the sounds of helicopters were a constant background buzz. The march ended at OPD headquarters on South Street and Orange Blossom Trail, where the protesters chanted, took a knee and waved signs. 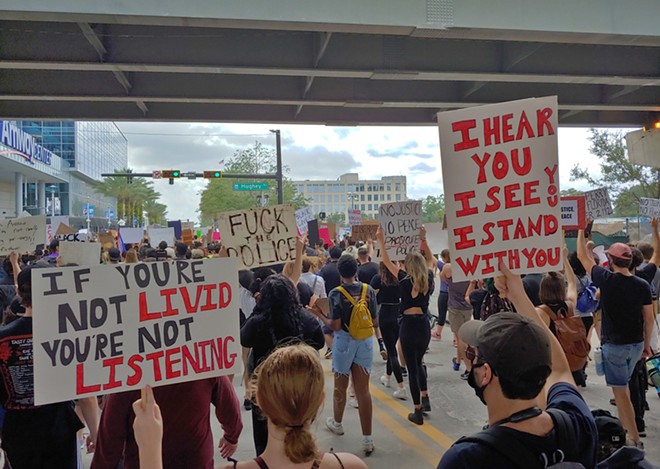 Photo by Dave Plotkin
At the same time that this group was gathering in front of OPD headquarters, as the afternoon progressed into the evening, it seemed as if the crowd in front of City Hall had fully regenerated, nearly as large as before. As night fell, several hundred nonviolent protesters stayed in place, increasingly surrounded by police.

Following a day of solidarity without incident, things took an ugly turn again after dark when OPD used tear gas to disperse this group as the 10 p.m. curfew hour passed.

Minutes after the curfew and a police warning about arresting violators of said curfew, police deployed tear gas to disperse the remaining crowd. According to the Orlando Sentinel, there were reports of scattered rocks and bottles thrown at police. At least one arrest was made in the melée. Once again, though, tear gas is an unnecessary escalation.

Photo by Dave Plotkin
_
Please follow CDC guidelines and Orange County advisories to stay safe, and please support this free publication. Our small but mighty team is working tirelessly to bring you news on how coronavirus is affecting Central Florida. Please consider making a one-time or monthly donation. Every little bit helps.