OW goes to the RNC: Blackjack, Koch-heads and afternoon naps 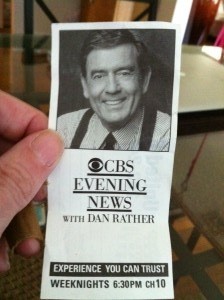 That image you’re looking at, the one of Dan Rather’s smiling face circa 1996, was on the back of the receipt a cab driver gave me last night. Welcome to Tampa, ladies and gentlemen.

So tonight’s the night. The Repubs have officially nominated Willard Mitt Romney for president, Paul Ryan for vice president (who does this for fun), and adopted a platform that (despite it being the dumbest idea in the history of modern economics) has a hard-on for the gold standard and gives a middle finger to the gays (also, no abortions for you, rape victim!). Says Virginia Gov. (and platform committee chair) Bob McDonnell, best known for trying to force protruding wands into lady parts, in his prepared remarks: “This platform is an invitation. It invites every American to consider what kind of country we want to be.”

On this, we agree.

About our afternoon: nothing consequential happened. We went to the Hard Rock Casino—where we heard the Koch brothers were staying, though we didn’t see them, not that we really looked—wherein I promptly gambled away the money we had budgeted for Mons Venus. Billy was terribly disappointed. But really, who hasn’t made out with a Tampa stripper already?