The YMCA of Central Florida will build the new two-story, 24,500-square-foot Family Center at the planned roundabout at Princeton Street and Texas Avenue.

Construction for the new facility, which will be the 23rd location for the YMCA of Central Florida association, will begin in late 2019 and is expected to be operational in 2021, says a statement from Dr. Phillips Charities.

"Dr. Phillips Charities has long been a proud supporter of the YMCA here in Central Florida," said Ken Robinson, president/CEO of Dr. Phillips Charities. "So, as we transform and preserve this special place in Orlando’s history, it’s only natural that we seek to collaborate again to further our vision of building community, health and wellness within The Packing District."

Not a lot of details about the facility were given, other than the site will "play host to key programs for the community while also integrating with the Packing District’s regional park to allow both indoor and outdoor healthy living activities." However, renderings of the site show a covered children's playground, an outdoor pool and a giant waterslide.

According to Dr. Phillips Charities, the facility will have the option to later expand to 40,000 square feet of space. 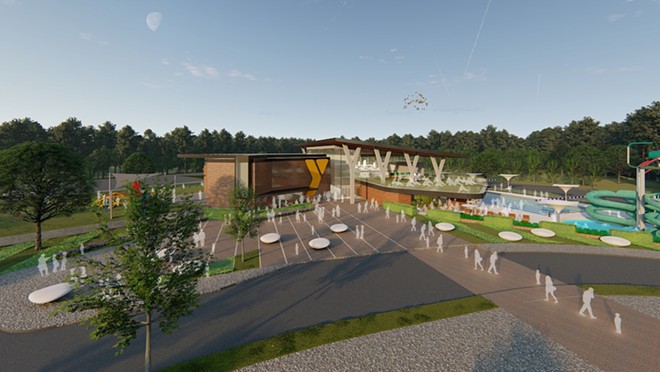 Photo via Dr. Phillips Charities
Named after the area's industrial citrus packing buildings, the $480 million Packing District was announced in November of last year, and is a redevelopment in conjunction with the City of Orlando and Dr. Phillips Inc.

Besides a new YMCA, the 202-acre area will also host the Orlando Tennis Center and a 100-acre park, which will feature bike trails, running trails, an amphitheater and an urban farm.

The whole project is expected to take between 10-15 years, over the course of four phases.