Holy Land Experience might not be closing, but they're praying for a buyer 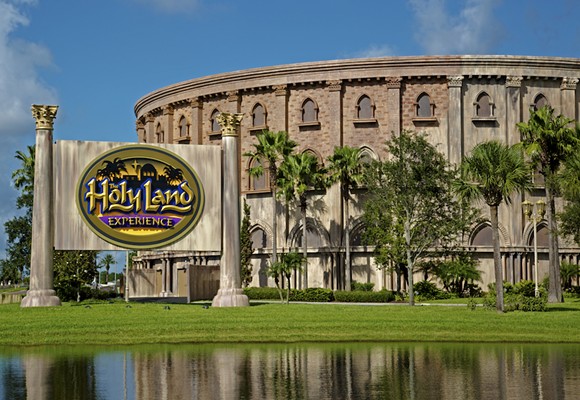 Photo by Zfigueroa/Wikimedia Commons
Update, 4:30 p.m.: Holy Land Experience representative Nate Daniels reached out to us to say the park stands by their earlier statement; he says they're not closing, just exploring their options by assessing the value of the land and the neighboring parcels they own.

"We own property across the street from the theme park and property north of the theme park which is being assessed to understand potential market value to better inform us on how we should be making decisions in the future," Daniels writes. "We are assessing how best to use the park and right now that means keeping it open."

After initially telling us they would remain open – despite scaling back its theatrical productions – the Holy Land Experience is looking for a buyer.

The Crouch family, owners of the park and co-founders of TBN, have had a long history of trying to keep the theme park afloat. These methods ranged from selling thousands of pieces of furniture, decorations, and costumes in an auction, to implementing theatrical productions to attract more customers and generate more revenue. Even after this notable overhaul of daily operations, TBN owners told Orlando Weekly all entertainment would stop, as of as of April 19, and the theme park would return to its former "museum" roots.
The Orlando Business Journal has since reported that the theme park owners have hired a broker, pointing to the high likelihood of the property halting production while being sold to another buyer.

In 2005, The Holy Land Experience was reporting a deficit of $2 million. Financial hardship only continued, as company contributions from Christian television parent company Trinity Broadcasting Network (TBN) plummeted from a hefty $42.7 million to a paltry $2.5 million by 2014, as reported in their financial disclosures to the IRS. In 2014, their reported deficit was $1.39 million.

Despite being registered as an ecclesiastical organization that is exempt from paying taxes – thus avoiding $2.2 million dollars since the exemption was granted in 2006 – the Holy Land Experience has remained in the red for years.

"They saw HLE as a big money pit. They had offers from people who wanted to build strip malls there."


It is presently unclear what the next step for TBN, and how long the Holy Land Experience will continue operating while looking for a buyer. According to Brittany Davidson, the granddaughter of the Crouch family who owns TBN, some members of the company thought the theme park was costing them too much money.

"They saw HLE as a big money pit," Davidson said. "They had offers from people who wanted to build strip malls there."