Photo by Dave Plotkin
Local climate activists were back at Orlando City Hall Dec. 7 for a second "Fridays for Future" protest, calling for policy changes to address climate change.

The sun was out and the temperature cool, but there were far fewer participants than the Sept. 20 strike, which drew around 300 people for the one-hour action.

The climate change movement, said IDEAS organizer Caroline Chomanics, similar to other movements like the Women's March, has its ebbs and flows. She also noted that today's longer protest was spread over three hours, with people joining throughout.

The gathering of Central Florida environmentalists was once again led by IDEAS For Us, an Orlando-based environmental nonprofit, and Fridays For Future Orlando had their first protest on, said organizers, which added to the simultaneous international protest that they say had some 600,000 participants nationally and over 4 million globally.

Organizers say the Fridays for Future protests, started by Swedish teenage activist Greta Thunberg, has ballooned to include activists from over 150 countries. They also noted the state needs to catch up on climate change awareness and action.

"Florida is way behind," said Chomanics of the state's lack of climate-saving oriented policies.

At the protest, the group again aired demands for the city of Orlando, the state of Florida and the U.S. government. They want the city to set a goal of 100 percent renewable energy by 2035; the passing of Florida Senate bill SB 318 which would ban the sale of sunscreens with oxybenzone and octinoxate that kill coral reefs; and a declaration by the federal government of a Climate Emergency. 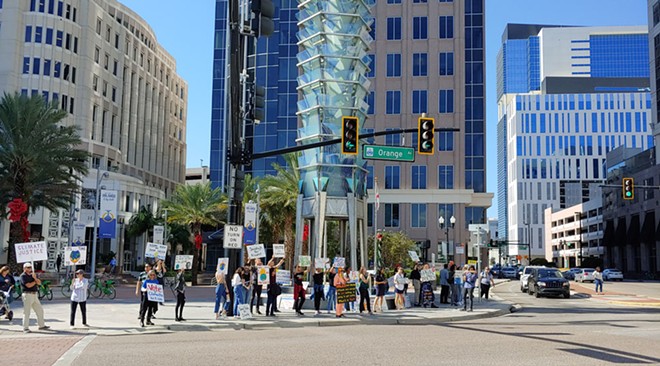 Photo by Dave Plotkin
Standing on the curb in front of City Hall, pointing their signs direction of the intersection, participants hollered chants like "do you know what would be great? Solar in the Sunshine State."

Other chants included; "Hey, hey ... ho, ho, fossil fuels have got to go;" and "No more coal, no more oil, keep our carbon in the soil." The chant leader was a woman dressed as The Lorax, a fictional character in from a children's story about the environment.

There was also a lone counter-protester. A man carried a sign that read "climate change is fake news" on one side and "liberalism is a mental illness" on the other. He said climate change is not the major issue that the protestors think it is, and added that he's skeptical that participants do more than wave signs around, like recycle and compost.

"How many of them drove a car here today?" he asked. He said he drives a hybrid, but only because of the great gas mileage.

Also in attendance was Orlando's state Rep. Anna Eskamani, who has helped organize the protests. Orlando Mayor Buddy Dyer, holding his jacket slung over his shoulder on the nice afternoon, lingered for a moment to watch the protest, a huge smile on his face, before moseying back into city offices.

Organizers say the next protest is planned for Earth Day on Wednesday, April 22.