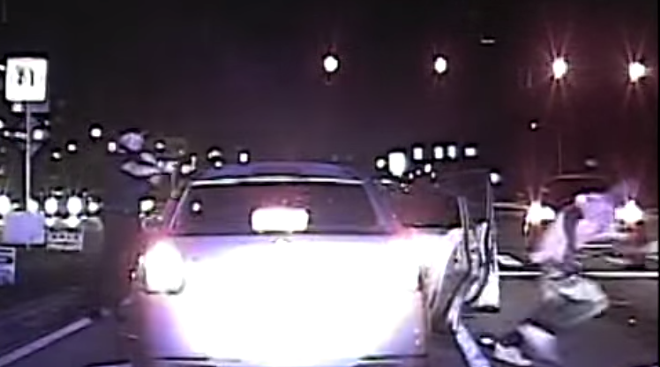 Photo via YouTube
An Orlando Police Department officer was run over by a car while attempting to conduct a traffic stop early Monday morning, June 13th.

The incident occurred after Officer William Anderson stopped a silver four-door vehicle on Kirkman Road and Vineland Avenue, according to Orlando Police.

As Anderson approached the vehicle, the right side door opened and a passenger fled on foot. When Anderson tried to stop the fleeing passenger by moving in front of the vehicle, the driver accelerated the car toward the officer and ran him over without stopping. While being run over, the officer fired his weapon, as can be seen and heard in the video.

The vehicle involved in the incident was found burned with a shattered windshield Tuesday morning at 1859 Lake Pearl Drive.

Anderson is hospitalized and in stable condition, while the two suspects are still at large.

Anyone with information on the suspects whereabouts can call 1-800-423-TIPS.