Orlando media got played by recent Rollins and UCF stories

Photo via Rollins College
This past week, two major controversies embroiled Central Florida colleges, and tripped up local and national media outlets along the way.

It's called gaslighting, and Orlando media took the bait.

At Rollins College, a student was temporarily suspended after accusing his Muslim professor of religious discrimination. Fox News and conservative websites quickly picked up the story on the precocious sophomore at Rollins who was punished for informing his Middle Eastern humanities professor that she was wrong in her Christianity teachings.

The Orlando Sentinel originally ran the story with the headline "Catholic advocate wants Rollins to intervene in student's suspension," which quoted the same claims from the head of a conservative, New York-based Catholic religious rights league. After some more digging, the story was updated when a reporter uncovered court documents showing the professor actually had a "protection against stalking" request against the student for allegedly disrupting class by antagonizing her and calling her "incompetent" in a letter he sent after receiving a failing grade on a class essay.

The Sentinel reports the student also threatened to call in media personalities he knows to complain against the professor (it probably even sounded like this). Oh, the persecution! The student, who at this point sounds like someone who just figured out they don't give gold stars in college, has already been reinstated back at Rollins, according to the Sentinel.

The pattern of victimhood continued at the University of Central Florida, when the Facebook group UCF Underground thought it would be just hilarious if they created an event to teach people how to report undocumented immigrants to federal authorities.
click to enlarge 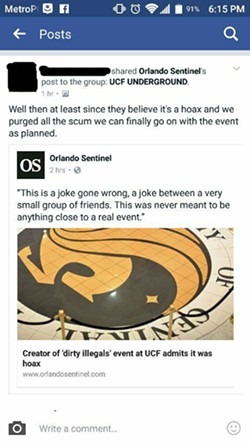 After it went viral on Twitter, members of the group tried to pin it on someone else. When it seemed like campus police were investigating the event, the anonymous creator told the Sentinel the event was "just a joke" between friends.

But from a later online posting on UCF Underground, the creator said the group could "go on with the event" because others believed it was a hoax.

It wasn't just the Sentinel that fell for it, just about everyone ran with this story.

Sure, it's likely the event is fake and more of a way to spark outrage, but that doesn't mean it should be dismissed completely.

As absolutely captivating as trolling and #fakenews is to some, media should be asking someone else questions at this point – specifically, officials at UCF and Rollins.

Whether the UCF Underground event was real or not, undocumented students are still affected by a paralyzing fear of being deported from their families, and officials just expressing the sentiments that "diversity and inclusivity are woven into the fabric of UCF" is not enough at this point.

Those are the students who deserve our attention, not these trolls.

Shitposting, racist memes and trolling, like the kind found on UCF Underground, are common on online message boards among the alt-right, a conglomeration of white supremacists, Neo-Nazis, men’s rights activists and others.

Vox has a pretty good explanation: The point is to distract (sometimes by using humor, ironic hyperbole or fear-mongering) to propagate misinformation, hate speech, and messages of racism, sexism, white nationalism and anti-Semitism. And if you look back at 2016, it definitely had some effect.

Besides the fact that these two stories center on sad, angry white men, they actually have something more pressing in common – they both show how easy it is to manipulate the press.

This week, Orlando media fell for a pump fake and gave a hate group at UCF the platform they always wanted, and a whiny college kid at Rollins got a megaphone he should've never had.

Sometimes passing on a story is just as impactful as writing it, and both of these gaslighting stories were no-win scenarios for local media outlets.

Congratulations, you played yourself.