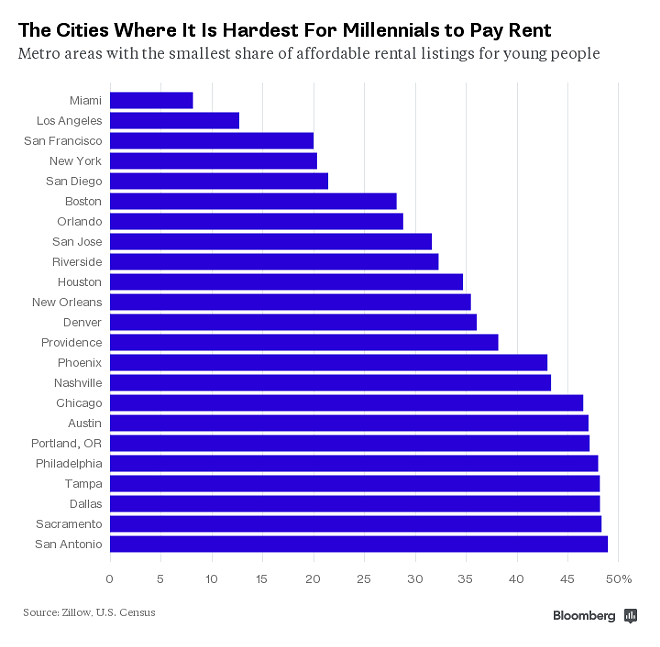 Congratulations, Orlando, for making yet another list – this one as one of the top 23 of the largest 50 cities in the nation where the rent is too damn high. So high that millennials – those born in in the 1980s, 1990s or early 2000s (aka, the Insubordinate Generation that business magazines are constantly trying to give corporate America advice listicles about) – can't afford to move out of their parents' houses. At least not without living in a slummy apartment or having a bunch of roommates.

Bloomberg reports that its real-estate listing site, Zillow, researched what millennials make compared to the number of affordable rentals available in their cities ("affordable" is defined as 30 percent or less of household income) and found that across the nation, only 36 percent of rentals on the market around the nation could be considered affordable for millennials, and in many cities (including Orlando) that number was far lower. Zillow says that less than 30 percent of rentals in Orlando could be considered affordable for those making an average millennial salary. In Miami, the problem is far worse, with less than 10 percent of rental units meeting the affordability mark. That was the least affordable city on the Bloomberg/Zillow list, followed by Los Angeles, San Francisco, New York, San Diego, Boston ... and Orlando at No. 7. In fact, Orlando is practically neck-and-neck with Boston for its dearth of affordable apartments.