Orlando LGBT community to Rubio: We're not your crutch

Photo by Joey Roulette
Celia Ruiz says she has a message for U.S. Sen. Marco Rubio: "My brother is not a crutch."

Ruiz, whose brother Juan Ramon Guerrero was killed with 48 others at the gay nightclub Pulse almost two months ago, was part of a large group protesting a religious conference of about 700 pastors that Rubio and Republican presidential nominee Donald Trump were scheduled to speak at. Activists labeled the "Rediscovering God in America Renewal Project" conference at the Orange County Convention Center as anti-LGBT because several of those attending hold anti-gay views.

Photo by Joey Roulette
Ruiz and others echoed that they were upset Rubio had used the mass shooting at Pulse as the reason for his decision to run for re-election and was now speaking in front of those preaching intolerance. Her brother and everyone else who died was not just a crutch for a political career, she says.

"I'm standing here today outside this conference center mourning my little brother instead of celebrating the next big step in his life," Ruiz says.

"Instead of showing support for us on the two-month anniversary of the massacre that took place at Pulse or working to stop the next mass shooting, Marco Rubio and the Republican nominee for president Donald Trump are headlining a conference hosted by an anti-gay hate group."

"This is a slap in the face to me, to my family, to the other [48] families, to the 53 survivors, to all the people that were there, to the Orlando community. How dare they promote hate and intolerance in our city when we have already seen firsthand what hate and easy access to guns can do to our people?" 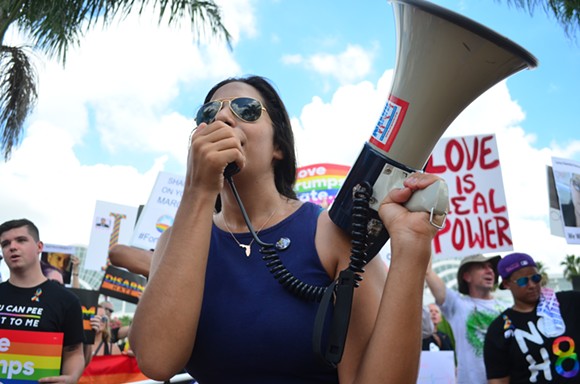 Photo by Joey Roulette
Brandon Wolf, a Pulse survivor who was slated to attend, couldn't make it but sent a letter with his statement, which was read to the crowd. He wrote that he expected this behavior and bigotry from Trump, but coming from Rubio, it felt like he was using Wolf and his friends as props to try to work his way back to relevance.

"The truly appalling one is Marco Rubio, the man who's supposed to guide us, protect us and represent us," Wolf wrote. "This is the man who called himself our ally, and now he's attempting to resuscitate his failed political career by using our pain as a step stool. He's telling us he has our backs while he shoves the knife deeper."

Rubio has defended his appearance, saying he believes in "traditional marriage," and saying the media and liberal activists have labeled the conference an anti-LGBT event when it's actually a "celebration of faith."

Photo by Joey Roulette
Carlos Guillermo Smith, of Equality Florida, tells the crowd the community was proud of the more than 20 Orange County Republican officials who signed a resolution calling for the passage of statewide laws to protect LGBT people from discrimination, and he called on Rubio to join.

"Our message to Donald Trump and Marco Rubio is simple," he says. "If you care about the LGBT community, help us disarm hate and uproot bigotry with action. Or you're going to have a hell of a wake-up call come November."