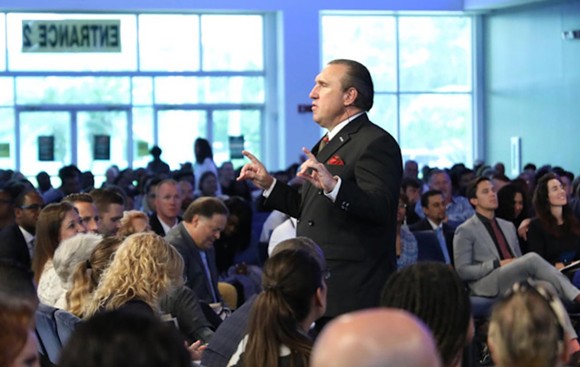 Photo via Follow the River/Facebook
Liberty Counsel chairman Mathew Staver, a guy who once said the “Q” in LGBTQ stands for “pedophilia," will represent Tampa pastor Rodney Howard-Browne, who was arrested today after ignoring local and state emergency orders for holding services at his megachurch last weekend, which potentially exposed thousands to coronavirus.

In a statement released Monday afternoon, Staver argued that the order banning groups of 10 or more from gathering should not have applied to The River Tampa Bay Church, where Howard-Browne is head pastor, and that the church did, in fact, enforce social distancing rules.

“The Hillsborough County administrative order has so many exceptions it looks like swiss cheese,” argued Staver in a statement. “The order allows a wide range of commercial operations that are either specifically exempt or exempt if they can comply with a six-foot separation. Yet, if the purpose of your meeting is religious, the county prohibits it with no exception for the six-foot separation."

A livestream of a worship service from last Sunday, showed a large congregation packed into Howard-Browne’s megachurch, presumably violating the county and state's orders requiring gatherings be fewer than 10 people, and rules on social distancing.

“The problem with this administrative order is it was not reviewed by constitutional experts or vetted by a deliberative body. Neither the Constitution nor Florida law protecting churches and the free exercise of religion disappear,” continued Staver. “This order from Hillsborough County is not narrowly tailored to achieve its underlying objective.”

On Monday afternoon, Howard-Browne turned himself in to the Hernando County Sheriff's Office.

In his statement, Staver also claims that the church gave out hand sanitizer, the six-foot rule was enforced, and that the staff wore gloves. It should be noted that no one in the livestream can be seen wearing gloves, or observing the six-foot social distancing rule. Staver also said the church spent $100,000 on a hospital grade purification system.

Earlier this week, Howard-Browne declared that his church was the "most sterile building in America” and should be deemed an essential business, also arguing that orders for him to shut down violated his First Amendment rights. Howard-Browne then held two services last Sunday.

In response, Hillsborough County Sheriff Chad Chronister issued an arrest warrant for Howard-Browne, charging him with unlawful assembly and violation of public health emergency rules, both are second-degree misdemeanors, punishable up to 60 days in jail, with a maximum fine of $500.

“The River Tampa Bay Church has an advantage over most places of worship,” said Chronister at a press conference, “as they have access to technology allowing them to live stream their services over the internet and broadcast television for more than their 4,000 members to watch from the safety from their own homes. Instead they encouraged people to come and gather at the church, even provided bus transportation for the services.”

On Monday afternoon, Howard-Browne turned himself in to the Hernando County Sheriff's Office.

Staver is probably most well-known for representing Kim Davis, the Kentucky county clerk who refused to issue marriage licenses to gay people back in 2015. But it should also be noted that he has a past of wildly insane notions, like Jay-Z is a known “satanist," and that Pulse first responders probably needed to get tested for “AIDs-related conditions” after the shooting at the gay nightclub that left 49 people dead.

The Orlando-based Liberty Counsel is associated with Jerry Falwell Jr.’s Liberty University, which, coincidentally allowed students and facility to return to class this week, only to have over a dozen report symptoms of COVID-19. ''