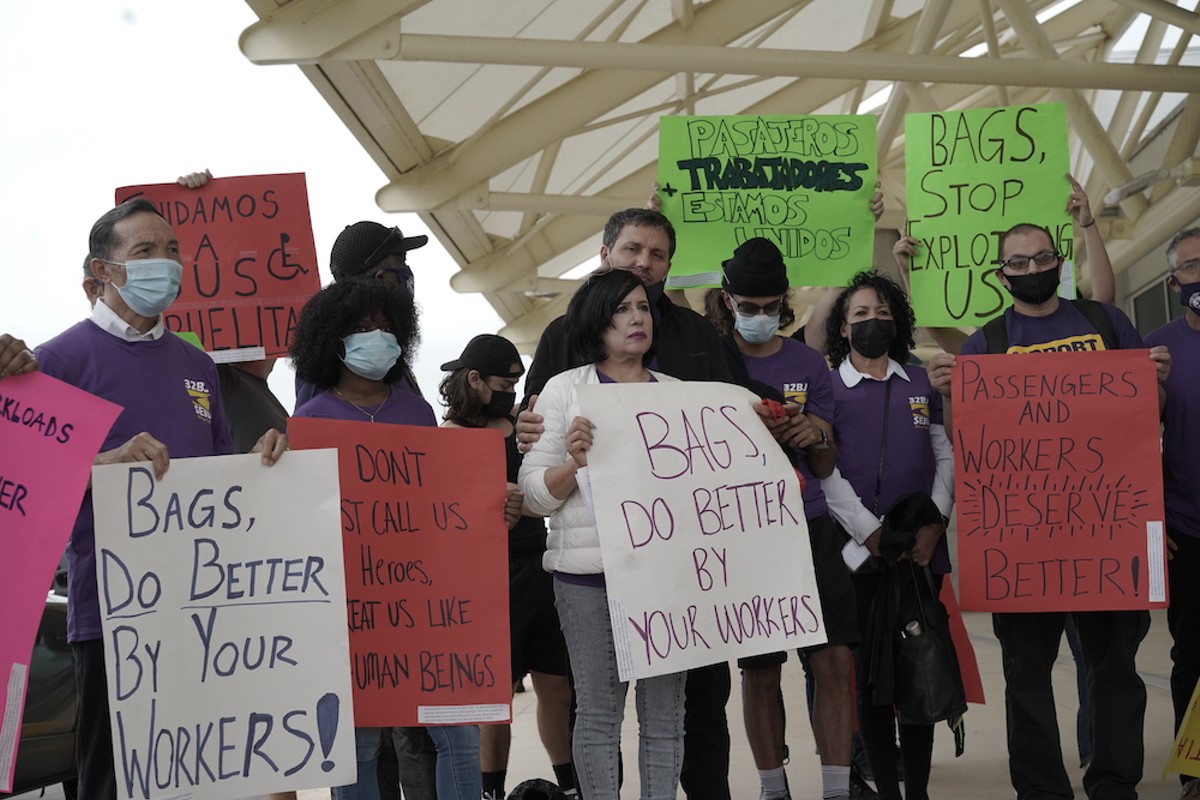 For the second time in three years, contracted workers at Orlando International Airport walked out for a one-day strike to protest short-staffing, low wages and intimidation over union organizing at one of the nation's busiest airports.

Last week's strike, one week before Thanksgiving Day, was part of a national week of action organized by workers with the Service Employees International Union 32 BJ, the largest property services union in the country, representing 175,000 members in 12 states.

Nearly 100 airport workers, members of the labor union, officially walked out Thursday morning. They held a media conference at noon and staged a second demonstration in the afternoon to call attention to their demands for safe working conditions, fair pay and the right to organize without intimidation by their employers.

"We are overworked and underpaid. We need real change so all of us can have a better quality of life. It's tough to get by on $7.98 an hour, and I've suffered injuries on the job," said Jane Spirka, a wheelchair assistant at MCO contracted through Baggage Airlines Guest Services Inc., according to a tweet from the union.

Despite a 57.7% decrease in traffic last year, Orlando International Airport still ranks as the eighth busiest airport in the United States, a gateway to vacation spots like Disney World, the so-called "happiest place on Earth" — which, for the record, recently increased its base pay to $15 for workers due to pressure mounted by organized workers over the course of years.

Orlando International (also known by its airport code, MCO, a holdover from its days as McCoy Air Force Base) consistently ranks among the 10 busiest airports in the U.S. All the while, the union says over 1,000 Orlando airport workers, employed through external contractors, make poverty wages. Some are paid Florida's new minimum wage of $10 per hour.

For tipped workers like Spirka, the wheelchair assistant, it can be even less. Wheelchair assistants at MCO — who are employed by Baggage Airlines Guest Services Inc., a contractor for American Airlines and Frontier — make as little as $7.98 per hour.

"The airline industry, which received a $54 billion sweetheart bailout through the CARES Act, has been under fire for record delays, cancellations, massive layoffs, and labor shortages," the union wrote in a press release. "Meanwhile, many airlines and their contractors, like BAGS Inc., are squeezing their workers and have refused to make airport jobs more competitive by offering living wages and even the most basic benefits like paid sick days."

Wheelchair assistants are paid as tipped employees, despite the fact that tips from passengers are unreliable. Plus, the people who utilize MCO wheelchair services often have disabilities and live on a fixed income. This reliance on tips places the responsibility for workers receiving a living wage on the passengers, rather than the employers.

Orlando International Airport got over $170 million in federal COVID-19 relief assistance, the second-largest bailout for airports in the state, to help the transportation hub weather difficulties imposed by the COVID-19 pandemic, including staff retention.

But no one felt the strain of COVID-19 on airports more than airport workers themselves. According to a SEIU survey of wheelchair attendants at MCO, 42% of wheelchair assistants say they rely on public assistance, like food stamps, just to survive. Seventeen percent reported chronic, debilitating pain, and 10% reported workplace injury, according to SEIU's news release.

"We do love our job, but we're physically and mentally exhausted," Anjanette Reyes, an MCO worker, said on Thursday.

Reyes makes minimum wage and doesn't receive healthcare benefits, vacation or sick pay. Earlier this year, she suffered an injury while trying to lift a passenger from their wheelchair. Then she was out sick for a month, with no pay.

"That pushed me back on bills," she said. With Orlando's cost of living on the rise, earning minimum wage working full-time — let alone going a whole month without pay — isn't enough to cut it. "We do not need to go through this," said Reyes. "This is America, and America is supposed to be there for each and every one of us."

“We’re gonna make sure that MCO is Union Wall to Wall, everybody, so my message to you is NEVER GIVE UP! You are a big part of this airport and you deserve it!” -@UniteHere737 Member Gabe Mejias-Ocasio #1U #UnionStrong 💪💪🏻💪🏽💪🏿 pic.twitter.com/sQoW2Ik0ce

SUPPORT FROM THE LOCALS

Local faith leaders and elected officials also showed up on Thursday, either in person or online, to share statements of support in solidarity with the workers.

Orlando State Rep. Anna Eskamani, a firebrand in the Florida House, shared her own story to illustrate her commitment to worker issues. "Both of my parents worked multiple jobs to make ends meet," Eskamani said on Thursday. "And we always struggled to get by. The only fight my parents would ever have was about money. And that's not OK." Fair wages for workers, she said, is a community issue. "I will never shy away from a tough fight. Especially, full disclosure, with the folks who keep this country, the state, and this city running."

U.S. Rep. Darren Soto, who is currently in Washington, D.C., shared a video and statement online. "It's time to make sure our airport guest service folks are getting treated with dignity and respect, that they're getting paid a livable wage, that they can raise a family and pursue the American dream."

The Greater Orlando Aviation Authority, which manages the Orlando airport, shared the following comment with Orlando Weekly about Thursday's strike: "Let me be clear that those workers are private company workers with the airline[s]. They are not employed by the authority at all," Carolyn Fennell, senior director of public affairs, told OW. She added, "We regret certainly anytime there is concern with any employee at the airport."

BAGS Inc. has a defunct email listed online for its public relations department. Orlando Weekly called BAGS Inc. to request comment. As of publication, OW has not received a response.

A BROKEN SYSTEM FOR WORKERS

As I reported in Creative Loafing Tampa Bay last week during a Tampa airport strike, the airline industry increasingly relies on contractors like BAGS Inc. to provide essential services such as wheelchair pushing, baggage handling and non-TSA security. These contractors, to the detriment of workers, "compete vigorously with each other to see who will win the lowest bid contract," according to the union. What this often leads to, they say, is little to no benefits for workers and "plummeting wages."

Wheelchair attendants at Miami International Airport make $17 an hour, according to one worker who spoke on Thursday. BAGS employees at Orlando International can make less than half that. SP Plus, a publicly traded company that bought out BAGS Inc. in 2018, had a reported gross profit of $46 million for the third quarter of 2021.

The 32BJ SEIU labor union has, for years, worked on campaigns to support Florida airport workers' fight for respect and justice. But local politics, state pre-emption laws and anti-union laws on both a state and federal level render it difficult for workers to unionize and win good contracts.

Workers frequently face intimidation tactics by employers for unionizing — a fact Gabe Ocasio-Meijas, a Starbucks barista at Orlando International employed through HMSHost, knows only too well. Meijas was fired over a year ago from his job at MCO due to what he, and eventually the National Labor Relations Board, determined to be an act of retaliation for organizing.

As a result of the NLRB decision, Meijas was recently able to get his job back. "I stand here in solidarity with every single one of you," Meijas said on Thursday. He said his union, Unite Here, has the votes they need at MCO to file for a union election — which requires a show of interest from at least 30% (ideally closer to 50%) of eligible workers. "We're going to get a union," he stressed on Thursday. "We're going to make sure that MCO is going to be organized wall-to-wall."

The Orlando strike was one of several actions last week organized by 32BJ SEIU, which has won local living wage standards, benefits and union recognition for 32,000 airport workers nationwide.

"Airport workers throughout the country are calling on airlines and their contractors to commit to making airport jobs good jobs by paying their employees what they're worth and offering essential benefits like paid sick days and healthcare," the union said. "If airlines won't step up and make air travel reliable again, then there must be national oversight and accountability, including fair wages and benefits for airport workers — so our airports are safely staffed with well-trained people who have what they need to thrive, not just survive."