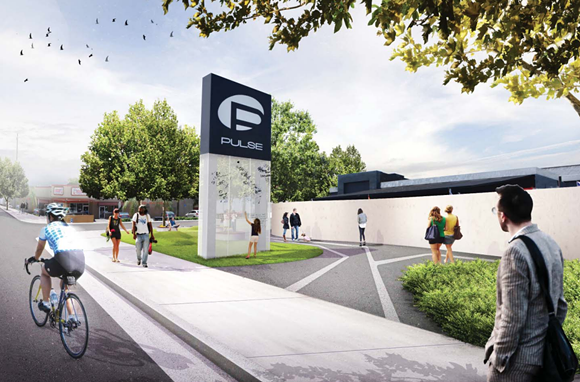 Photo via onePULSE Foundation
A rendering of the Pulse interim memorial
The Orlando City Council approved plans for a temporary memorial at the gay nightclub Pulse Monday afternoon.

Pulse owner Barbara Poma and the onePULSE Foundation submitted plans for an interim memorial as they create a permanent memorial in conjunction with survivors of the mass shooting and families of the 49 victims who died last year. At Monday's council meeting, Poma said part of the reason for creating a temporary memorial at 1912 S. Orange Ave. would be to "clean up the site, make it look less like a crime scene and more like a place where you could come and pay your respects." 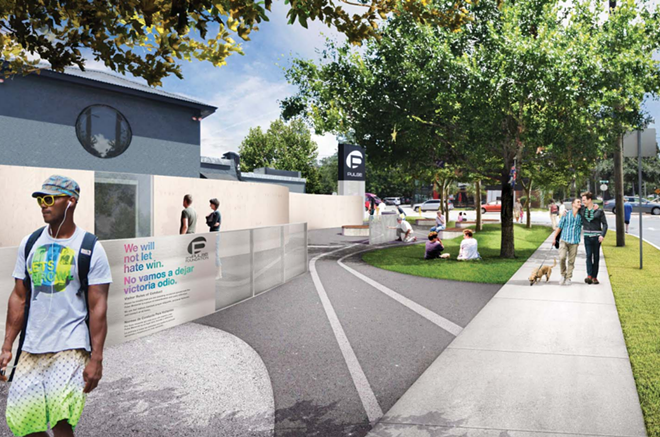 Photo via onePULSE Foundation
There will be several key changes to the current Pulse site. The first is removing the fence installed by the FBI and replacing it with an eight-foot fence that will go completely around the building. Poma says the current renderings show the fence as white, though it will have artistic tribute murals or photos.

As you can see from the design above, part of the fence is clear near the door. Poma says there will framed views to a couple areas on the Pulse building, including the place where police broke down bathroom walls to rescue survivors.

"This seems to be space where a lot of people try to get to – they've climbed the fence, thrown things over, broken into it just to be able to pay respects at that area," Poma tells commissioners. "We think it's an important place for people to be able to get to safely and respectfully."

The plans also include a shorter "offering wall" where people can leave flowers or other tributes in a four-foot perforated fence to honor victims. Poma says there will also be a display with all the names and pictures of the 49 victims and a second viewing area of where the waterfall was at the gay nightclub. The iconic Pulse sign will be secured in an encasement and a removable canvas will be wrapped around its base for people to leave written messages. Additionally, there will be a "survivor grove" area with shady trees to rest, increased lighting, artificial turf, enhanced seating and walkways. 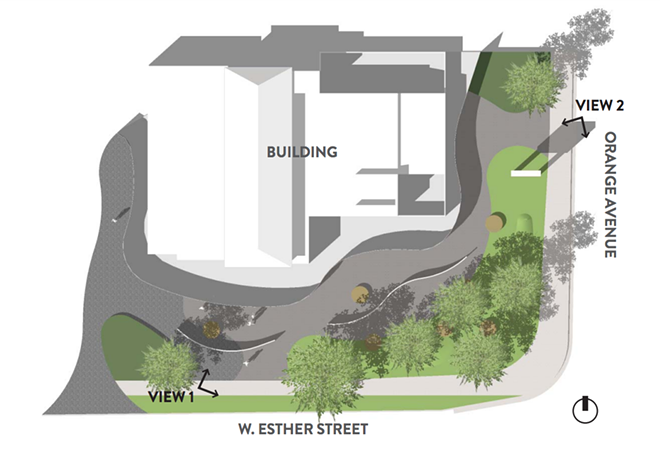 Photo via onePULSE Foundation
Orlando Mayor Buddy Dyer told Poma that city staff is adding a rainbow crosswalk near Pulse on West Esther Street that should be installed this week.

"I think you guys have done a fantastic job on the temporary memorial site," Dyer says to Poma. "It's making it much more accessible. … It's going to be much more friendly to the public."

Poma did not have an exact date for when the interim memorial would be completed, but says she expects the process to move quickly and smoothly. The onePULSE Foundation intends for the interim memorial to exist for up to two years, with three possible one-year extensions, as they work toward a permanent memorial.