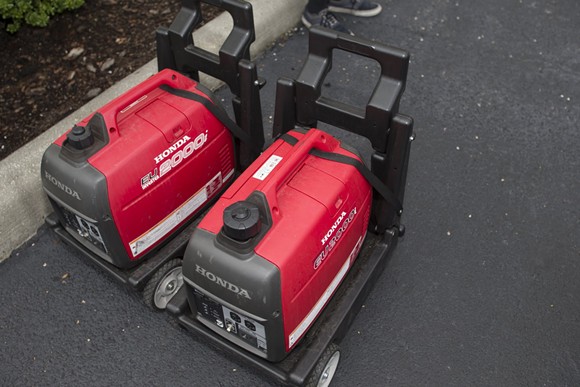 Photo via Orange County
Orange County officials are stressing generator safety in the wake of Hurricane Irma after three people died of carbon-monoxide poisoning from a generator left running inside a local home.

The Orange County Sheriff's Office identified the dead as Jan Lebron Diaz, 13; Kiara Lebron Diaz, 16; and their mother Desiree Diaz Molina, 34. A 12-year-old child also inside the home on the 5600 block of Eggleston Avenue called 911 on Tuesday to report unconscious victims.

When deputies arrived, they found a Coleman Powermate 5000 generator in the garage that had "been converted as an extension of the home," according to a report. The generator was powering a refrigerator, a stand-alone freezer and two fans. After Irma pummeled Orange County and the rest of Florida over the weekend, millions of people were left without power and air conditioning for days amid hot temperatures. The carbon monoxide fumes emitted by generators and other gasoline engines can't be seen or smelled, making them especially dangerous. People with symptoms may start to feel sick, dizzy or weak and need immediate fresh air.

Officials say four people, including the child who made the 911 call, were taken to Florida Hospital. One of the deputies who responded to the scene was overwhelmed by fumes and treated at the scene, the report says.

"I was absolutely heartbroken to learn of the three deaths in Orange County resulting from carbon monoxide poisoning related to the use of an emergency generator," Orange County Mayor Teresa Jacobs said in a statement. "Every life is so deeply valued, and I can only imagine the suffering of the families who have sustained this terrible loss."

Orange County officials warned residents on Wednesday to take precautions when using portable generators after a disaster. Never use a generator indoors, in garages, basements, crawl spaces or areas that are not well-ventilated. Some other tips from the county include:

- Follow the instructions that come with your generator and install carbon monoxide alarms inside your home.
- Connect your generator to appliances with heavy-duty extension cords because connecting directly the home power supply could energize the outside power lines or bypass built-in circuit protection devices. That could create a dangerous situation for utility workers, who could be electrocuted.
- Never store fuel for your generator inside the house's living areas or fuel-burning appliance. When it's spilled, fuel vapors can travel and light the appliance.
- Before refueling a generator, turn off the power and let it cool; otherwise, fuel spilled on hot engine parts could create a fire.
- Take the necessary precautions. Don't think opening windows or using a fan will stop carbon monoxide from gathering in the house. If you are experience carbon monoxide poisoning symptoms, seek immediate medical attention and call the authorities.

"Sadly, Orange County is not alone, as neighboring counties have also suffered the loss of life due to carbon monoxide poisoning," Jacobs said. "As we continue to recover from Hurricane Irma, I’m asking all Central Floridians to please be sure to observe safety procedures and do not use generators inside your home, your garage, or your business."